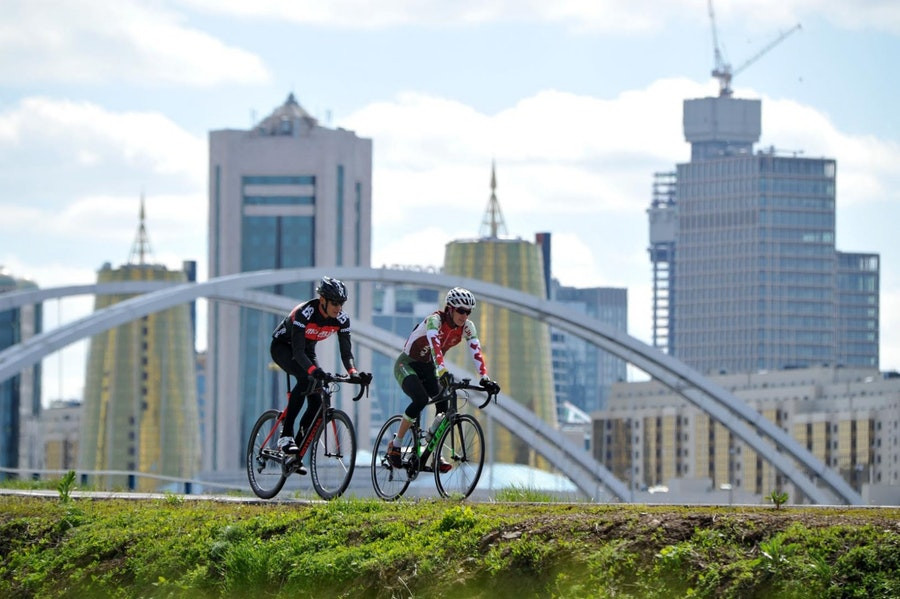 Astana is set to host its first-ever International Triathlon Union (ITU) World Cup tomorrow with qualification points for the Tokyo 2020 Olympic Games up for grabs in Kazakhstan’s capital.

The Olympic-distance course takes in the waters and surrounds of the Esil River, including two crossings on each of the six laps of the cycle route before the three-lap run sees athletes navigate the park on which the famous Astana Music Hall stands.

Both the men’s and the women’s races boast extremely strong fields for the fifth stop of the ITU World Cup season.

With three World Triathlon Series (WTS) appearances under his belt already this year, Germany’s Jonas Schomburg returns to the men’s circuit and will be one to watch if he can put together another strong display on the bike and adapt quickly to the course.

Frenchman Aurelian Raphael’s brilliant win in South Korean city Tongyeong at the end of 2017 will also see him bring renewed confidence to his first World Cup of the year.

The United States’ Tony Smoragiewicz could be a name to look out for if he can emerge from the water in a strong position, while the exciting Hungarian pairing of Tamás Tóth and Bence Bicsák may well be able to inspire each other to medal-winning performances.

"I’m happy with recent results but it has all come after a lot of hard work," Bicsák, who arrives after a brilliant fifth-place finish at last weekend's WTS event in Yokohama, said.

"Yokohama was incredible for me but after the long trip I’m now excited for this race."

Tomorrow will also see the first outing for the new-look ASICS World Triathlon Team, following the sports company’s new sponsorship of Team ITU at the start of the year.

Like Schomburg, ASICS World Triathlon Team’s Domen Dornik of Slovenia arrives in Astana off the back of a solid display at last month's WTS event in Bermuda.

In the women’s event, a strong Russian contingent lining up will include Elena Danilova, an athlete who always finishes strongly and could be ready to make her return to the World Cup podium for the first time in two years.

Another bike specialist, Ukraine’s Yuliya Yelistratova, arrives in Kazakhstan having secured a top-10 finish in Chines city Chengdu at the start of the month, while Spain’s Camila Alonso and Anna Godoy, along with Italy’s Angelica Olmo, will also want to build on their positive starts to 2018.

Great Britain’s Lucy Hall knows exactly what it takes to win at this level after finishing first in South Africa's capital Cape Town last year, and she will hope to bounce back to medal-winning form in Astana.

"I have set a few process goals that I want to hit through this race.

"A lot of athletes will be looking at this as a points race for Tokyo, but I’m just enjoying the Astana experience."

The experienced figures of Hungary’s Zsófia Kovács and South African Gillian Sanders will also be looking to keep pace with the leaders and make a push for the podium.

The ASICS World Triathlon Team will be represented by Estonia’s Kaidi Kivioja, who already has two top-15 finishes under her belt in 2018, and Iceland’s Edda Hannesdottir.

The race is the first on the ITU World Cup circuit to offer qualifying points for Tokyo 2020.

The WTS event in Yokohama signalled the start of qualification for the World Series athletes.