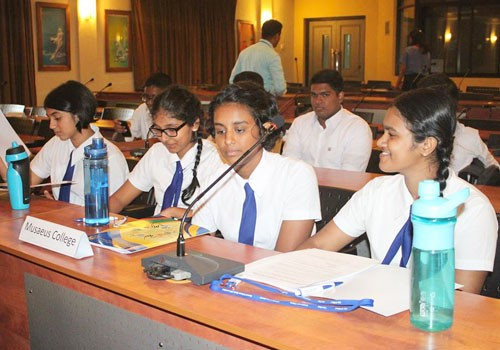 For the first time in the history of the Sri Lankan Olympic Committee, the governing body organised an inter-school debate programme on Olympic educational values.

As part of the pilot programme, 10 leading schools from Colombo and Kandy were selected on the direction of the Ministry of Education.

After awareness events were held in both cities, the first round of the debate programme was held before the quarter-finals, semi-finals and finals.

The final, between Sirimavo Bandaranaike Vidyalaya and Mahamaya, took place at the Rupavahini Corporation's studio, located at the Open University of Sri Lanka.

They will now be offered the chance to visit Ancient Olympia, the birth-place of the Olympics in Greece.

Sri Lanka has won two Olympic medals in its history - both silver and both in athletics.

Duncan White - of British descent but born in Sri Lanka - won the country's first Olympic medal in the men's 400 metres hurdles at London 1948.

Susanthika Jayasinghe then won silver in the women's 200m at Sydney 2000.

She originally came third in the Australian city, but initial American winner Marion Jones was later disqualified for doping.