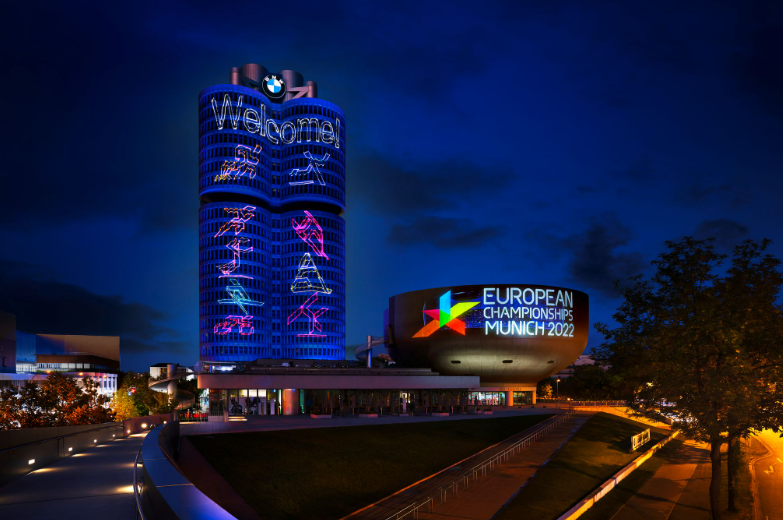 The ECM added that the figure was "the equivalent of every person in Europe watching at least one hour of the innovative multi-sport event."

More than 40 free-to-air channels were involved in broadcasting the second multi-sport European Championships, and in terms of online media the reported audience reach was 1.46 billion people.

The respective audience reach figures for print and social media were, respectively, 1.69 billion and 1.04 billion.

"Each of the nine participating sports contributed significant broadcast and viewer hours in almost all countries across Europe," the ECM added.

"With one of the powerful value drivers being the building of the TV audiences over the course of the event, the average market share increased over the first four days in all the big markets.

"Major broadcasters showed 10 hours a day for 10 days and all sports delivered above the annual market share average in these markets."

ECM said that the research confirmed the overall media success of an event that also attracted 1.47 million visitors to experience the sports and festival in the Olympiapark, the city centre and other venues in the Bavarian capital.

The ECM added: "The research figures speak for themselves and leave no doubt that the multi-sport European Championships was once again a spectacular success for the stakeholders and that the power of aggregation works for all of them.

"The outcome could not have been achieved without the courage and faith stakeholders showed in committing to the event philosophy of ‘the whole being greater than the sum of its parts.'

"Glasgow/Berlin 2018 was an outstanding inaugural edition and the second edition in Munich was where vision became reality as we all saw the spectacular benefits of bringing the individual European Championships of nine sports into one single location to create a festival of elite sport.

"We are already working closely with the participating sports who share a vision to repeat the Munich concept in 2026 by uniting the continental championships of between seven and 10 sports with one of Europe’s leading cities to create another must-watch, must-attend event experience."

Schöne added: "These impressive figures are not the only proof that we have succeeded in realising our vision, setting new standards, and leaving a lasting legacy.

"With Munich 2022 we have reached millions and millions of people, analogue and digital, on-site, on TV, on air and on the web.

"Munich, Bavaria, and Germany presented themselves to Europe and the world in an excellent, peaceful, and cosmopolitan manner.

"The images, experiences, and emotions will resonate for a long time to come, providing new impetus and stimulating discussions.

"Munich 2022 demonstrated that it is possible to successfully and sustainably create and host a major multi-sport event with joint forces and new ideas, with existing infrastructure and committed partners - and to the satisfaction and benefit of all involved.

"The overwhelmingly positive feedback from athletes, spectators, partners, and sponsors speaks for itself.

"I wish and hope that the idea and the concept of our European Championships Munich 2022 will serve as a blueprint for future host cities and will be further developed."

European Athletics, which combined its biennial European Championships with the multi-sport events in 2018 and 2022, announced in June that it would be reverting to stand-alone Championships in future.

But on the eve of the Munich 2022 athletics programme European Athletics President Dobromir Karamarinov said the federation supported the multi-sports concept for quadrennial European Championships but needed to make "important adaptations" before deciding its future after Munich 2022.

"European Athletics is extremely happy with the value of the multi-sport concept," Karamarinov said in a media conference.

"But we think that we really need to make some important adaptations.

"It’s a process, and we will keep people informed.

"Right now I cannot give a straight and clear answer because we have to study everything and we have our decision afterwards.

"It doesn’t concern our next Championships - they obviously stand alone in Rome in 2024.