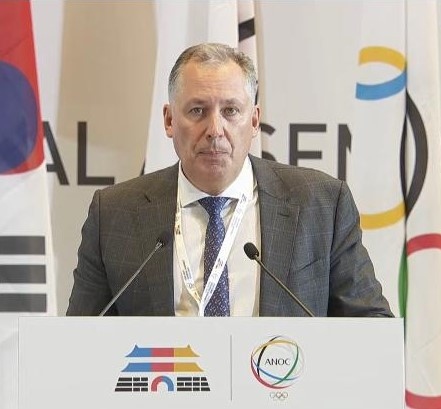 Natorp was among several delegates that left the room when Pozdnyakov, who is chair of the ANOC Culture and Education Commissiojn, showed the video that featured a series of activities in Russia.

Both of the events shown took place after Russian President Vladimir Putin ordered the invasion of Ukraine in February.

The Danish official told insidethegames that he felt "uncomfortable" and decided to leave the hall with two members of the DIF team.

"I respect the fact that the Russian NOC is the chair of the Commission," said Natorp.

"If he had kept it in the context of ANOC I would have stayed but I found the video presentation being inappropriate propaganda for Russia so I decided to leave the room.

"I felt like I was in the wrong place at the wrong time so I couldn't stay.

"I saw several [delegates] out here but I can't give you any reason for them being here."

Pozdnyakov's report include two videos capturing images from the International Forum of Young Olympians staged in Moscow in June and the seventh edition of the Children of Asia International Sports Games held in July in Vladivostok.

The Russian official claimed that 250 athletes from across Russia, Belarus, Armenia, Uzbekistan and China particpated in the International Forum of Young Olympians.

Pozdnyakov also said that more than 1,500 youngesters from 30 countries of Asia and eight regions of Asia took part in the Children of Asia International Sports Games, with the video showing boxing, breaking, judo and table tennis competitions.

Following the report, which also included a proposed to create a "network of Olympic Museums, ANOC Acting President Robin Mitchell thanked Pozdnyakov and asked for questions from the floor but none came forward.

Pozdnyakov has been chair of the ANOC Culture and Education Commission since 2018.

The presence of the ROC at the ANOC General Assembly in South Korean capital Seoul has drew opposition from some countries.

Mitchell confirmed that it had received calls from 11 National Olympic Committees to reconsider its stance, with the DIF among those.