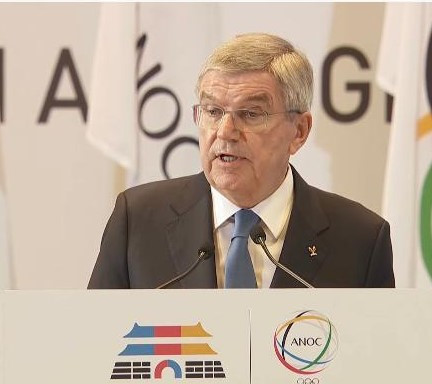 Bach rallied against National Olympic Committee (NOC) and Sports Confederation of Denmark (DIF) President Hans Natorp, who he rebuked for using the phrase "the Russians", and told him that the organisation should "reflect on its role" as a member of the Olympic Movement.

"We will not paint everybody with the same brush because of the actions of their Government," Bach added.

His response drew some applause from delegates,

Earlier, Bach had again outlined the IOC's position on the war in Ukraine during an hour-long speech during which he conceded the situation represents an "unsolvable dilemma".

He claimed Russia's recent escalation of the conflict as an example of how it has "deepened its violation of the Olympic Charter", and warned it showed that "the sanctions against the Russian and Belarusian states and Governments must and will remain firmly in place".

These sanctions include a recommended ban on national symbols of both countries at both sports events.

The Russian Olympic Committee and NOC of the Republic of Belarus (NOCRB) have both been permitted to attend the General Assembly as recognised members of the IOC who have not been suspended.

Initially, neither NOC had their flags on their desks, but these were later added during the General Assembly.

#Russia and #Belarus are set to attend the #ANOCGA2022, but neither country's flag is in the room in #Seoul.

The IOC has also urged International Federations to exclude athletes and officials from Russia and Belarus from competitions as a "protective measure", which Bach claimed was due to Governments "undermining our autonomy by deciding who would be allowed to participate".

"We did so with a very heavy heart - because they concern athletes and sports officials who did not start this war, who are not responsible for this war," Bach said.

"Athletes should never be the victims of policies of their own Government.

"This situation puts us in an unsolvable dilemma.

"On the one hand, we cannot fully live up to our Olympic mission, which is to protect the athletes and to unite the entire world in peaceful competition.

"We have insisted on this principle because we all agreed that such a unifying peaceful competition is at the core of our mission.

"Now, unfortunately, in this unique situation, the only way to protect this mission was to recommend the non-participation of athletes just because of their passport."

Bach also warned delegates: "Today it is Russia and Belarus.

"But if we let politics take over sport then tomorrow it will be you."

During his speech, Bach explained the IOC's reasoning for not including Russian and Belarusian elected representatives in its recommendations.

"Sanctions can and should only be imposed on those who are responsible for something."

He insisted that the IOC's recommendations should be followed by sports organisations to the letter.

The presence of the ROC and NOCRB at the ANOC General Assembly has drew opposition from some countries, with ANOC Acing President Robin Mitchell acknowledging that it had received calls from 11 NOCs to reconsider its stance.

This was discussed at the Executive Council meeting yesterday, which confirmed that both countries would be permitted to attend as they are recognised by the IOC.

One of the critical NOCs was the DIF, for whom Natorp questioned the decision given that decision of the equivalent body in Ukraine to join virtually.

"It should be the opposite.

"We need unity - this is built on the principles of the UN [United Nations] and Olympic Charter."

Bach responded by insisting that "unity also means we are in a democratic organisation here, to respect the clear majority".

The NOCs of Norway and New Zealand - two other opponents of the ROC and NOCRB's presence - also issued statements to the General Assembly.

Others, including Sri Lanka and Panama, put forward arguments that athletes should not face punishment for "political" reasons.