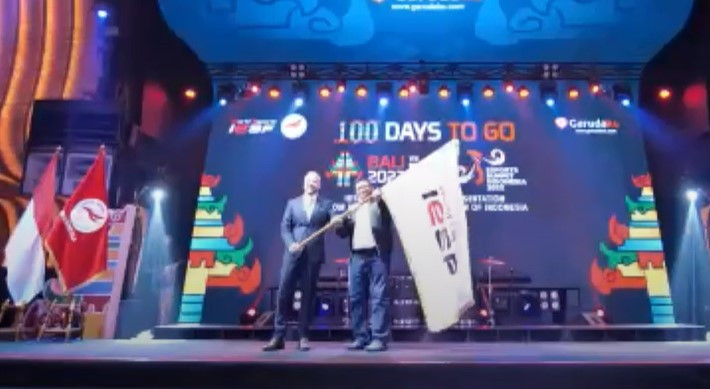 The International Esports Federation (IESF) has celebrated the 100-days-to-go milestone for its World Esports Championships in Bali.

Indonesian capital Jakarta set the stage for the countdown event prior to the 14th edition of the global competition.

"It is the pleasure of the IESF to mark this momentous occasion with a particular milestone that has been crossed," said IESF President Vlad Marinescu in a pre-recorded message as he was unable to attend in-person.

"The first is the acceptance and the inclusion of Pengurus Besar Esports Indonesia (PBESI) as an official member of IESF, uniting the esports family of Indonesia before of course culminating in the beautiful country of Indonesia and Bali in December this year with the 14th World Championships.

"We have 100 days to go to unite the entire esports family together in one place, to game together, to grow together, to support one another.

"I would very much like to congratulate President [Budi] Gunawan for this tremendous challenge and success of joining the IESF family.

"We look forward to the collaboration and cooperation.

"Together with your team, I am certain that the esports development will go at a fast pace, that esports as a daily influencing factor in the lives of many Indonesian people will be continued to be supported, and the message of development will be delivered in a correct, efficient and outstanding way."

Indonesia has several esports bodies, including the Indonesia Esports Association which was formed in 2013, but national governing body PBESI claims to represent all organisations in the country.

For the first time, the IESF World Championships are set to feature more than 120 participating countries.

"This is a very crucial moment for the whole world of esports, some of you are aware of that, some of you are not, but after Bali you will 100 per cent sure what the championships will do for the community," said IESF secretary general Boban Totovski.

"It is my pleasure to be able to give the certificate to PBESI to become official members of IESF which now has 130 members, making it the largest esports organisation in the world."

Dota 2, Tekken 7, Counter-Strike: Global Offensive and the eFootball series will return to this year's World Championships and mobile games PUBG Mobile and Mobile Legends: Bang Bang will be featured for the first time.