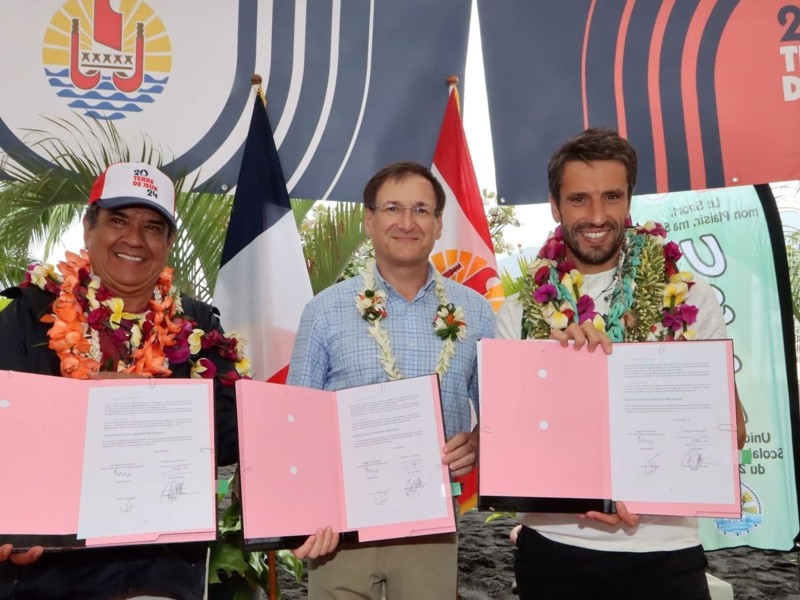 French Polynesia President Édouard Fritch has signed a principle agreement for the territory, which includes the planned Paris 2024 surfing venue host Teahupo’o on the island of Tahiti, to feature in the Olympic Games Torch Relay.

The Organising Committee has recently played down concerns over the development of the Athletes' Village in Teahupo’o, and Paris 2024 President Tony Estanguet made a six-day visit to Tahiti.

Paris 2024 has claimed that the three-time Olympic canoe slalom gold medallist returned from Tahiti "with the confidence that all the requirements will be met to stage a breath-taking and unforgettable Olympic surfing competition".

During Estanguet's visit, Fritch signed an agreement affirming French Polynesia's commitment to take part in the Torch Relay for Paris 2024.

"I would like to reaffirm the desire of our Government to work alongside the State, Paris 2024, the municipalities and our 'sports and youth' associations, so that this major event, the Olympic Games, remains in the memory of the Polynesians and that they can benefit from the legacy of the Olympic values that these Games will leave," Fritch said.

Estanguet expressed his belief in the success of his visit to Tahiti.

"This visit is extremely positive," he said.

"I would like to thank the Government of French Polynesia, the local elected officials, the Haut-Commissariat [French State], all the municipalities concerned, the sports movement and all those who are mobilised on a daily basis to ensure that this project progresses well.

"The organisation of the Olympic and Paralympic Games is a collective effort, and I wish to extend my appreciation for the cooperation.

"Throughout our stay, we were able to feel the enthusiasm and the growing interest of the population and the territories.

"We were blown away by the energy and strong desire to be part of the Games' adventure.

"You can feel the pride, and desire to share their unique culture.

"It was very inspiring for us."

Paris 2024 sports director Jean-Philippe Gatien joined Estanguet in observing the Teahupo'o site during its use for a World Surf League Championship Tour event.

Gatien insisted that Tahiti would prove a worthy surfing host at Paris 2024.

"When we chose Tahiti, it was above all for sporting criteria," Gatien said.

"We gave priority to the competition conditions, offering athletes one of the most beautiful, exclusive and spectacular places to surf in the world, which guarantees the highest level of performance.

"At this time of the year, Tahiti offers the best experience to the athletes and maximises the opportunity to benefit from optimal conditions for surfing."

Estanguet described Tahiti as "the cradle of surfing."

Surfing is set to make its second consecutive Olympic appearance having debuted as an additional sport at Tokyo 2020, and has been added to the core programme from Los Angeles 2028.