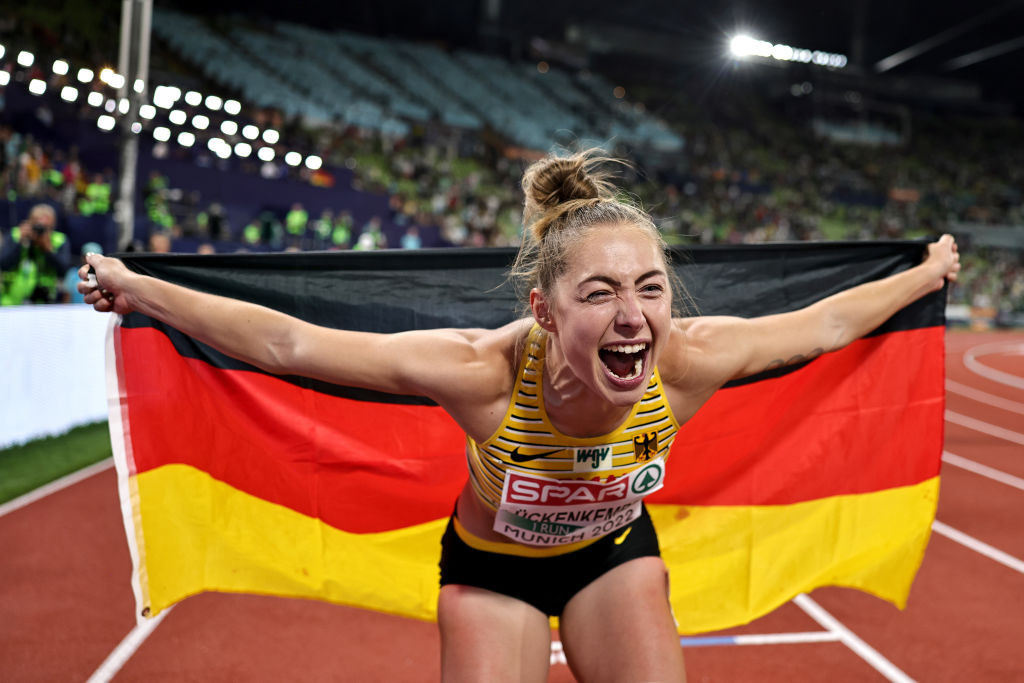 Germany’s Gina Luckenkemper sent a home crowd already supercharged with emotion by the dramatic victory of home decathlete Niklas Kaul into further delirium as a desperate lunge for the line earned her the European women’s 100 metres title by five thousandths of a second.

Earlier on a heady evening of athletics here Jakob Ingebrigtsen completed one half of his defence of the 1500 and 5,000 metres double he earned as a 17-year-old in Berlin four years ago, winning the latter with imperious ease.

Immediately preceding the women’s sprint Italy’s Olympic 100m champion Lamont Jacobs earned his first European title in a Championship record-equalling 9.95 seconds, with Britain’s defending champion Zharnel Hughes second in 9.99 and a jubilant Jeremiah Azu, who won the British trials but did not have the qualifying time to get to the World Championships, earning bronze in a personal best of 10.13.

Luckenkemper was sixth at the halfway point of the women's 100m but drove herself closer and closer to the Swiss athlete who seemed to have gold in her grasp, Switzerland’s world indoor champion Mujinga Kambundji, earning fame everlasting with a final effort that catapulted her to the track and left her requiring medical treatment to a bleeding hand.

The 25-year-old silver medallist from the 2018 European Championships received the news that she had earned gold, after she and Kambundji had both been timed at 10.99, almost with bewilderment before letting out a primal scream.

Britain’s Daryll Neita took bronze in 11.00 but her British team-mate, defending champion Dina Asher-Smith, once again found her hamstring undermining her efforts at the highest level, eventually jogging over the line after pulling up halfway.

Earlier in the men's 5,000m, Ingebrigtsen had taken over the lead with 1,000m remaining and held off the final bend challenge of Spain’s Mohamed Katir before driving clear down the home straight to cross in 13:21.13.

On Thursday (August 18), he will attempt the second half of his projected double.

Sandra Perkovic earned a historic sixth successive European women’s discus title as an effort of 67.95m made her the athlete with the most European titles at one event - male or female.

The 32-year-old Croatian, Olympic champion in 2012 and 2016, made history in her event last month in Oregon as she became the first athlete in the women’s discus to win five world medals - starting at Moscow 2013, where she won the first of her two world titles.

Now she has surpassed the European mark of five she shared with Poland’s Olympic hammer throw champion Anita Wlodarcyzyk, out of action this season after injuring her leg while apprehending someone who tried to steal her car, and Igor Ter-Ovanesyan, who won five long jump titles for the Soviet Union between 1958 and 1971.

As she had predicted with a glint in her eye ahead of this competition, Perkovic was able to head off a big German challenge led by Kristin Pudenz, whose fifth-round personal best of 67.87m was only enough for silver.

In the men's decathlon Kaul prompted some of the greatest scenes ever witnessed in this historic arena as he overhauled Switzerland’s long-time leader Simon Ehammer with inspired performances in the concluding javelin and 1500 metres to secure a dramatic victory.

Ehammer had managed only 640 points in the javelin with an effort of 53.46m, with Kaul setting the stadium in a ferment with a third and final effort that soared out to 76.05m, carried by the huge roar of more than 60,000 spectators in this bowl of a stadium, and moved him up to third place with the 1500m, another of his best events, still to come.

That was not far short of his 2019 personal best of 79.05m in Doha - and easily his best effort since having shoulder surgery in 2020.

All to run for as far as Kaul was concerned…

And run he did, driving himself clear, urged on by ear-buzzing noise, eventually crossing the line 70 metres clear of his nearest opponent in a huge personal best of 4:10.04.

Ehammer, exhausted, stumbled home last in 4:48.72 before hitting the deck.

Niklas Kaul 🇩🇪 is the European decathlon champion in #Munich2022 with 8545 points! 🙌

But in the spirit of the event he was soon up and congratulating Kaul as a supersonic roar greeted the news that the German was golden once again with a total of 8545 points.  Ehammer - who won world long jump bronze last month - was second in a national record of 8468.

Silver went originally to Britain’s Jacob Fincham-Dukes on countback from Sweden’s Thobias Montler as both registered a best of 8.06m, a distance also reached by fourth-placed French jumper Jules Pommery.

However as a result of an appeal after the competition by the French team the Briton's best distance was annulled on the grounds that his toe was over the line and he finished fifth with a best of 7.97m with Montler and Pommery moving up for medals.

Earlier in the day Malaika Mihambo of Germany, whose defence of her European long jump title on home soil was in doubt because of a COVID infection, returned to business as usual as she qualified comfortably for the final, set for August 18.

Having raised the alarms with a first-round foul, Mihambo, the Olympic and double world champion, flew out to 6.99m, clapping her hands as she emerged from the pit after an effort that comfortably exceeded the qualifying mark of 6.75.

Antigoni Ntrismpioti of Greece, who fits in her training around working as a waitress in her family’s restaurant, earned a breakthrough gold aged 38 in the women’s version of the 35km race walks that started and finished at Odeonsplatz in the city centre in conditions of gruelling heat.

Spain’s Miguel Angel Lopez, a former world and European champion over 20km, won the men’s 35km race walk after seeing off the challenge of favourite Perseus Karlstrom of Sweden, who dropped out with 10km remaining.