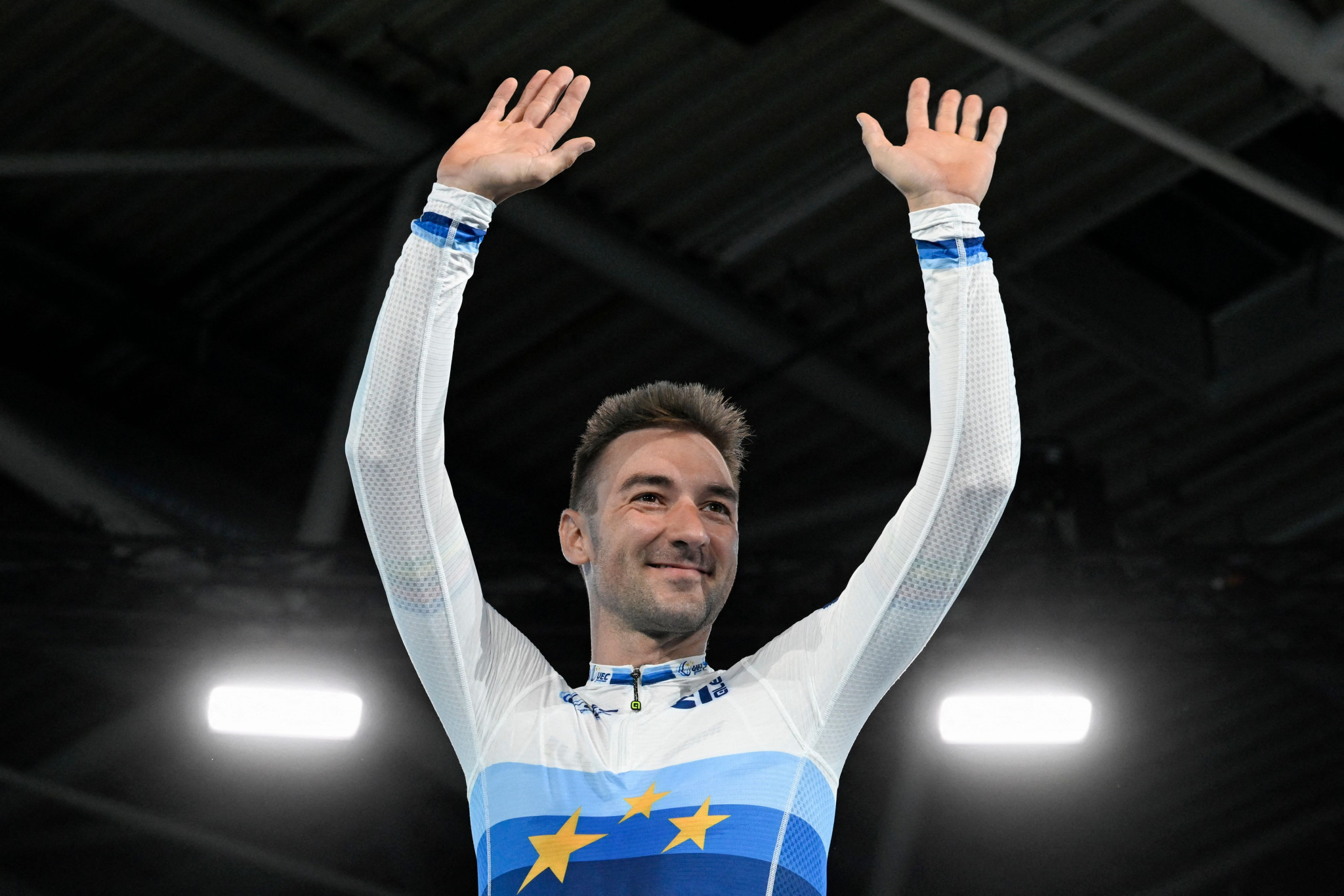 After more than four hours of riding in the men's road race earlier in the day, Italian sprinter Elia Viviani claimed the gold medal in the elimination race on the track at the Munich 2022 European Championships, ending off a busy day for him in Germany.

Viviani was seventh in the road race, finishing near the front of a 21-rider bunch sprint.

Dutchman Fabio Jakobsen crossed the line first in 4 hours 38min 49sec and was joined on the podium by Arnaud Demare of France and Tim Merlier from Belgium.

Viviani returned later for the track cycling, being the last man standing in a field of 16 to win the elimination title, crossing the line in front of Germany's Theo Reinhardt with a surge.

Jules Hesters of Belgium was the bronze medallist.

Silvia Zanardi of Italy accrued the most sprint points, finishing with a total of 53 to take silver in front of Victoire Berteau of France on 47 for bronze.

Sébastien Vigier of France claimed the men's sprint gold medal in a decider against Britain's Jack Carlin, who is still looking for an elusive gold on the track in major competition, taking his seventh silver.

Rayan Helal joined his compatriot Vigier on the podium after beating Briton Hamish Turnbull in consecutive races for bronze.

Jessica Gadirova claimed gold for Britain in the last artistic gymnastics event of the Championships, the women’s floor exercise, executing her routine marginally better than Italian Martina Maggio for a score of 14.000.

She retained her title in the process.

With the same difficulty of 5.700, Maggio's execution score was lower, finishing on 13.933, while her compatriot Angela Andreoli was third with 13.866.

Germany took golds in the uneven bars and balance beam thanks to Elisabeth Seitz and Emma Leonie Malewski.

Lorette Charpy from France was the bronze medallist with a score of 14.166.

Malewski was rewarded for a better routine at a lower difficulty in the balance beam, defeating Britain’s Ondine Achampong and Carolann Heduit of France.

She scored 13.466 in front of her fellow medallists on 13.400, with Achampong taking silver due to having a better execution score.

Finally, Zsofia Kovacs from Hungary was the clear winner in the vault final with a score of 13.933, in front of Asia D’Amato from Italy and Aline Friess from France on 13.716 and 13.599 respectively.

The German quartet of Valentin Wernz, Nina Eim, Simon Henseleit and Laura Lindemann took silver, 33 seconds down on the winners, assisted by the work of their anchor leg.

Sixteen seconds further back were Max Studer, Cathia Schär, Simon Westermann and Julie Derron of Switzerland, who completed the podium.

In sport climbing, Olympic champion Janja Garnbret from Slovenia took the women's boulder title after reaching the top on two occasions, whilst also making zone two on her opening climb.

This was enough to defeat Hannah Meul of Germany, who also reached the top of two occasions.

Oriane Bertone from France was the bronze medallist.

Both reached 37+ to finish first and second, with Ondra climbing to that point in 3min 01sec to the Slovenian's 4:05.

Alberto Ginés López from Spain was third on a best climb of 35+.