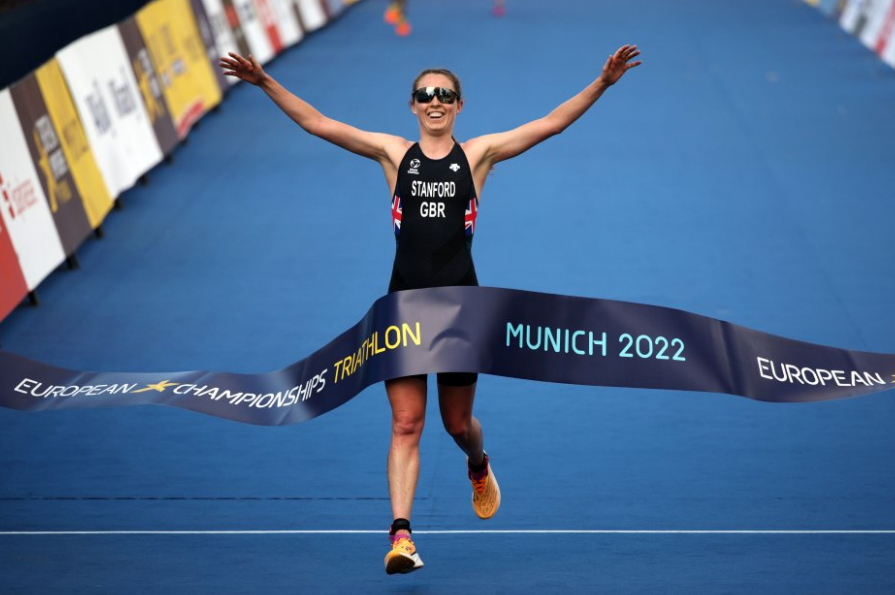 Nine years after winning the women's world triathlon title, Britain's 33-year-old Non Stanford stood on top of the podium again at the Munich 2022 European Championships after a hot and gruelling event in the Olympiapark.

The stands and approaches in the triathlon finish area were packed for the late afternoon race which involved a swim in the Olympiasee following a bike ride and run through the park built for the 1972 Olympic Games.

Stanford, who finished sixth in last week's Commonwealth women's triathlon in Birmingham and won silver with England in the mixed team event, made her decisive move with two laps of the concluding run remaining as she overtook the lead group of three containing home favourite Laura Lindemann, who tops this year's European list.

A former athlete who took part in Kelly Holmes's On Camp With Kelly training camp in South Africa shortly after the Athens 2004 Games where Holmes won women’s 800 and 1500m gold, Stanford extended her lead to finish in 1hr 52min 10sec.

Lindemann finished nine seconds behind for silver, with bronze going to France's Emma Lombardi at +12sec.

The German athlete had transitioned from bike to run in the lead with Julie Derron of Switzerland and Miriam Casillas Garcia of Spain.

Earlier Britain's Sophie Alden, who was leading after the swim, crashed shortly after transitioning to the bike and had to quit the race.