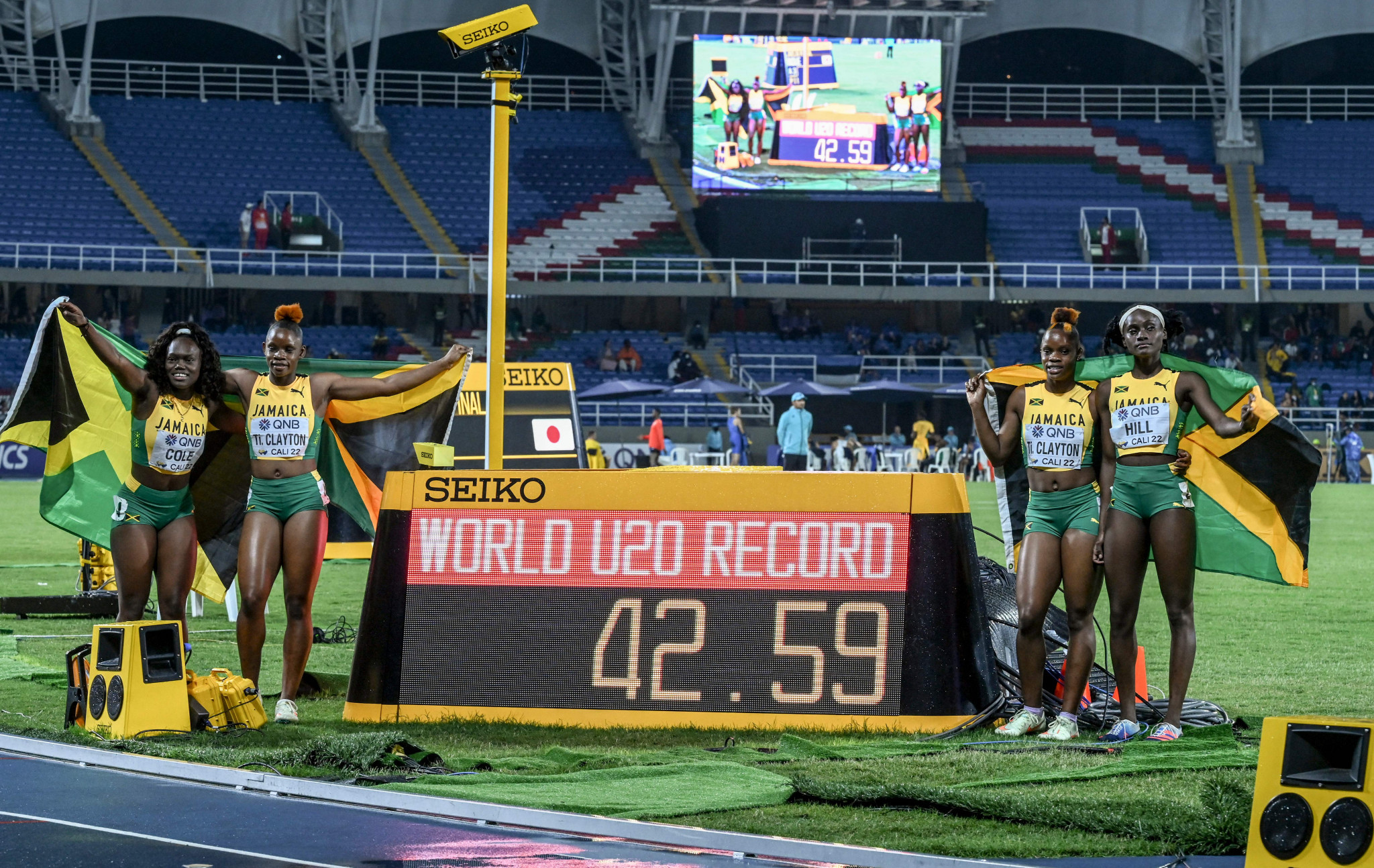 Jamaica's women shattered their own world under-20 4x100 metres record in taking gold on a stormy penultimate day at the World Athletics Under-20 Championships in Cali in a time of 42.59sec.

Inspired by Tina Clayton, who ran 10.95 to retain her individual title in midweek, the Jamaican quartet reduced the mark of 42.94 set at last year's World Championships in Nairobi.

Fittingly for athletes with such a rich sprinting heritage, lightning bolts filled the sky as they secured their victory, with Clayton running the second leg and her twin sister Tia bringing the baton home, just as they had in Nairobi.

Serena Cole and Kerrica Hill supplied the speed on the other legs as the United States team earned silver in a national under-20 record of 43.28, with bronze going to the home quartet in 44.59.

Ukraine’s 18-year-old Artur Felfner, who has spent the past few months based in Portugal and Finland due to the conflict in his home country, won men’s javelin gold with a best of 79.36 metres.

Felfner, who won silver in this event last year, set the leading world under-20 mark of 84.32m earlier this year.

"My goal was throwing over 80 metres," Felfner told the World Athletics website after his victory.

"Today wasn't the day, but I feel so proud because the gold medal was also my goal.

"Right now my country is in war, so I do believe this is kind of a happiness in the middle of everything.

"It's a good motivation."

Felfner will now turn his attention to the European Athletics Championships which start in Munich on August 15.

Jamaica's Jaydon Hibbert collapsed to the track with emotion, head in hands, as he waited to see how far he had jumped in the men’s triple jump final before confirming he had set a championship record of 17.27m.

That mark - a personal best by 0.61m - earned the 17-year-old, who took silver in this event last year in Nairobi, gold by more than a metre.

It put him second on the world under-18 all-time list and equal eighth on the all-time under-20 athlete rankings,

Only one other Jamaican - Olympic and world long jump silver medallist James Beckford - has ever gone further with his 17.92m national record set in 1995.

Hibbert’s fellow 17-year-old Selva P Thirumaran of India earned silver on the penultimate day of competition with a personal best of 16.15m.

The men’s high jump title went to Hibbert’s 18-year-old team-mate Brandon Pottinger, who won with a best of 2.14m.

Linares, 19, who set a South American under-20 record of 6.68m in July, earned silver with a best of 6.59m, with Italy’s Marta Amouhin Amani claiming bronze with a personal best of 6.52m.