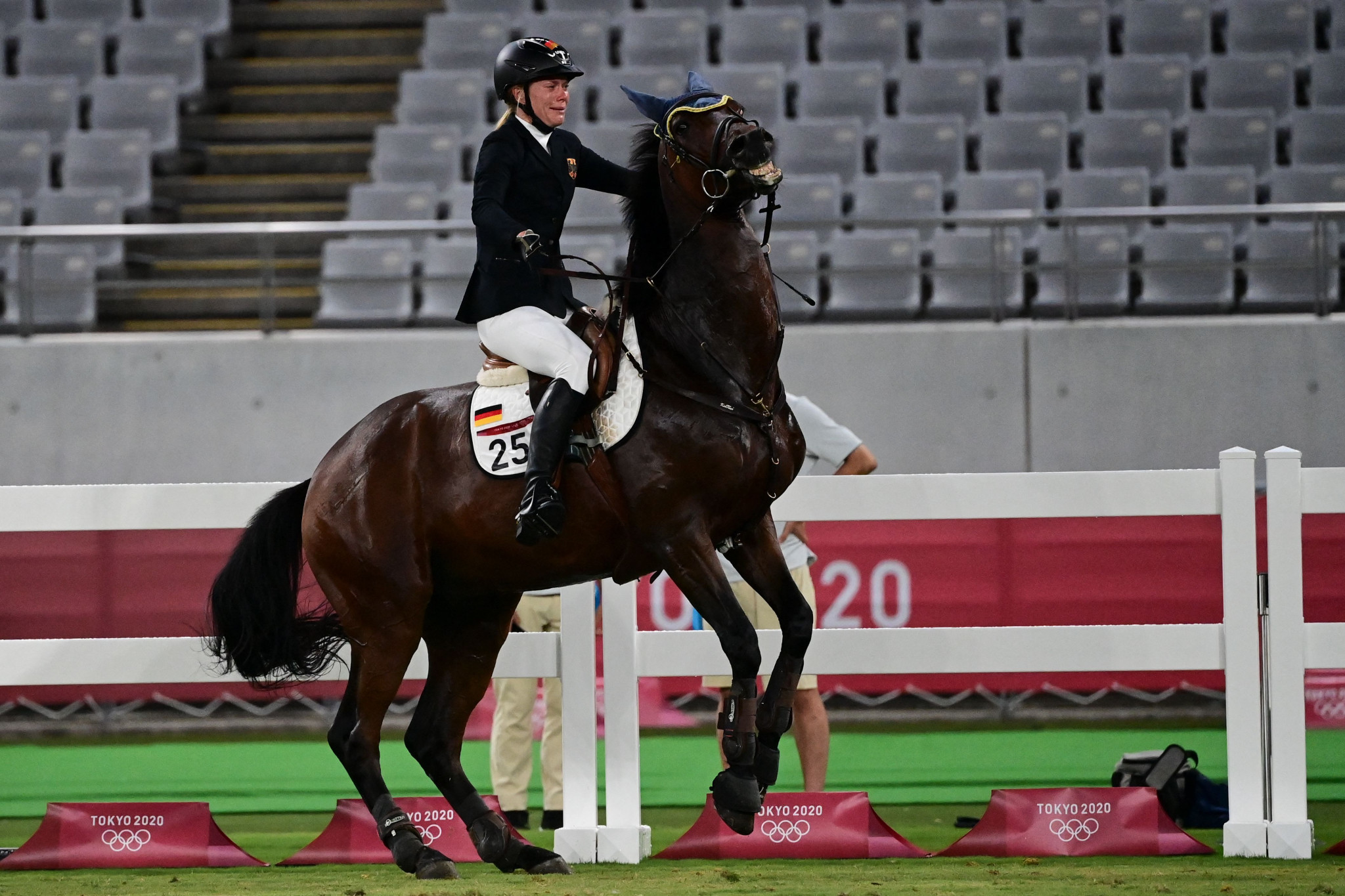 International Equestrian Federation (FEI) President Ingmar De Vos has warned that any inclusion of riding in modern pentathlon should be in accordance with its "standards and rules and regulations".

The International Modern Pentathlon Union (UIPM) has incurred the wrath of many athletes with its plans to shelve the equestrian element of the sport after the 2024 Olympics in Paris, with two variations of the obstacle discipline set for testing as a replacement later this month.

This followed the scandal in the women's competition at Tokyo 2020, which led to German trainer Kim Raisner being sent home in disgrace after being filmed hitting a distressed horse during the women's event.

The horse in question, Saint Boy, refused to jump for German pentathlete Annika Schleu - who had led before the jumping element.

The Pentathlon United pressure group has criticised the process which led to riding's removal, alleging a lack of transparency and asking for an International Olympic Committee (IOC) investigation into governance at the UIPM, which has been led by Klaus Schormann since 1993.

While De Vos said it was not the FEI's place to comment on the removal of riding from modern pentathlon, he promised that the world governing body for equestrian would provide support to the UIPM for Paris 2024.

"I think there a couple of things," De Vos told insidethegames.

"First of all what happened in Tokyo was completely unacceptable, and it clearly shows that the way modern pentathlon was doing the equestrian competition was absolutely not in line with our own standards and principles, and we have immediately addressed that.

"Modern pentathlon created a working group to improve these rules, and we have provided two experts, one in the field of jumping and one in veterinary to make sure that the competitions they will have in Paris, because jumping will be still be part of the programme in Paris, will be completely up to our standards of horse welfare.

"We are going to help them also, and of course we have in Paris a great advantage in that we share the same venue so we can have our horse welfare procedures in place, so we would like to help.

"With regard to the future of modern pentathlon, it's not up to me or up to the FEI to provide any comments, it's their choice not to have equestrian.

"The only thing what I can say is that if they want to continue with equestrian, they have to do it according to our standards and rules and regulations."

The Château de Versailles is set to stage equestrian and modern pentathlon competition at Paris 2024.

Equestrian's place at the Olympics came under scrutiny after Tokyo 2020, with the People for the Ethical Treatment of Animals (PETA) calling for all of its events to be removed from the Games.

PETA cited the case of Jet Set, a horse ridden by Swiss Robin Godel that had to be put down because of injuries sustained during the cross-country section of the Olympic eventing contest, and Kilkenny, ridden by Ireland's Cian O’Connor.

Kilkenny suffered a nosebleed in the individual jumping final, and was later withdrawn from the team final.

De Vos, who has been an IOC member since 2017, believes that equestrian's place on the Olympic programme is secure, and claimed that a new Commission tasked with establishing a framework to address concerns related to the use of horses can help to strengthen the FEI's welfare measures.

"Let me first say that of course there are animal welfare organisations that are very reactive, and that some of them even being what I call animalistic because they even do not want any relationship between the human and an animal, so I don't think that these are a threat for instance our sport in the Olympics," he said.

"I think that our organisation and our rules and regulations already cover the horse welfare issues, so I'm not afraid of that, but I think really that in a changing society, we need to proactively explain why we can practise our sport, why our sport is so important, not only for the human but also for the horse.

"So I think this is what we have to do for ourselves, instead of always reactively having to make statements every time there is an incident or a would-be incident, so we want to create this framework so that we can address it in a proactive way, and so that we can also have a broader discussion about what we need to review in our rules and regulations, what we need to improve, and also how can we better educate our community."

The Commission is chaired by external expert Professor Natalie Waran of New Zealand, and is scheduled to hold its first meetings this month.

A final report is due to be presented to next year's FEI General Assembly in Mexico.

Belgian official De Vos has served as FEI President since 2014.

He is set to be elected for a third and final four-year term as the only candidate for the role at the General Assembly in Cape Town in November.