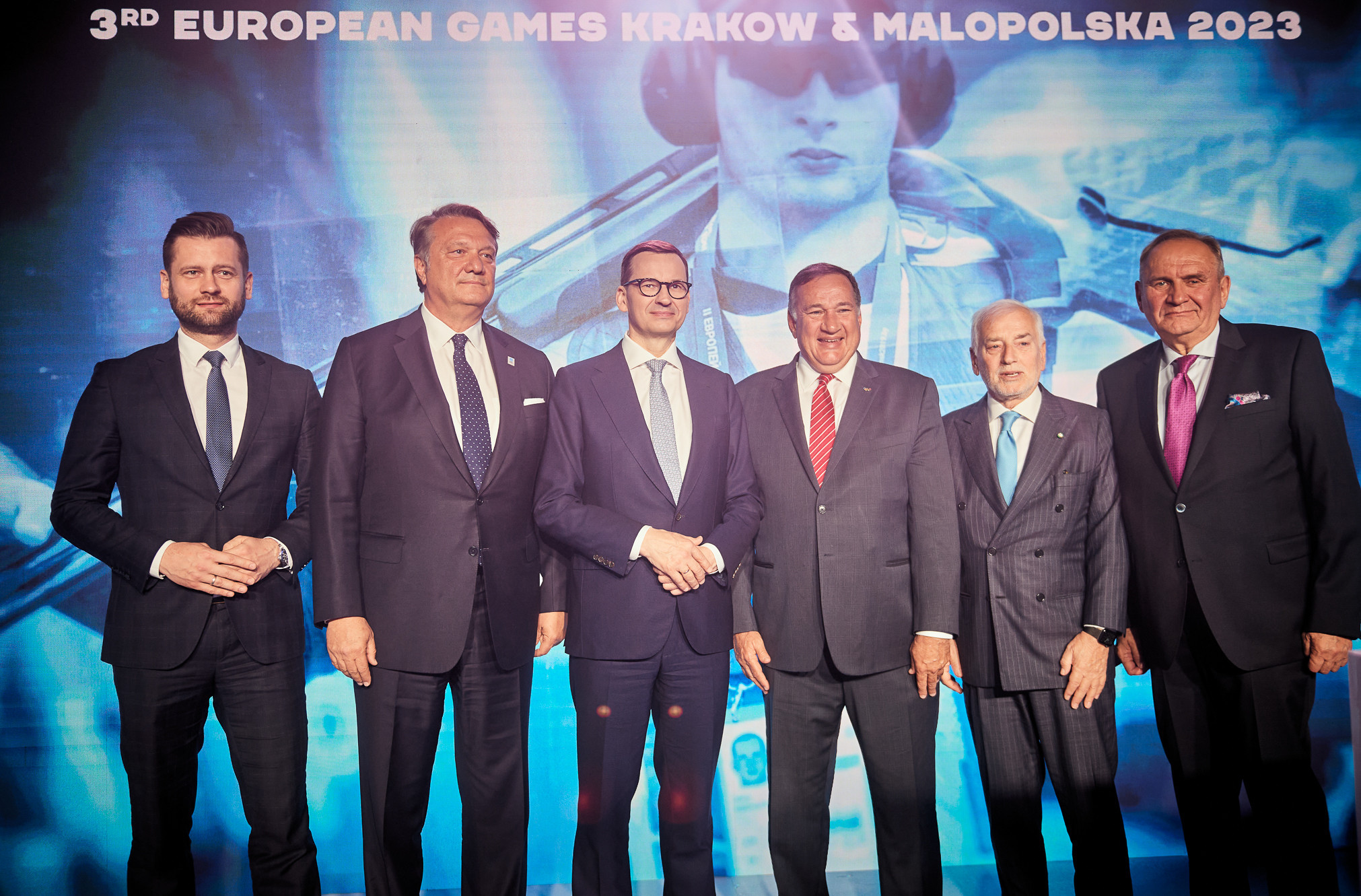 The long-awaited host city contract for the Kraków-Małopolska 2023 European Games has been signed today with a focus on setting a "sustainable blueprint for the future".

"We are thrilled to reach this important milestone and set the blueprint for the future of Europe’s premier multisport event," said Capralos.

"As with all major events there are challenges, but working with our partners in Poland makes this journey easier and all the more worthwhile.

"Poland is a natural fit to host this event due to the country’s incredible sporting history, but also because the people are an embodiment of the values the EOC and the European Games seek to promote."

The contract is binding and ensures that the Games will take place in Poland provided they go ahead.

Mayor of the City of Kraków Jacek Majchrowski, Marshal of the Małopolska Region Witold Kozłowski, POC President and Secretary General Andrzej Kraśnicki and Adam Krzesiński, and Marcin Nowak, chairman of the European Games 2023 Organising Committee were in the capital to meet the EOC delegation for the signing in what is hoped to be a low-cost and environmentally friendly event.

The Polish Government has committed more than PLN141 million (£25 million/$33 million/€30 million) which cover the renovation of the Henryk Reyman’s Municipal Stadium which is due to host the Opening Ceremony on June 21 next year, the construction of three or four 3x3 basketball courts at the KS Cracovia 100th Anniversary Hall Sports Centre for Disabled People, and the modernisation of canoe facilities at the Kolna Sports and Recreation Centre.

The Government has also invested PLN 350 million (£63 million/$82 million/€76 million) into infrastructure for the region in time for the Games.

The funding commitment was instrumental in getting the deal across the line, along with support from the European Union.

"Thanks to the multi-million Polish government support, important repairs and modernisation of roads, tracks, pavements, and the construction of bicycle paths will be carried out," said Majchrowski.

"Additionally, the condition of several sports facilities in the city will be improved.

"Thanks to these investments, the people of Kraków will be able to use modern and friendly infrastructure for the next decades."

There are 26 sports on the programme in Poland, including competitions in 18 Olympic sports which are due to serve as qualification events for the Paris 2024 Olympic Games.

The further eight Olympic sports are set to hold European Championships as part of the Games.

"As part of the development of the future roadmap of the EOC, we undertook a wide-ranging NOC consultation," said Pagnozzi.

"NOCs made it clear that an exciting, commercially appealing, and sustainable European Games was central to our future.

"To achieve this, the consensus was that the best Olympic athletes had to compete and the way to do this was by collaborating with International and European federations to make the events Olympic qualifiers.

"Combining this with up and coming sports, that will help us engage with new audiences, will make for a truly spectacular European Games."

The European Games are set to take place in Kraków and the regions of Małopolska and Śląsk in Poland from June 21 to 2 July 2023.

"The European Games 2023 will be an excellent showcase of the growth and opportunity in Poland, as well as the spirit and dynamism of the next generation, which will be brought to life by through our volunteer programme," said Kraśnicki.

"I want to thank the EOC and of course all our partners here in Poland, who have been key to our progress to date.

"Let’s continue our great collaboration in the months ahead and deliver an amazing event for Europe."

The event is hoped to leave a lasting legacy on sport in the host country, with volunteers, many of whom will be young people, pivotal to staging the Games.

"The legacy of the Games is the youth of Poland and Europe," said Arat.

"The future Polish and European citizens.

"Both Kraków and Małopolska have a great university culture.

"One of the oldest universities in Europe is in Krakow.

"The university students and volunteers will be the engine of our Games!"