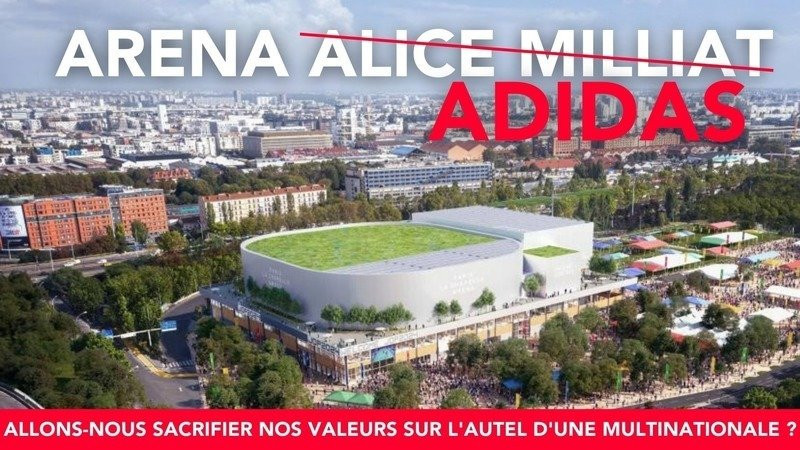 A petition has been launched in a bid to reverse a decision to accept a naming rights agreement with Adidas for a Paris 2024 Olympic venue, which had initially been expected to be named after women's sport activist Alice Milliat.

A decision on the naming of the future Porte de La Chapelle Arena was made by the SAE POPB Board on Thursday (May 12).

According to French newspaper Le Monde, approval was given to naming the venue "Adidas - La Chapelle District."

The SAE POPB, who operate the Accor Arena, won a tender process last February to be appointed to run the venue for a 10-year period.

The Paris Council had voted in favour of a proposal in 2020 to name the venue after Milliat.

Milliat's efforts in 1917 to have women's sport recognised at the Olympic Games, as well as her involvement in organising the Women's World Games in Paris in 1922 were highlighted.

Four editions of the Women's World Games were held from 1922 to 1934, with the events viewed as having opened up a wider range of women's competitions at the Olympic Games.

Nicolas Bonnet-Oulaldj, President of the communist and citizen group on the Paris Council, had led the campaign to have the venue named after Milliat.

He is one of the signatories of a petition established in response to the Adidas agreement.

"For lack of political will, there is still a long way to go for equality between women and men in our society, but also in sport," the petition reads.

"The Olympic Games that we will host in Paris in 2024 are a unique opportunity to highlight women in this very masculine environment.

"For this reason, as we have proposed several times to the Mayor of Paris, and as we voted unanimously in July 2020, we would like the Olympic equipment located at Porte de la Chapelle to be named Alice Milliat.

"Naming it this way would give a woman's name to Olympic venue for the first time.

"However, we learn that this equipment will also be a victim of the practice of 'naming'.

"Instead of bearing the name of Alice Milliat, it will eventually be named 'Adidas - La Chapelle District'.

"This reversal is not acceptable.

"Let us give meaning to these Olympic Games. Let's not let the multinationals monopolise the names of our sports equipment. As André Devron, who fought until his death for the recognition of this great woman, said: 'Alice Milliat amply deserves to be recognised as a figure of 20th century feminism'.

The Porte de La Chapelle Arena is scheduled to host Olympic and Paralympic badminton and taekwondo events at Paris 2024.

The facility will become the home of Paris Basketball, a French professional basketball club, after the Games.

The venue will have an 8,000 capacity with a basketball layout, rising to a maximum capacity of 9,000.

Construction company Bouygues was awarded the rights to design and build the venue, which is due for completion a year before the Games in 2024.