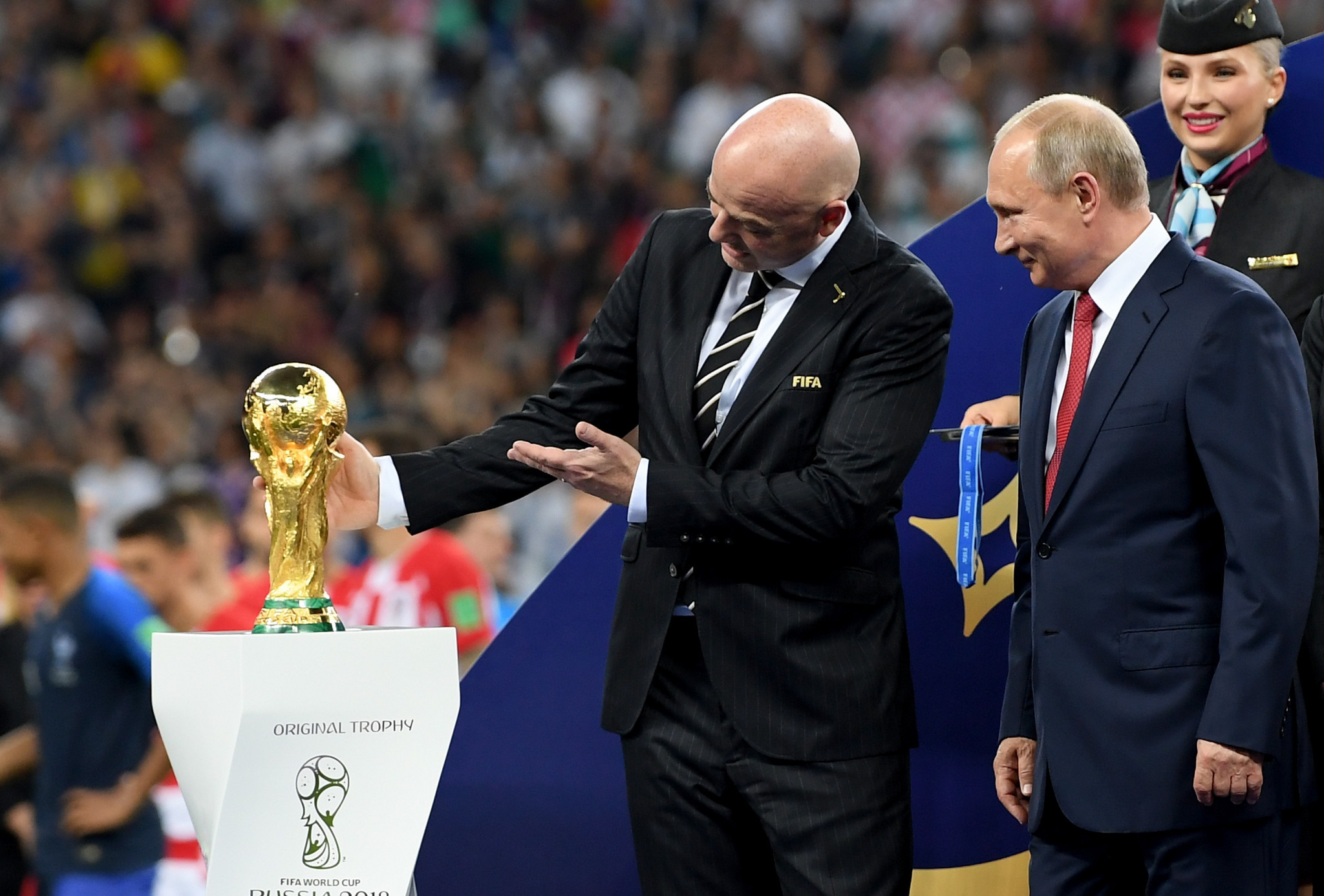 Gianni Infantino has admitted that the last edition of the men's World Cup in Russia "did not create a lasting peace", while the Russian Football Union (RFU) has defended its appearance at the 72nd FIFA Congress in Qatar's capital Doha.

Last month's invasion of Ukraine prompted widespread criticism and led to Russia largely being frozen out of international sporti.

The country was expelled from qualifying for this year's men's World Cup, although the RFU has not been suspended by FIFA.

Russia and Qatar were controversially awarded hosting rights to the 2018 and 2022 FIFA World Cups respectively under Infantino's predecessor Sepp Blatter.

Critics have cited the World Cup as an example of sportswashing on the part of the Russian Government, with Infantino among those who received an Order of Friendship medal from President Vladmir Putin in 2019.

Dozens of officials involved in the awarding of the 2018 and 2022 FIFA World Cups have since been banned for breaking ethics rules, and in several cases jailed for corruption.

After the 2018 tournament in Russia, the FIFA President called the tournament "the best World Cup ever", a tag he has also used to describe his expectations for Qatar 2022.

At the Doha Exhibition and Convention Centre today, Infantino insisted that that the 2018 World Cup was a "great success sportingly and culturally", but recognised that it did not prevent the attack on Ukraine.

Russia had already annexed Crimea four years prior to the World Cup.

"The Russia World Cup in 2018 four years ago was by all means a great World Cup, a great success sportingly and culturally," the Swiss-Italian official claimed.

"But obviously it did not solve the problems of the world.

"It did not even solve the problems in the region.

"It did not create a lasting peace."

Infantino called on political leaders to work towards peaceful solution across the globe.

"Once this terrible conflict is over and all other conflicts around the world as well, hopefully very soon, football can play a small part in rebuilding relationships, in establishing peace and understanding, and we will be there at the forefront of doing that," Infantino said.

"Please engage in dialogue even with your worst enemy.

The RFU attended the Congress in Doha, despite the ban on Russia's national team and clubs from FIFA and UEFA competitions.

It remains an active member of both governing bodies, which last week enabled it to launch a surprise bid to stage the men's European Championship in 2028 or 2032.

Former FIFA Council member Alexey Sorokin insisted that the RFU was merely exercising its right to attend the Congress.

"We are not hiding," he said, as reported by The Independent.

"We have every right to be here."

Three FIFA members were suspended at the Congress.

An overwhelming majority of delegates voted to ratify the suspensions of the Pakistan Football Federation, the Zimbabwe Football Association and the Football Kenya Federation.

A total of 195 votes were received in favour of Pakistan's suspension, 199 for Zimbabwe's and 198 for Kenya's, with only four, two and one votes against, respectively.

Infantino was asked whether FIFA had any plans to suspend the RFU at a press conference following the conclusion of the Congress, but argued that the gathering of FIFA's members offered a pivotal opportunity to "bring people together".

"The decision on Russia [to ban its national team from FIFA competitions] has been taken around a month ago I think," he commented.

"The Russian Football Union has appealed that decision at the CAS [Court of Arbitration for Sport] so we are awaiting of course the result of the CAS deliberations in this respect and then we will see what comes next.

"I sincerely hope that the conflict can end, and we will be there on the first day to play football again, because that's what I think is needed in these countries.

"Russia as a Football Union, like any other Federation, has not been suspended as such by FIFA, it has been participating in this Congress as well because if we don't have occasions to bring people together like a Congress, then we'd rather stop and go home."

The Congress featured a video address from Ukrainian Association of Football President Andriy Pavelko, who was wearing a bulletproof vest.

"During this period we have regularly receive sad news about the deaths of members of Ukrainian football community representatives," he said.

"They have been killed by the aggressors’ bullets and shells, one of the biggest armies in the world."

Explicitly thanks UEFA President Aleksandr Ceferin for his help

Pavelko added: "I express my deep gratitude to the football associations that help our country and support Ukrainians.

"I thank those who host our football representatives, especially the young players who had to leave their country to escape from the war.

"We are grateful to everyone who sent us humanitarian aid, or even just called and asked how we were doing.

"This is all very important to us right now.

"Huge gratitude from all of Ukraine."

Ukraine's World Cup qualifying playoff semi-final away to Scotland has been postponed until June due to the war in the country.

The winner will then travel to Wales to play for a place at Qatar 2022.