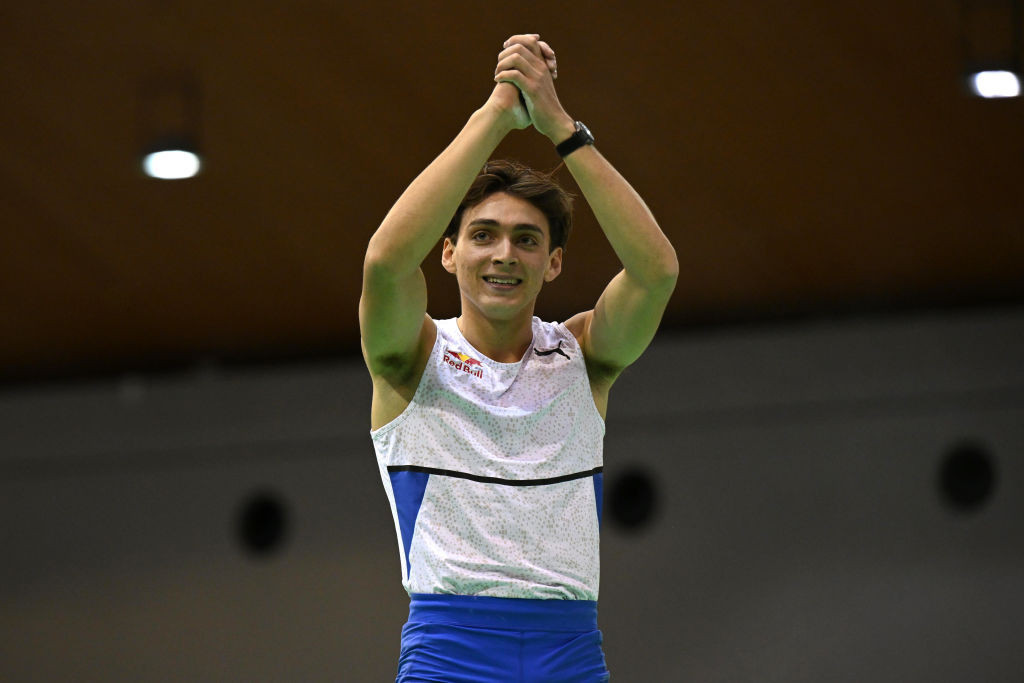 Olympic pole vault champion Mondo Duplantis started 2022 by winning with 6.02 metres in Karlsruhe at the first of this year’s World Athletics Indoor Tour Gold meetings - with world 100 metres champion Christian Coleman poised to return to action in the second tomorrow after his doping ban.

Coleman is due to race over 60 metres at the Millrose Games in New York, where he says he is determined to "have fun" after the 18-month suspension for breaching anti-doping whereabouts rules that forced him to miss last year's Olympics, where he would have been the favourite.

The 25-year-old sprinter will make his first major appearance since February 2020 as he competes against a field which includes fellow Americans Noah Lyles, the world 200m champion, and Trayvon Bromell, the 2016 world indoor champion.

Duplantis had targeted the Karlsruhe meeting record of 5.95 metres achieved behind closed doors last year by France's former world record-holder Renaud Lavillenie, commenting: "If nobody has jumped six metres in Karlsruhe, then I feel like it's about that time.”

The 22-year-old, who has recently switched his training base from the United States to Sweden, his mother’s place of birth, had laser eye surgery over the winter, no longer needs to use contact lenses and has reported an improvement in his vision.

He was certainly focused at the start of a season in which he will seek world indoor and outdoor titles, producing first-time clearances at 5.51, 5.71, 5.89 and 6.02m - a 2022 world lead - before having three unsuccessful cracks at 6.19m, a centimetre above the world record he set in 2020.

The main competition to Duplantis came from US vaulter KC Lightfoot, joint fourth in the Tokyo 2020 final, who cleared 5.89m at his third attempt.

Ethiopia's Berihu Aregawi lived up to his billing as favourite in the men's 3,000 metres following his 5 kilometres world record run on the roads of Barcelona on New Year’s Eve.

Aregawi, who won last year’s 5,000m at the Diamond League Final in Zurich and finished fourth in the 10,000m on his Olympic debut in Tokyo, broke away from the field shortly after 1,000m.

His winning time was the fifth-fastest in history - but not the track record, as he was 0.05sec adrift of the then world record set in this arena in 1998 by his famous fellow countryman, the multiple world and Olympic champion Haile Gebrselassie.

Multiple world medallist @PascalMartinot 🇫🇷 storms to 60m hurdles victory at @INDOOR_MEETING with a world leading time of 7.54 after running 7.56 in the heats!#WorldIndoorTour pic.twitter.com/D6CaJ8c2s6

France’s European champion Pascal Martinot-Lagarde equalled the world indoor season’s best of 7.56sec in reaching the men’s 60m hurdles final, which he won in a 2022 world lead of 7.54.

Britain’s world indoor champion Andy Pozzi, who had won the other heat in in 7.63, clattered the third hurdle and dropped to last place in 7.75.

British high jumper Emily Borthwick, who increased her personal best from 1.84 to 1.93 metres last year during a season which saw her make her Olympic debut, got 2022 off to a hugely encouraging start.

She equalled her indoor personal best to share victory with Germany’s Imke Onnen on 1.91m - the 2022 world-leading mark.

There were other 2022 world leads in the men’s triple jump, where Greece’s Andreas Pantazis won with 16.79m, and the women's 1500 metres, in which Ethiopia's Axumawit Embaye clocked 4:02.12.

Jamaica’s 2015 world 100m hurdles champion Danielle Williams won the 60m hurdles on a photo finish - by a margin of 0.001sec - as she and France’s rising talent Cyréna Samba-Mayela clocked personal bests of 7.84.

Britain’s Elliot Giles, who last year became the second-fastest man ever indoors over 800 metres, clocking 1min 43.63sec, ran a controlled race to win in 1:46.78, although he needed to lean to beat Sweden’s Andreas Kramer, who clocked 1:46.83.

Uganda’s Halimah Nakaayi, women’s world 800m champion, marked her first indoor appearance since setting a personal best of 2:01.96sec at Lievin in 2020 with victory in 2:02.81.

Duplantis’s Swedish compatriot Thobias Montler led through to the final round in the men’s long jump with an effort of 8.00 metres and extended that to a winning effort of 8.02m as one of the three leading jumpers enabled to make a sixth and final attempt.

The new ruling for this event means that the best effort in the whole competition wins, even if it is not achieved in the final round, but in this case the showcasing effect for the majority-masked crowd of around 1,000 in the Messehalle worked out.

The first of two women’s 400 metres finals was won in a 2022 world lead and personal best of 51.92sec by Poland’s Anna Kiełbasińska ahead of Ireland’s Phil Healy, who clocked 51.97.

Among those athletes due to feature at the Armory Track in Manhattan are Athing Mu, Ryan Crouser and Katie Nageotte, respective Olympic champions in the women’s 800m, men’s shot put and women’s pole vault.

But it is the men's 60m - with the return of Coleman - that will be studied most closely.

The third of the Gold meetings tour will take place across New York on Staten Island on February 6 in the form of the New Balance Indoor Grand Prix, before the caravan returns to Europe.