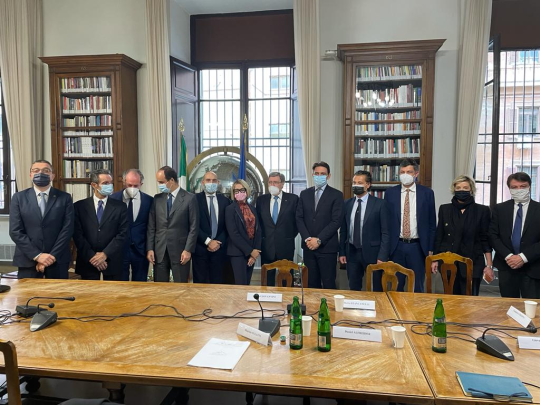 Infrastructure Milano Cortina 2020-2026 Spa, the company to oversee infrastructure for the Milan Cortina 2026 Winter Olympics, has been established following a meeting of ministers and stakeholders.

This was formalised at the Ministry of Sustainable Infrastructures and Mobility (MIT) in Rome and was attended by the Minister of the department, Enrico Giovannini.

Filippo Giansante, representing the Ministry of Economy and Finance, President of the Lombardy Region Attilio Fontana and President of the Veneto Region Luca Zaia were all present as stakeholders to sign the agreement.

"It is an important day," said Giovannini.

"The birth of the company will allow us to pass to the operational phase for the realisation of the works.

"But to make up for the delay accumulated in recent years, we will have to speed up numerous steps and a strong team spirit will have to prevail.

"The appointment of a commissioner will speed up the planning and construction process of the works financed up to now, but we have included additional resources in the budget bill to allow Italy to fully respect the commitments it has made towards the International Olympic Committee."

For the period from 2022 to 2025, there will be a €324 million (£272 million/$364 million) budget available to complete planned works and resolve any infrastructure issues.

The Milan Cortina 2026 Winter Olympics are scheduled to take place from February 6 to 22 2026, followed by the Paralympics from March 6 to 15.