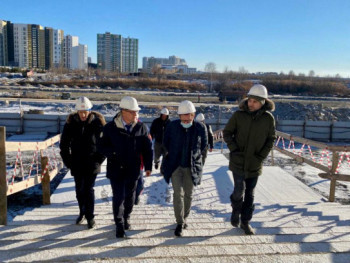 Leonid Rapoport, the Minister of Physical Culture and Sports, visited facilities in preparation for the Games.

Rapoport visited the construction site of the Judo Arena.

The venue is located in the Akademichesky Yekaterinburg and will seat 1,669 spectators when completed.

Organisers say the building will be divided into competitions, administration, training and general-purpose sections.

The building’s design has been influenced by a traditional Japanese Torii gate in recognition of the sport’s origins.

Sambo competition will also take place at the venue.

The venue is also being constructed for the Games and will form part of a complex, with buildings claimed to have been laid out in a pattern reminiscent of Roman legions in formation.

The centre will be located alongside other educational and sporting venues.

The Ural Football Academy was the final venue visited as part of Rapoport’s tour.

Archery and rugby sevens competitions will take place at the venue, as well as training.

Rapoport reportedly expressed confidence in preparations for the Games following the venue visits.

The Yekaterinburg 2023 Summer World University Games are scheduled to take place from August 8 to 19.

The Russian city will receive the FISU flag next year at the Closing Ceremony of the Chengdu 2021 Games.

The Games in the Chinese city were originally due to take place in August but were postponed until 2022 due to the COVID-19 pandemic.

Naples hosted the event back 2019.