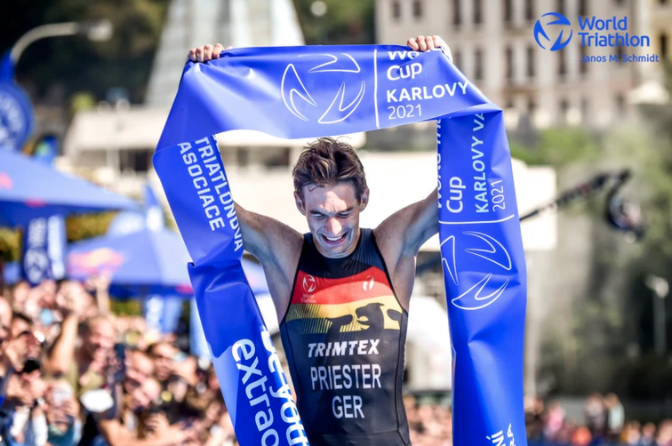 Germany's Lasse Nygaard-Priester and Julie Derron of Switzerland lit up the Karlovy Vary course in the Czech Republic to be crowned winners of the men's and women's World Triathlon Cup races.

A rapid first running lap from Nygaard-Priester set the tone for the rest of his race as he won his first World Cup medal.

The 750-metre swim was followed by a typically demanding and hilly bike segment which featured seven long climbs.

Márk Dévay of Hungary, Japan's Takumi Hojo, Italian Alessio Crociani and Portugal's Miguel Tiago Silva had led for the entire bike segment, but the efforts soon took their toll, and a 30-second lead proved insufficient as Nygaard-Priester, Briton Grant Sheldon and then Hungarian Csongor Lehmann, were able to jump into the medal places over the closing stages.

They finished in that order, with Nygaard-Priester 33sec ahead of Sheldon and Lehmann a further 7sec back.

The women's race unfurled in similar fashion as a four-person break emerged following the swim.

Britain's Sophie Alden led followed by a trio of Italians in the form of newcomer Bianca Seregni, Carlotta Missaglia and Luisa Iogna-Prat.

But Derron and fellow Swiss Alissa Konig closed while on their bikes and Konig took the lead early in the concluding run.

She could not hold on though - overtaken by Derron, Seregni and Ai Ueda.

Japan's Ueda produced a spirited run to chase down the frontrunners and eventually crossed the line in second place while Seregni claimed a remarkable bronze medal on her World Cup debut.

"It was tough," said Derron.

"I didn’t have the best first transition, so I had to make up a lot of time.

"We caught the first group by the end of the first lap of the city and then we had to push for another few laps to catch the first four and then I just tried to keep the pace high.

"I have been doing some longer distance racing so I just had to keep pushing and keep the pace high.

"It was a great crowd to race in front of."