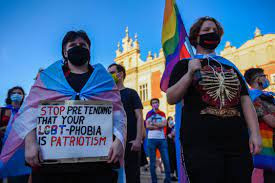 The Council in Malopolska, which includes Kraków, has voted to re-affirm its status as an “LGBT-free zone”, despite the European Union (EU) threatening to remove billions of euros in funding which could affect preparations for the 2023 European Games which it is due to stage.

Malopolska passed a resolution in 2019 which declared itself an "LGBT-free" region.

The European Commission warned the Council that unless it revoked the resolution by the middle of this September, it could withdraw more than €2.5 billion (£2.1 billion/$3 billion) it currently receives in funding from the EU.

The Regional Assembly has defied Brussels by voting down an opposition motion that would have expunged the 2019 anti-lesbian, gay, bisexual, transgender and intersex (LGBTI) resolution.

Jan Duda, the Leader of the Malopolska Council and father of Poland’s President Andrzej Duda, defended maintaining the 2019 resolution in the face of threats from the EU, but also insisted it had been misinterpreted.

"We need to meet and rewrite this declaration, as the one from 2019 has been misunderstood."

The Law and Justice Party (PiS) National Government has praised the defiance by Malopolska, with Cabinet Minister Michal Wojcik hailing the decision as a victory for "democracy and self-governance".

Poland’s most high-profile gay politician Robert Biedron, who co-leads the largest left-wing party in the country and is a member of the European Parliament, is among those to have condemned Malopolska’s refusal to withdraw the resolution.

"Once again, the hatred and anger of PiS turned out to be more important than the good of citizens, and they will suffer the most from this decision," he said.

Last October, the European Olympic Committees claimed the rights of participants at the 2023 European Games will be respected and it will endure there is "no discrimination of any kind",