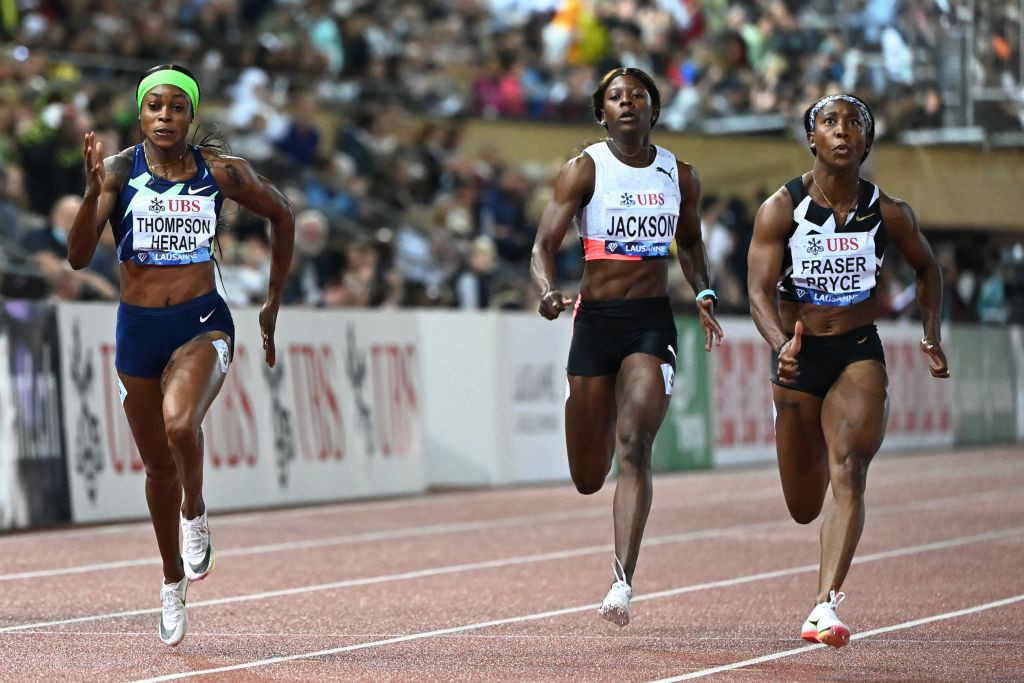 Double Olympic 100 metres champion Elaine Thompson-Herah, whose winning time of 10.54sec in Eugene last Saturday (August 21) was the second-fastest time ever, will seek to maintain her breath-taking form here tomorrow as the Diamond League moves on to the French capital.

Thompson-Herah did not exactly hang about in yesterday’s Diamond League meeting in Lausanne, clocking 10.64 - but that turned out to be the fastest losing time in history as Jamaica’s 34-year-old Shelly-Ann Fraser-Pryce, also a two-time Olympic 100m champion, won in 10.60, the third-fastest time ever.

The planned action replay at the Stade Charlety will not come to pass, however, as Fraser-Pryce announced earlier today that she was pulling out due to fatigue after getting back late to her hotel last night.

Thompson-Herah will still need to be in her sharpest form to withstand the challenge of a field that will include Britain’s world 200m champion Dina Asher-Smith, who was unable to run that event in Tokyo following a severe hamstring injury earlier this season but did come away with a bronze medal as part of the British 4x100m relay team.

And Jamaica’s 400m specialist Shericka Jackson, third in Tokyo, Eugene and Lausanne behind her two compatriots, has also moved on to this part of the concluding European leg of the Diamond League season.

Meanwhile Sweden’s Olympic pole vault champion Armand Duplantis, who suffered a rare defeat in the blustery conditions at yesterday evening’s meeting in Lausanne, will hope to get back to winning ways.

The 20-year-old world record-holder, who could only finish fourth with a best of 5.62 metres at the Stade de la Pontaise, will once again face the winner, his old US college rival Chris Nilsen.

The Tokyo 2020 silver medallist secured top billing in Switzerland on countback from his American compatriot, double world champion Sam Kendricks, after both had cleared 5.82m.

The ever-amiable but ever-competitive Kendricks still has things to prove this season after being kept from the Olympics by an untimely positive COVID-19 test.

Like Duplantis, Jamaica’s Olympic 110 metres hurdles champion Hansle Parchment has arrived in Paris with some immediate repair work to be done.

The 31-year-old, who beat the favourite for the title in Tokyo, the United States’ world champion and world indoor record-holder Grant Holloway,  finished last in Lausanne in 13.58sec as victory went to Devon Allen of the US in 13.05.

The latter American will be present again, as will home athlete and European champion Pascal Martinot-Lagarde, third in Switzerland, and France's Tokyo 2020 finalist Aurel Manga.

In the men’s 200m the two Americans who finished first and second in Lausanne in the hugely impressive times of 19.65 and 19.77, respectively the Tokyo silver medallist Kenny Bednarek and Olympic 100m silver medallist Fred Kerley, will do battle again.

They will be joined by Josephus Lyles, younger brother of world champion and Olympic bronze medallist Noah, who will be seeking to improve on the best of 20.03 he set in Eugene.

Having cheered himself up after a miserable Tokyo performance by winning the javelin competition in Lausanne with 88.54 metres, Germany’s 2017 world champion Johannes Vetter has an opportunity to put his failure even to reach the Tokyo 2020 final further behind him.

He may now be in the mood to get closer to the 97.76m effort of last year that put him second in the all-time list.

Vetter’s rivals will include the Czech Republic’s Olympic silver medallist Jakub Vadlejch, who was second in Lausanne with 85.73m.

Canada’s Marco Arop, who beat Kenya’s men’s Olympic 800 metres gold and silver medallists Emmanuel Korir and Ferguson Rotich to win in Lausanne, will only have the latter to deal with in Paris, although the Tokyo 2020 bronze medallist Patryk Dobek of Poland and fourth-placer Peter Bol of Australia will also be in contention again.

In the women’s high jump, Olympic champion Mariya Lasitskene, competing as an Authorised Neutral Athlete, will seek to maintain her winning momentum having earned victory on countback in Lausanne with a clearance of 1.98 metres.

Morocco’s Soufiane El Bakkali, who in Tokyo became the first non-Kenyan to win the men’s Olympic 3,000 metres steeplechase title since Poland's Bronisław Malinowski at the 1980 Moscow Games - which Kenya boycotted - will be favourite to record another victory in Paris.

But El Bakkali will have serious Kenyan opposition in the form of the Olympic bronze medallist and the returning Rio 2016 Games gold medallist and double world champion Conseslus Kipruto, who dropped out of the Kenyan Olympic trials after two laps following a troubled build-up to the event.

The women’s 3,000m event will feature Britain’s Olympic 1500m silver medallist Laura Muir, who will be seeking to reduce her 2017 personal best of 8min 30.64sec.

She will need to do so if she is to hold off the challenge of an highly talented field that includes the Rio 2016 800 metres silver medallist from Burundi, Francine Niyonsaba, who is precluded from running her specialist event under World Athletics rules over high, naturally-occurring testosterone levels in women athletes.

Niyonsaba was celebrating reaching the Olympic 5,000m final earlier this month only to learn that she had been disqualified from her semi-final for a lane infringement.

She laid down a big marker in response at last Saturday’s Prefontaine Classic in Eugene as she won a two-mile race that was not on the Diamond League programme in a national record of 9:00.75, finishing ahead of Ethiopia’s world 5,000m and 10,000m record holder and Olympic 10,000m silver medallist Letesenbet Gidey and Kenya’s double world 5,000m champion Hellen Obiri.

Niyonsaba has yet to record an official 3,000m time - and her first mark could prove spectacular.

Burkina Faso’s Olympic triple jump bronze medallist Hugues Fabrice Zango, based in France and coached by the host nation’s 2013 world champion Teddy Tamgho, is favourite in an event that includes the Tokyo 2020 surprise package, Yasser Triki, who finished fifth in an Algerian record of 17.43 metres.

Marileidy Paulino of the Dominican Republic, who won in Lausanne in 50.40sec, and Allyson Felix of the United States will be the favourites in an intriguing women’s 400m race.

Also involved will be the 21-year-old Dutch Olympic 400m hurdles bronze medallist Femke Bol, switching back to the flat event at which she won the European indoor title earlier this year having set a Lausanne meeting record of 53.05sec in her specialist event.