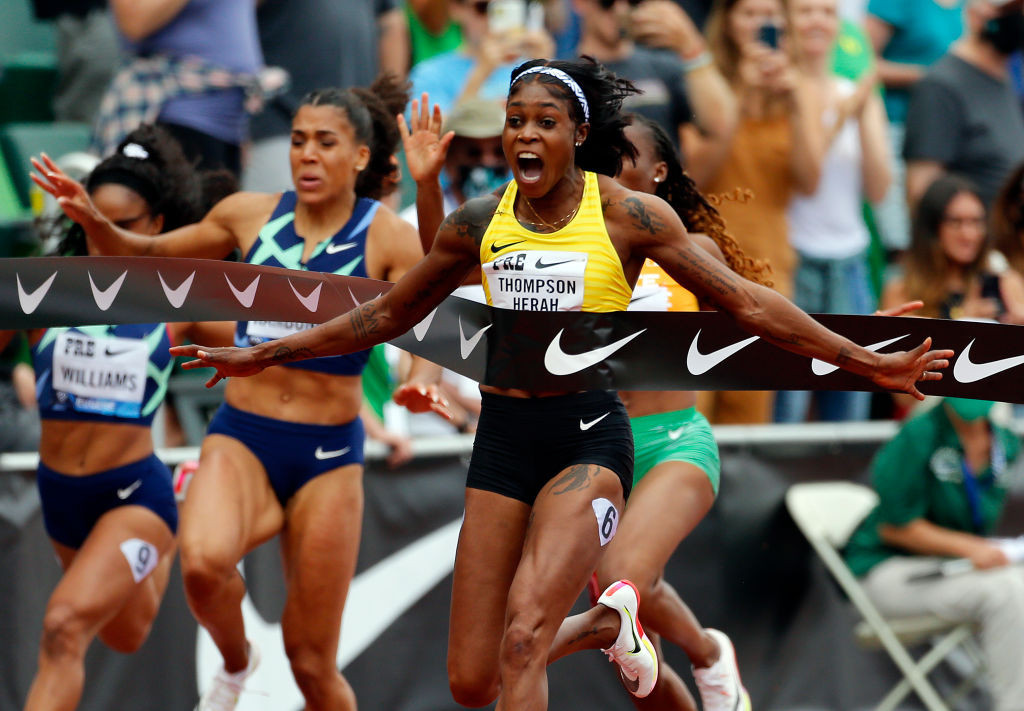 Double Olympic 100 metres champion Elaine Thompson-Herah ran a Jamaican and Diamond League record of 10.54sec in Eugene to defeat a field including the two compatriots who joined her on the Tokyo 2020 podium and home sprinter Sha'Carri Richardson.

Thompson-Herah, whose previous best was the 10.61 she set in retaining her 100m title in Tokyo, overhauled the fast-starting Olympic silver medallist Shelly-Ann Fraser-Pryce to bolster the position she already held as the second-fastest woman ever behind the controversial 1988 10.49 world record belonging to the late Florence Griffith-Joyner of the United States.

The 34-year-old Fraser-Pryce, the Beijing 2008 and London 2012 gold medallist who has run 10.63 this season, was second in 10.73, with fellow Jamaican Shericka Jackson completing the order of the Tokyo Olympic podium as she clocked 10.76, equalling her personal best.

Meanwhile home sprinter Richardson, who missed the Olympics after incurring a one-month ban following a positive test for cannabis during the US trials, got a sharp reality check as she rejoined the company of the world’s best, drifting back to ninth and last place in 11.14 on the Hayward Field track where she ran a wind-assisted 10.64 at the trials.

"To come back with a personal best after the Olympics, that is amazing," said Thompson-Herah, whose face had lit up when she saw her time.

"I think the records are in reach, because I ran 10.5 and I have so much more in me.

"I don't want to get carried away - the celebrations will start in October and November, but for now I have a mission to complete!"

Richardson had sounded beforehand as if she was ready to get back to the job and had insisted she was "not starstruck" by the Olympic achievements of the Jamaican trio, but her performance was strangely flat.

The 21-year-old from Dallas, Texas was in defiant mood afterwards, however: "I wanted to be able to come and perform after having a month off and dealing with all I was dealing with," a defiant Richardson said.

"I’m not upset with myself at all.

"This is one race.

"You know what I am capable of.

"Count me out if you want to.

"Talk all the shit you want, because I am here to stay.

"I am the sixth-fastest woman in this game, ever.

"And nobody can ever take that away from me.

"Congratulations to the winners, but they are not done seeing me yet.

Given her earlier performance it was no great surprise that Richardson did not take up her option of competing in the women’s 200m, which was won in 22.06 by Switzerland’s Mujinga Kambundji from home runner Gabrielle Thomas, the Olympic bronze medallist, who clocked 22.11.

Britain’s world champion Dina Asher-Smith, who skipped the 200m in Tokyo as a precaution after a severe hamstring injury, showed encouraging signs of recovery as she rounded the bend in the lead but was unable to hang on, finishing third - but in good order - in 22.19.

Norway’s 20-year-old Olympic 1500m champion Jakob Ingebrigtsen kept his usual cool as he won the concluding Bowerman Mile in 3min 47.24sec to become the second athlete of the day to set a national and Diamond League record.

Ingebrigtsen latched onto the natural front-runner, Australian Stewart McSweyn, and they reached the bell 40 metres clear of a field that included Kenya’s world champion and Olympic silver medallist Timothy Cheruiyot before the Norwegian made his inevitable move.

McSweyn was rewarded with a time of 3:48.40, with Cheruiyot, who spoke before this race of his struggles with lower back and hamstring injuries in recent weeks, finishing a distant third in 3:51.17.

World number one Norah Jeruto, who missed the Olympics as she seeks a transfer of allegiance from her native Kenya to Kazakhstan, showed what the Games had missed as she destroyed a field that included the Tokyo 2020 gold medallist Peruth Chemutai of Uganda to win the women's 3,000m steeplechase in 8:53.65 - putting her third on the all-time list.

In second place home hurdler Courtney Frerichs, whose bold front-running earned her silver behind Chemutai in Tokyo, reaped further reward for endeavour as she went under nine minutes for the first time, clocking an Americas record of 8:57.77.

All three individual home Olympic champions on show lived up to expectations in front of a respectable and enthusiastic home crowd as the annual Prefontaine Classic meeting returned to its traditional home for the first time in three years following the rebuilding work ahead of next year's World Athletics Championships.

Ryan Crouser, who set a world record of 23.37 metres at the US trials in this arena before retaining his shot put title in Tokyo with an Olympic record of 23.30m, earned his 21st successive win with another dominant performance and a best of 23.15m.

Athing Mu finished 20 metres clear of a top-class women’s 800m field as she won in a personal best of 1min 55.04sec, the eighth-fastest of all time.

The 19-year-old looked as if she would be running even faster in a race that was not part of the Diamond League event before tying up slightly over the final 30m.

She was followed home by fellow American Kate Grace in 1:57.60 and Jamaica’s Natoya Goule in 1:57.71, with Britain’s 19-year-old Olympic silver medallist Keely Hodgkinson fifth in 1:58.30.

Home Olympic pole vault champion Katie Nageotte only cleared at her third and final attempt at 4.62 metres but went on to earn victory with a third-attempt clearance of 4.82m, with with Britain’s Olympic bronze medallist Holly Bradshaw finishing second.

In the men’s 200m the home 2019 world champion Noah Lyles, who put a brave face on taking bronze in Tokyo behind winner Andre De Grasse of Canada and fellow American Kenny Bednarek, left the latter in second place as he won in 19.52sec., with wind at 1.5 metres per second, inside the limit of 2mps for record purposes.

That was the fastest time run this season, and the ninth-fastest of all time behind his own 19.50 set two years ago.

"I don't think you understand how lifeless it was in Tokyo to have no crowd there," said Lyles.

"It was dead silent.

"To come here and see a whole lot of people who love track, it was just amazing to see."

De Grasse won the later 100m race in 9.74 from home runner Fred Kerley, the Olympic silver medallist, with the former 400m man clocking 9.78, albeit with a following wind of 2.9mps.

Uganda’s Olympic 5,000m champion Joshua Cheptegei earned revenge of a kind over the 21-year-old Ethiopian who beat him to the Olympic 10,000m title, 21-year-old Selemon Barega, as he won a talent-packed, tactical men’s two miles in 8min 9.55sec.

The Dutch athlete finished in 14:27.89 after fading over the final third of the race.