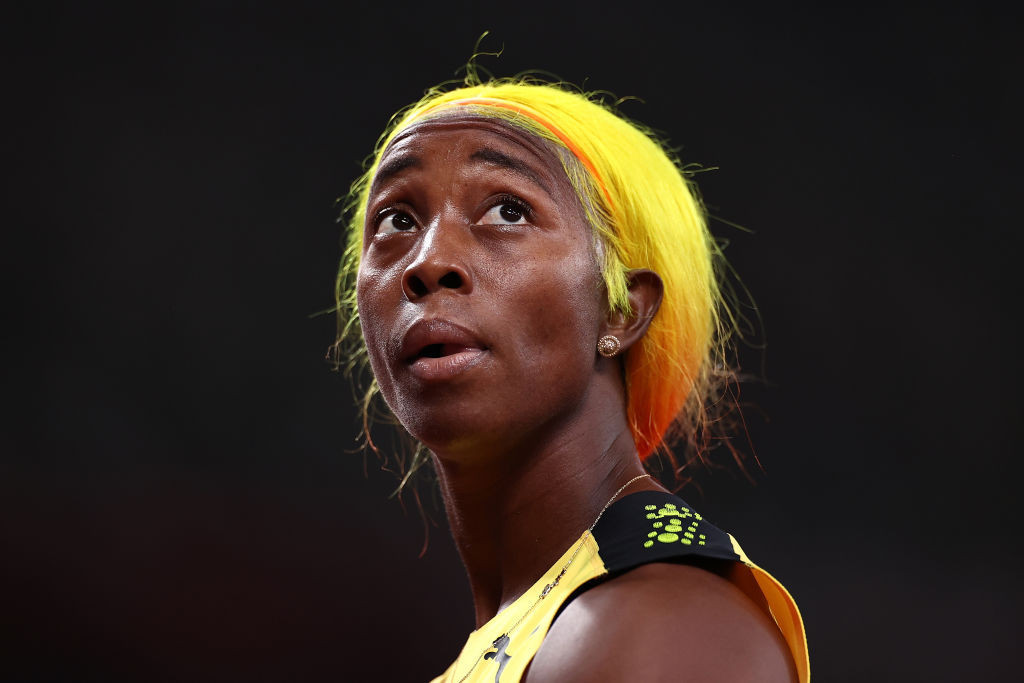 Not that the double Olympic 100 and 200m champion Thompson-Herah ran badly in front of an enthusiastic crowd - she clocked 10.64sec, only a tenth off her winning effort in Eugene, Oregon last Saturday (August 21), which was the second fastest ever run behind the 1988 world record of 10.49 by the late Florence Griffith-Joyner of the United States.

But on this occasion her perennial 34-year-old rival Shelly-Ann Fraser-Pryce, the Beijing 2008 and London 2012 champion, ran even better with a wind of 1.7 metres per second - inside the legal limit for records - at her back, clocking a superb personal best and meeting record of 10.60, the third fastest time in history.

"Believe it or not, I still haven't run my best race," said Fraser-Pryce.

"There will be more from me this season, and certainly my goal is to break into the 10.50 range."

That reversed the order of the Olympic 100m final, but the Tokyo bronze medallist, fellow Jamaican Shericka Jackson, was once again in third place, clocking 10.92, and Marie-Josee Ta Lou of the Ivory Coast, as so often in her career, was fourth in 10.94.

Parchment finished eighth and last in 13.58sec as victory in the men's 110m hurdles went to Devon Allen of the United States in 13.07, from home runner Jason Joseph in 13.11, with France’s European champion Pascal Martinot-Lagarde third in 13.17 and Tokyo bronze medallist Ronald Levy fifth in 13.40.

Duplantis could do no better than 5.62 metres in a pole vault competition won by the American who finished second to him in Tokyo, Chris Nilsen, who cleared 5.82 and earned victory on countback over compatriot Sam Kendricks, the double world champion whose Olympic ambitions were ended by a positive COVID-19 test.

There was a surprise too in the men’s 800m where the Tokyo gold and silver medallists, Kenya’s Emmanuel Korir and Ferguson Rotich, finished respectively second and third behind Canada’s Marco Arop, who won in 1min 44.50sec.

But for other Tokyo 2020 champions there was no wavering from the familiar route to victory.

Yulimar Rojas of Venezuela produced the field event performance of the night in the women’s triple jump, winning in a Diamond League record of 15.56 metres that surpassed, for the second time, the 1995 world record of 15.50m set by Ukraine’s Inessa Kravets and was only 11 centimetres short of her world record.

The exuberant Rojas produced four 15m-plus jumps on the night.

Ingebrigtsen clocked 7:33.06 despite the buffeting conditions to finish ahead of Ethiopia’s Berihu Aregawi, who clocked a personal best of 7:33.39, with Australia’s Tokyo 2020 finalist Stewart McSweyn third in 7:35.06.

The women’s 100 metres runners weren’t the only sprinters to enjoy themselves as Kenny Bednarek of the United States, the Tokyo 2020 200m silver medallist, won in 19.65sec ahead of compatriot Fred Kerley, the Olympic 100m silver medallist, who clocked 19.77, with Olympic 400m champion Steven Gardiner of The Bahamas third in 20.11.

Meanwhile Norway’s Olympic 400m hurdles champion and world record holder, Karsten Warholm, offered brief evidence that he is human as he finished fourth in the men’s 400m flat - a non-scoring event for the Diamond League - clocking 45.51 in a race won by Wilbert London of the United States in 45.17.

Olympic bronze medallist Femke Bol of The Netherlands set a meeting record of 53.05 in the women’s 400m hurdles, where 31-year-old home runner Lea Sprunger, the European champion, ran her farewell race, finishing fifth in 54.75, just one place behind the world champion and Olympic silver medallist from the United States, Dalilah Muhammad, who clocked 54.50.

In the women’s long jump Sweden’s Khaddi Sagnia produced the best jump, equalling her personal best of 6.92m, but had to settle for second place as she only managed 6.64m in the final round, with Serbia’s Ivana Spanovic taking the win with her last effort of 6.73m.

Olympic women’s high jump champion Mariya Lasitskene, competing as an Authorised Neutral Athlete, won on countback from the young Ukraine jumper she beat to the 2019 world title, Yaroslava Mahuchikh, after both cleared 1.98 metres.

Marileidy Paulino of the Dominican Republic won the women’s 400 metres in 50.40sec.

In the men’s javelin Germany’s 2017 world champion Johannes Vetter, second on the all-time list behind world record holder Jan Zelezny of the Czech Republic, went some way to putting his miserable Olympic experience behind him as he won with 88.54 metres.