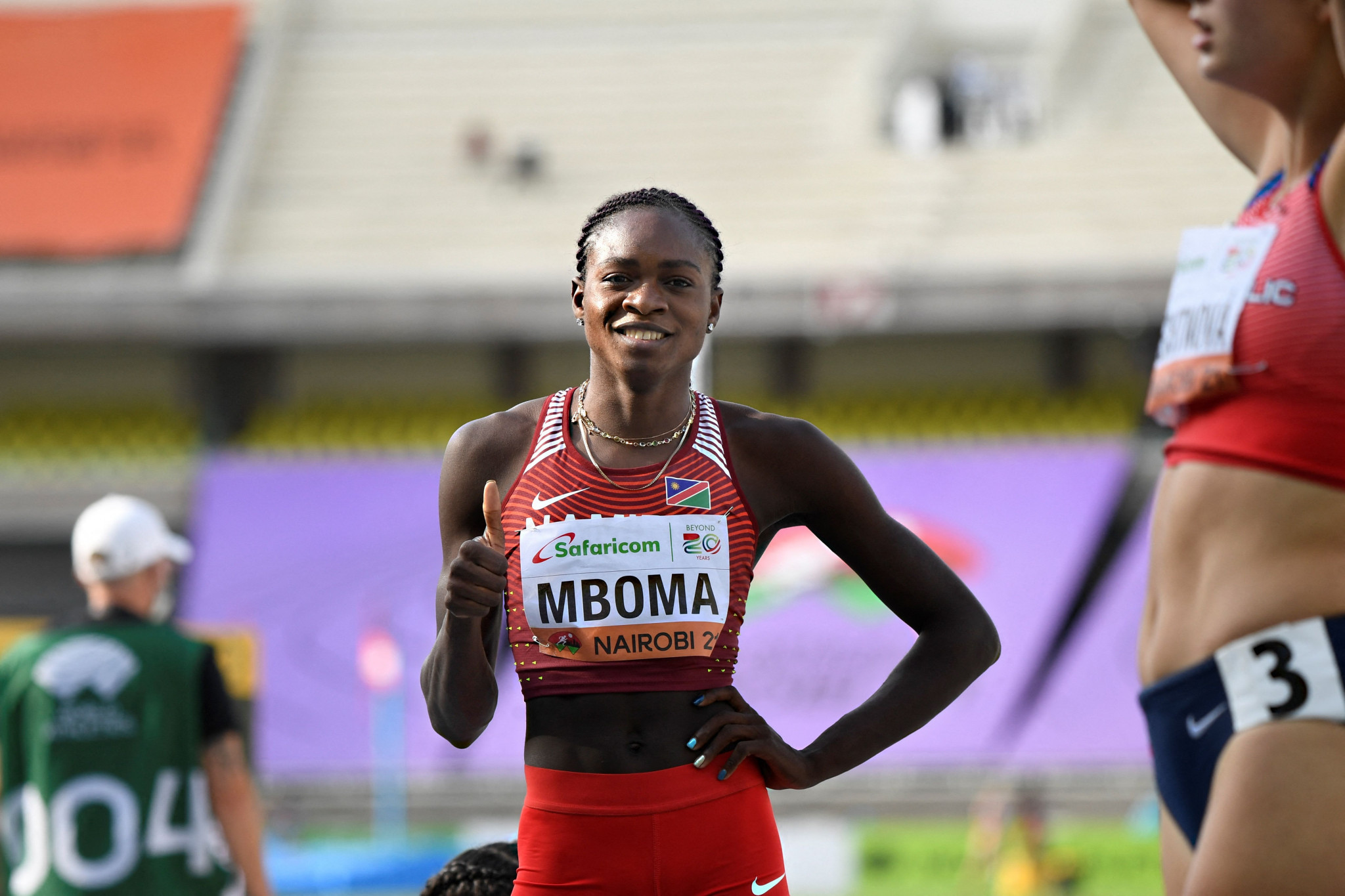 Christine Mboma of Namibia flew clear of compatriot Beatrice Masilingi on the home straight to take gold and set a women's 200 metres championship record at the World Athletics Under-20 Championships.

The Tokyo 2020 silver medallist, who is having to adapt to the shorter sprint after being banned from competing over her favoured 400m due to World Athletics' testosterone rules, ran 21.84sec in Kenya's capital Nairobi.

That is just 0.03sec shy of her own under-20 world record, set at the Olympics earlier this month.

Masilingi ran a personal best of 22.23 to finish with silver, having also won silver in the 100m earlier in the World Championships.

Favour Ofili of Nigeria was third.

In the men's 200m, Udodi Chudi Onwuzurike of Nigeria won gold in an under-20 national record of 20.38, with 100m champion Letsile Tebogo of Botswana winning silver.

South African Sinesipho Dambile rounded out another all-African podium in 20.48.

Other sprint finals in the evening included the 100m and 110m hurdle events.

Ackera Nugent of Jamaica won gold in the women's 100m event, leading the field by half a second.

Anna Maria Millend of Estonia and Anna Tóth of Hungary completed the podium places in that order.

In the men's event, France's Sasha Zhoya smashed his own under-20 world record, which he set in the semi-finals yesterday.

His 12.72 time was more than 0.20sec faster than his previous effort and more than half a second clear of silver medallist Vashaun Vascianna of Jamaica, with Jakub Szymański of Poland in bronze-medal position.

In the women's 400m, Imaobong Nse Uko of Nigeria ran a personal best of 51.55 to win gold, while Anthony Pesela continued Botswana's impressive meeting, setting a championship record of 44.58 on his way to men's gold.

Ethiopia's Ayal Dagnachew won the women's 800m, while Vincent Kibet Keter of Kenya kept two Ethiopians in second and third in the men's 1500m to ensure it was not a dominant middle-distance evening for Kenya's great rivals.

Mine De Klerk of South Africa won gold in the women's shot put with a longest throw of 17.4m, having aldo medalled in the discuss.

František Doubek of the Czech Republic won decathlon gold on 8,169 points, despite a valiant effort from Belgium's Jente Hauttekeete in the 1500m to close out day two of the event.

Mexico now has five under-20 race walk champions, with seven of its nine medals in the World Championships coming in the 10km race walk event.

"There is a lot of tradition in race walking in Mexico and I am very happy to continue with this," said Rodriguez.

"I have been working really hard.

"There are days where you don’t feel like training but all these efforts have now been worth it.

"My next big event will be the Pan American U20 Games at the end of November and after that, I will start getting ready for next season with the 2022 World Race Walking Team Championships."

In the men's race walk, Kenya's Heristone Wanyonyi won the country's first race walk medal at the Under-20 World Championships.

Wanyonyi, who is inspired by Dominic Ndigiti who won bronze for Kenya during the Under-18 World Championships in 2017, powered away from India's Amit in the final 600 metres to secure gold in a personal-best time of 42:10.84.

Jamaica were close behind in second with 39.00, while Nigeria clocked an African under-20 record in third of 39.33, which was then matched by South Africa.