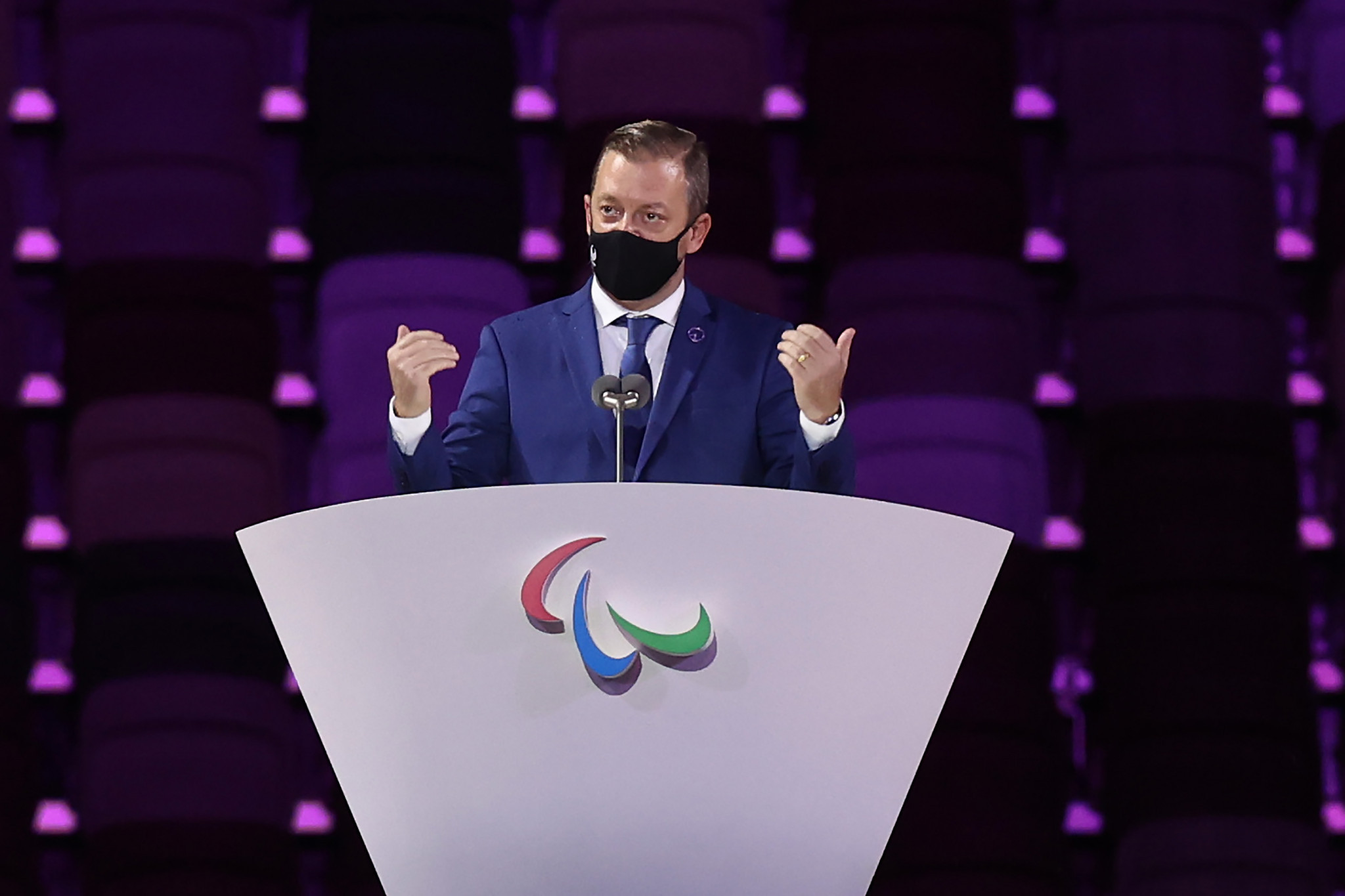 International Paralympic Committee (IPC) President Andrew Parsons called for a more inclusive society outside of the Paralympic Games period in his speech at the Tokyo 2020 Opening Ceremony.

Following similar calls from Tokyo 2020 President Seiko Hashimoto for the Games to create a world "free from discrimination or barriers of any kind", Parsons used his speech to encourage action in the rest of the traditional four-year Paralympic cycle.

"The Paralympic Games are for sure a platform for change," Parsons said.

"But only every four years is not enough.

"It is up to each and every one of us to play our part, every day, to make for a more inclusive society in our countries, in our cities, in our communities."

Parsons thanked the Japanese Government, the Tokyo Metropolitan Government, Tokyo 2020 Organising Committee and the International Olympic Committee for cooperating with the IPC to ensure the Games took place.

He also welcomed the host nation's "omotenashi", which is Japanese for "hospitality, treatment, reception and service".

"We thank our hosts for trusting we can deliver safe Games for the athletes and officials, but also for Japanese society," said the President.

"We will honour your trust, your omotenashi, so that the outstanding legacy these Paralympic Games leave this country is a new perception of persons with disabilities."

#WeThe15 is the biggest-ever human rights campaign in history with the goal of ending discrimination against the 1.2 billion people with disabilities. #UnitedByEmotion | #Paralympics pic.twitter.com/kwgAuuvCID

Also noted in his speech was the recently-launched WeThe15 campaign, an awareness programme mobilised by the IPC and the International Disability Alliance to challenge how disabled people are perceived and treated globally across all areas of life.

The 10-year initiative seeks to represent the 15 per cent of the world's population who have a disability, and is supported by 20 international organisations, including Special Olympics, the United Nations Human Rights Office of the High Commissioner, the European Commission and Global Citizen.

Approximately 1.2 billion people around the world have a disability.

Parsons touched on the uncertainty of the Games being held due to the COVID-19 pandemic, which postponed the Olympics and Paralympics from 2020 to 2021.

"I cannot believe we are finally here," he said.

"Many doubted this day would happen.

"Many thought it impossible.

"But thanks to the efforts of many, the most transformative sport event on Earth is about to begin.

"Difference is a strength, not a weakness and as we build back better, the post-pandemic world must feature societies where opportunities exist for all.

"When the Games were postponed last year, Paralympic athletes were beacons of hope.

"They are a force of nature, a force for good."

Praise was given to the National Paralympic Committees and International Federations for supporting the athletes through the pandemic, with the President calling it "the strength of the Paralympic Movement".

As he wrapped up his speech, Parsons called for athletes to be the catalyst for change, encouraging them to shake off labels put upon them as disabled people and become "relabelled".

"If the world has ever labelled you, now is your time to be relabelled: champion, hero, friend, colleague, role model, or just human," added Parsons.

"You are the best of humanity and the only ones who can decide who and what you are.

"Your performances could change the fortunes of your lives.

"But most importantly they will change the lives of 1.2 billion forever.

"This is the power of sport, to transform lives and communities.

"And from tomorrow on, Paralympic athletes start once again to change the world."

Speaking before the IPC President, Tokyo 2020 President Seiko Hashimoto thanked key workers for their assistance during the COVID-19 pandemic and was grateful for Japan hosting the Games.

"I would like to express my gratitude and respect to all those around the world, including essential workers and those in medical services, who have shown such determination in overcoming these challenges," said Hashimoto.

"These Games are generously hosted by the people of Japan.

"In gratitude, we will continue to take all possible measures to prevent COVID-19 and ensure a safe and secure Games."

She added that preparations for the Paralympics had improved accessibility for those with impairments already, but hoped progress would be made following the Closing Ceremony on September 5.

"Since preparations for these Paralympic Games began, our society has come together to work towards building communities with universal design and developing barrier-free mindsets," Hashimoto said.

"Slowly but surely, these changes are starting to take root."

Tokyo is the first city to host two Paralympic Games, having held the second edition in 1964, following the inaugural Games at Rome 1960.

The Tokyo 2020 Paralympic Games are scheduled to close on September 5.