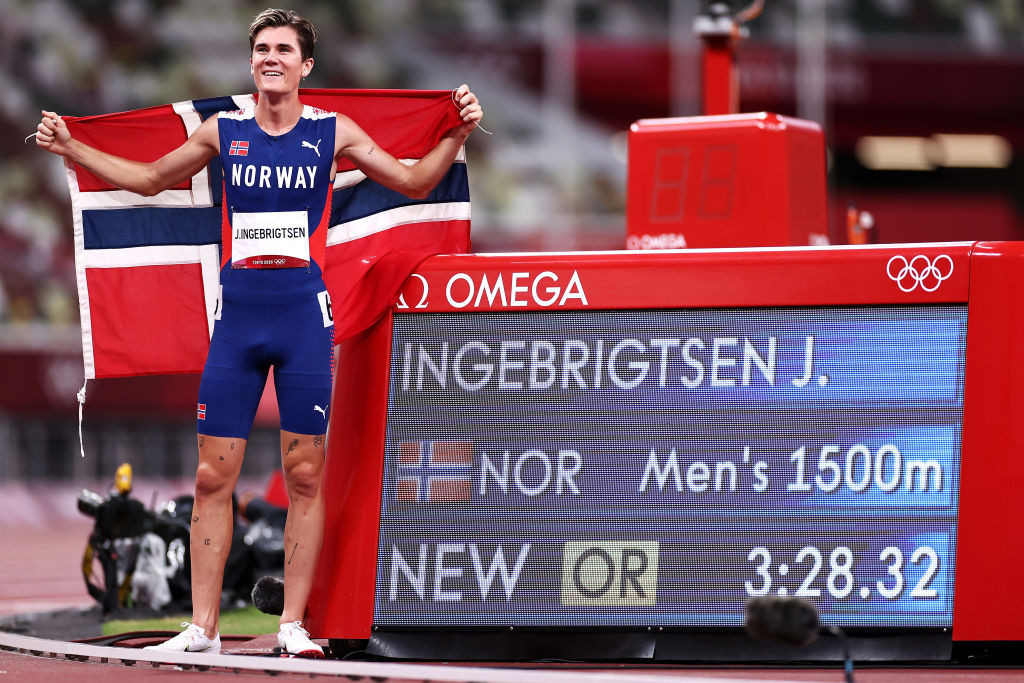 As someone remarked after the young man who announced his brilliance by winning European 1500 and 5,000m titles as a 17-year-old had come home in an Olympic record of 3min 28.32sec, "No one beats Jakob Ingebrigtsen 13 times in a row."

The rivalry between Norway's star and the 25-year-old Kenyan, always intense, looked in danger of going by the wayside when Cheruiyot failed to finish in the first three at his Olympic trials.

But victory at last month’s Monaco Diamond League meeting in a personal best of 3min 28.28sec, where an out-of-sorts Ingebrigtsen finished third, was enough for Cheruiyot to get back into the team.

Cheruyiot took over the lead from Ingebrigtsen after the first 400 metres, eager to push the pace.

But his conviction waned as the field came into the final bend and the young Norwegian swept past to embrace his destiny.

"When I realised that the Olympic Games are the biggest event for runners is what I wanted to win.

"I feel I wanted this for my whole life, so I feel really proud."

"Jacob ran the first 400m very fast, and I tried to follow him and then picked up the pace.

"When he passed me, I didn't respond because I felt some little pain in my right hamstring.

"Jacob is a good racer, a strong guy, young and I hope in the future we can run a world record."

Asked about giving his bracelet to Ingebrigtsen after the race he commented:

"I said, 'if someone beat me today, I'll give my bracelet to him'.

"It was a way to congratulate him."

"Of course, he's been the best runner and been undefeated for some time.

"We're lucky to be friends, all of us, and all of us are working hard to get the same goals.

"We respect each other."

The opening final on the closing night of track and field at the Tokyo Games, the women’s 10,000m, saw a similarly intense rivalry play out between the Dutch runner Sifan Hassan, who started Tokyo 2020 pursuing a remarkable 1500/5000/10,000m treble, and Ethiopian Letesenbet Gidey, who has run world records for both the 5,000 and 10,000m in the space of the last year.

While the whimsical Hassan has spread herself thin here, winning the 5,000m title but having to settle for bronze in last night’s 1500m final, Gidey concentrated all her efforts on the longer final, and she set about establishing a relentless pace from early in the race in what was clearly an effort to run the finish out of her Dutch rival.

At the bell, all three moved around the track like a single unit, until Hassan moved into the lead around the final bend and sprinted for home.

Gezahegne flew after her as Ethiopia's long-time leader had to settle for bronze.

"I'm so happy it's over and I survived,” said Hassan, who lay for a while in obvious discomfort after her race, holding a large ice bag to her head.

“The last two laps I was about to collapse and I tried to hang on.

“When I warmed up, I was telling myself that I'm so stupid but it was do or die!"

Referring to her bronze medal performance the previous evening, she added: "Today, I'm grateful for that, because yesterday, I was number three.

"That was not what I wanted, but what I needed.

"If I had won yesterday - if I raced smart and won the race - today I couldn't have finished, it was so hot."

An all-star United States women’s 4x400 metres relay team duly extended a record that has seen them claim gold at six straight Olympics over 25 years dating back to the 1996 Atlanta Games.

That result meant an 11th Olympic medal for Felix, extending her record as the most decorated woman in Olympic athletic history.

The US also won the men’s 4x400m, for whom 400m hurdles silver medallist Rai Benjamin brought the baton home in 2:55.70, with the Dutch forcing through for a silver in a national record of 2:57.18 and Botswana taking the bronze in an African record of 2:57.27.