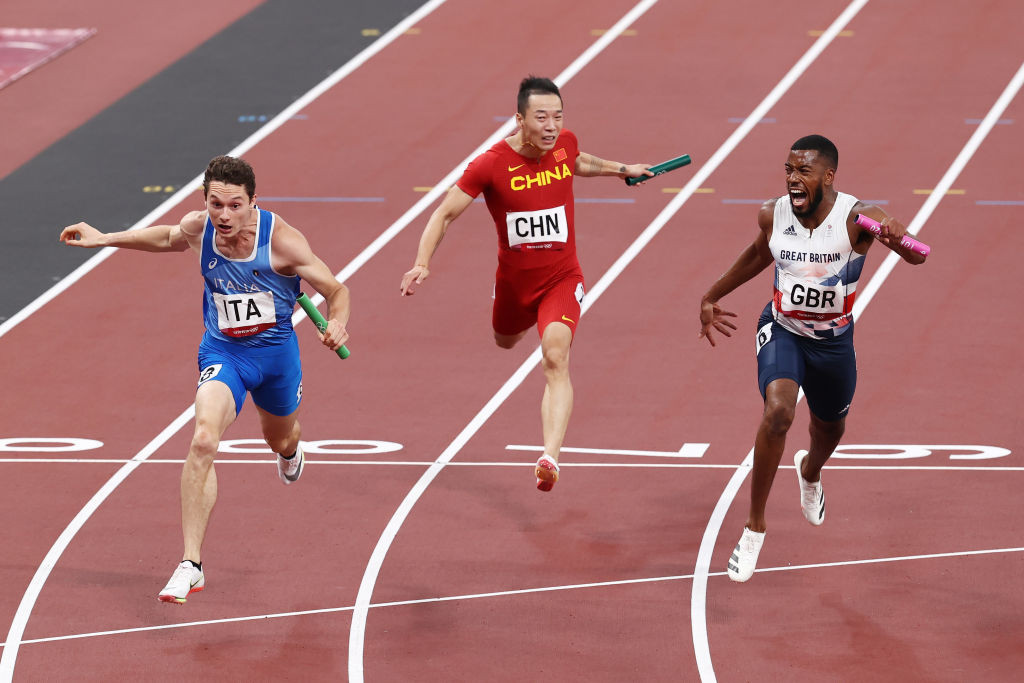 Italy brought their gold medal total in athletics to five in the space of five hours today as a stupendous last-leg run by Filippo Tortu brought them victory in the men’s 4x100 metres relay following Antonella Palmisano’s win in the women’s 20 kilometres race walk in Sapporo.

The Italians, whose followers in the stadium sang long and loudly into the muggy night, now stand joint top in the athletics medal table with the United States, following earlier victories from Gianmarco Tamberi, who shared high jump gold, 100m runner Marcell Jacobs, who ran the second leg to earn a second gold tonight, and Massimo Stano in the men’s 20km race walk.

Slick baton-passing by Britain presented last-leg runner Nathaneel Mitchell-Blake with what looked like the perfect opportunity to replicate the run which earned a home 2017 World Championship 4x100m title in London.

That would have delivered a third Olympic title in this event for Britain following the 1912 Stockholm Olympics and the shock win at Athens 2004.

But Tortu, who has seen his pre-eminence in Italian sprinting overtaken by Jacobs, created a different Olympic narrative as he made up at least a metre on the Briton to bring the baton home for Italy in a national record of 37.50sec.

Britain took silver, one hundredth of a second adrift, with bronze going to a Canadian quartet boasting individual 200m winner Andre De Grasse and clocking 37.70, ahead of China, fourth in 37.79, equalling their national record.

Jamaica finished fifth while the United States did not even make the final.

After crying in the wake of his achievement, Tortu said: "I don’t have any tears left.

"I need to recharge them for tomorrow because I need them more for the anthem (during the medal ceremony).

"This squad made me live this dream."

Jacobs said: "This is the year of Italy, this is our year.

"We won the Eurovision, we won the football European Championships, we won five gold medals (in athletics)."

The Italian flags were waving earlier in the day in Sapporo as Palmisano, who turned 30 today, defied stifling heat and the concerted challenge of a Chinese trio that included defending champion Liu Hong and recently established world record holder Yang Jiayu.

Palmisano was always in the leading group, and made a decisive break over the final stages to break all opposition and finish in 1hr 29min 12sec, with Colombia's Sandra Arenas earning silver in 1:29:37 and Liu coming through to claim bronze in 1:29:57.

Yang was so exhausted by her efforts to counter the Italian that she dropped down to 12th place over the final couple of kilometres, while Brazil’s 36-year-old Erica Sena, seeking a first Olympic medal, thought she had one as she filled the bronze medal position with 500 metres remaining - only to be given a two-minute penalty by the judges.

Five years ago in Rio Palmisano missed out on a medal by one place - now she had a golden recompense for that disappointment.

"Massimo’s gold medal gave me a lot of extra power," she said.

"He is my team mate and we are part of the same training group.

"In the countdown to the Olympics we both believed very much we could do it.

"We (both) come from very small towns in the south of Italy.

"We wanted to do something big, we have the same mentality.

"We trained three years ago in Japan - it was much hotter than today.

"It was a perfect way to celebrate my birthday!"

If China was disappointed by the race walk, where there had been talk of a clean sweep of medals, it earned some consolation in the women’s javelin, where an opening throw of 66.34 metres earned Shiying Liu gold.

A field that included Australia’s world champion Kelsey-Lee Barber and Poland's Maria Andrejczyk, whose effort of 71.40m this year put her third on the all-time list strove in vain to beat that early marker.

The Pole, who finished fourth at the Rio 2016 Olympics, had to settle for silver with 64.61m, and Barber got to within five centimetres of her with her last attempt.

"It's great because it's China's first gold medal in women's javelin." said Liu.

"So I feel proud of it and I think it will be a new start for Chinese athletes in javelin, no matter whether they are male or women."

Andrejczyk said: "After my 71-metre throw I got a very difficult injury on my shoulder again, so it was a battle with time to get to the Olympics.

"It was a time when I thought that I wouldn't manage to be ready for the Olympics, so I'm happy that I managed to do it.

The women's 4x100m final was won, unsurprisingly, by a Jamaican team that was able to bring in two runners with four Olympic 100m titles between them following the heats - Elaine Thompson-Herah and Shelly-Ann Fraser-Pryce, and the latter was able to hand over a handsome lead to last leg runner Shericka Jackson, who brought the baton home to secure gold in a national record of 41.02sec.

Rio 2016 champions United States had to accept silver, clocking 41.90, with a British team including the world 200m champion Dina Asher-Smith, running here despite not being fit enough to contest the longer sprint at these Games, securing a second successive bronze on 41.88.