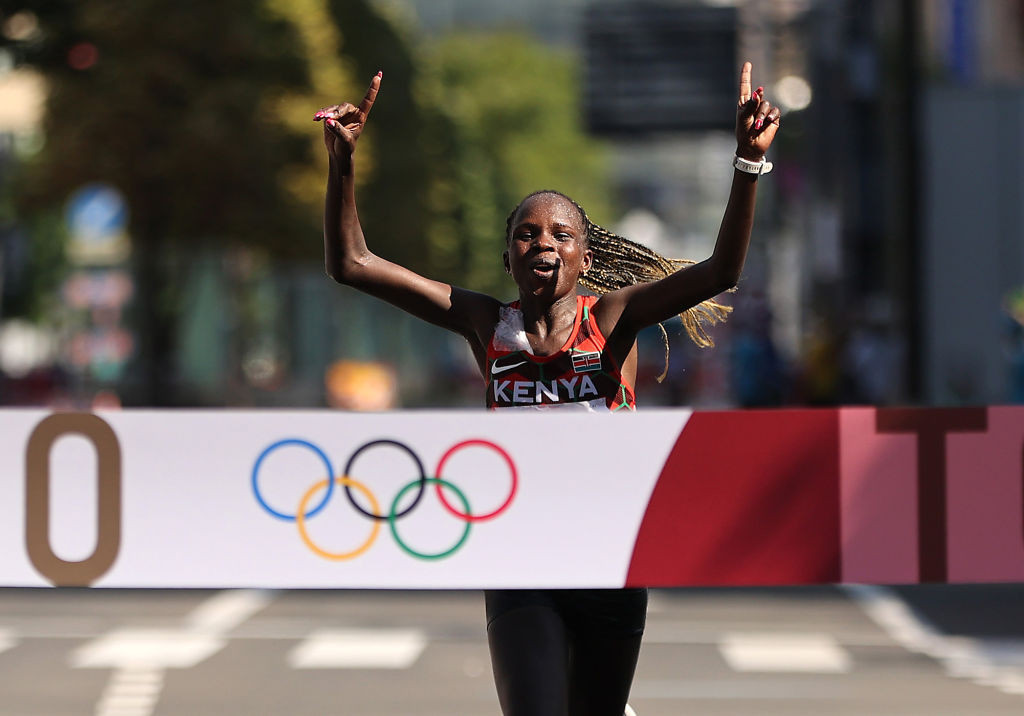 Kenya's Peres Jepchirchir stole a march on her team-mate, world record holder Brigid Kosgei, to win the women's marathon title on a day of heat and humidity in Sapporo which also saw a surprise bronze medal for Molly Seidel of the United States.

Jepchirchir acted as a domestique to Kosgei, who has won two London and two Chicago Marathon titles in the space of the last four years, but in the end she had the stamina and leeway to push on for personal glory, finishing in 2 hours 27min 20sec.

Kosgei, always in the leading group as it dwindled from 12 to eight and then from four to two, took silver in 2:27:36.

The winner had clocked 2:25:13 at the 2020 London Marathon, but her performance here behind inscrutable sunglasses was an extraordinary one in the circumstances.

"I'm so, so happy because we win as Kenya. first and second.

"I thank my God so much.

"I'm just thankful I managed [to cope] with that weather.

Seidel, 27, was best known as a cross country runner until she earned selection for Tokyo by finishing second in the US marathon trials in what was her first race over the distance.

"I would like to say thanks to my friend for winning gold for Kenya," Kosgei added:

"It is very hot but we tried to do our best."

With two kilometres remaining, the two leading Kenyans had broke away and Seidel was left to battle for bronze with Israel's long-time leader Lonah Salpeter, the European 10,000 metres champion and the winner of the 2020 Tokyo Marathon.

But Salpeter suddenly dropped out to leave the runner from Brookfield in Wisconsin with the relatively simple task of keeping herself in order in the closing stages.

She became only the third US woman to earn a medal in the Olympic marathon following the inaugural victory of Joan Benoit at Los Angeles 1984, and Deena Kastor's bronze at Athens 2004.

The start time of the race had been brought forward an hour to 6am in a bid to avoid the high temperatures that were being forecast for today.

Marathons and race walking were moved to Sapporo in October 2019 as organisers thought the northern city would be a cooler alternative to Tokyo itself.

But well before the end of the race, the conditions had become inimical to marathon running, with the temperature rising beyond 30.6 degree and humidity going beyond 62.7 per cent.

It was a measure of the circumstances in which this race took place that Kenya's Ruth Chepnegetich, winner the World Championships title two years ago in horrendous conditions in Doha, was unable to continue shortly after the field had passed 18 miles.

Ethiopia's Roza Dereje was fourth in 2:28:38, in front of the dogged Belarus runner Volha Mazuronak, who clocked 2:29:06.

Germany's Melat Kejeta finished sixth in 2:29:16 after spending much of the race in the leading group.

Mao Ichiyama was the top-placed home runner as she finished eighth in 2:30:13 for Japan.

Chepnegetich was one of 15 runners to drop out of this race.