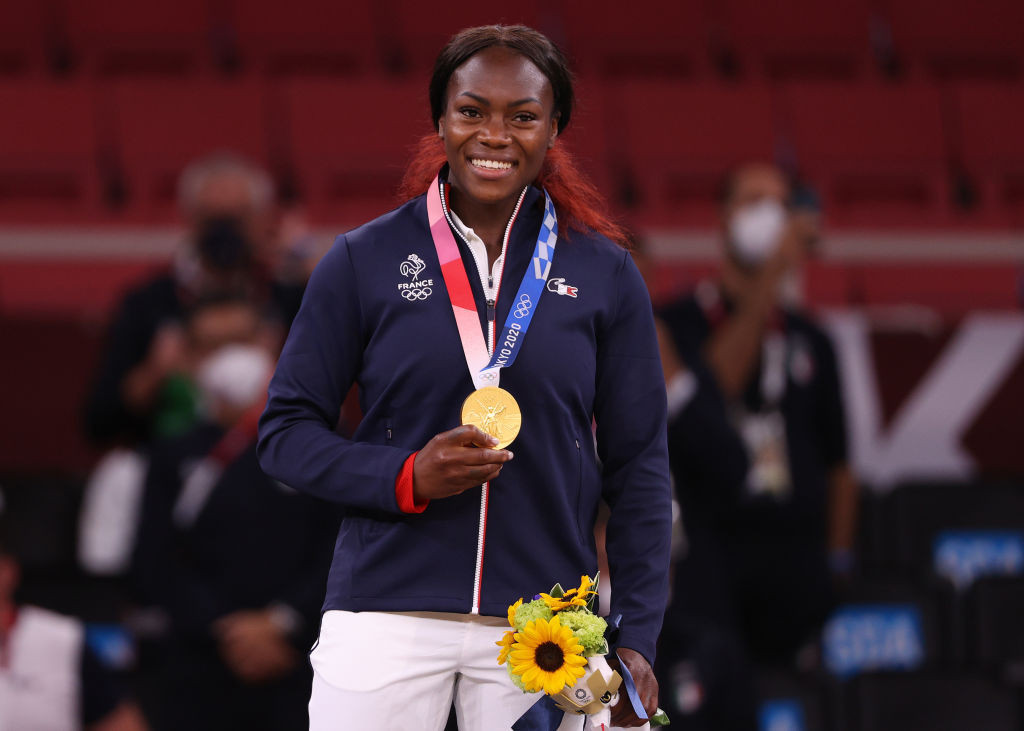 Five years after losing the Rio 2016 women’s under-63 kilograms final to Slovenia’s Tina Trstenjak, French judoka Clarisse Agbegnenou defeated the same opponent here this evening to earn the only gold her career has been missing.

The eruption of joy that followed the five-times world champion’s winning effort in golden score was followed by home celebrations as Japan’s Takanori Nagase, having beaten Belgium’s world champion Matthias Casse in the semi-final, took gold in the men’s under-81 category.

In so doing he emulated the previous night’s victory in the men’s under-73kg final by compatriot and defending champion Shohei Ono.

Both female judoka had looked unstoppable en route to the final, and for a while their Olympic final reunion was a matter of the defending champion being an immoveable object in the face of the French challenger’s irresistible force.

But Agbegnenou’s desire to win was palpable and time after time the rangy, immensely strong athlete had her formidably solid opponent on the defensive, and on the mat, without managing to make her aggression pay.

That changed shortly after the final had gone into golden score as the 28-year-old multiple champion, who earned her first world title in 2014, found her moment of treasure as she essayed another explosive throw and, this time, managed to land her opponent's shoulder on the tatami.

The French judoka rose from the clinch, her face working hard, and made the heart sign with her hands to her supporters. Now she had it all.

The obvious warmth and respect involved in the finalists' relationship was evident from Agbegnenou's comments at the post-event press conference:

"Tina and I have known each other for a long time," she said.

"We have very strong ties, as well, because she is externally and internally a wonderful person, and we have always thought what happens on the tatami, stays on the tatami.

"I said I would come visit her in Slovenia, a beautiful country, and I will certainly honour that promise.

"Tina, her judo is very difficult to understand.

"It took me years to grasp it, and that’s why I had many setbacks, but I believe that’s her strength.

"She’s somebody who knows what she wants, she knows where she’s going, and she doesn’t give anything.

"We will have a lot of time to celebrate this, to enjoy this, because things like this are very rare in a life."

As Nagase advanced upon Mongolia’s Saeid Mollaei in the men’s final, the prospect of the Nippon Budokan, the sacred place of Japanese judo, witnessing another glorious victory by one of its own appeared imminent given the quality of opposition he had beaten to arrive there.

Like Agbegnenou, the Japanese judoka was constantly moving forward, his smaller but nimble opponent energetically resisting and evading, taking the bout into golden score.

But there was only so much Mollaei could do to resist the home judoka's intent, and finally, Nagase found the way to win as he unsettled the Mongolian with leg feints before flipping him for a waza-ari that meant another Budokan home gold.

"Since this Games is held in Japan, and the fact that the Olympics has been held here at the Budokan, it actually motivated me very much," said Nagase.

"I have experienced many setbacks for the past five years, for instance, injury.

"Also, I was not able to win matches, many matches for a certain period.

"Before Rio, I did not have such setbacks.

"Experiencing such setbacks made me improve and grow and also to get the technical power in judo.

"That is why I was able to gain (the) gold medal today."

Casse, having lost to Nagase in the semi-final, won the second of the men’s bronze-medal matches.

Casse's Georgian opponent Tato Grigalashvili, who had come through the repechage, was despatched with sudden efficiency in normal time for ippon.

The first of the two men’s bronze-medal matches lasted barely over a minute as Shamil Borchashvili of Austria, who had gained a waza-ari over Germany's Dominic Ressel after just 13 seconds, floored him for ippon.

Before leaving the tatami, the Austrian got down on his knees and kissed it before sobbing with emotion, his hand over his eyes as the TV cameras zoomed in.

The first of the bronze medal matches in the women's under-63kg category saw beaten semi-finalist Maria Centracchio of Italy earn a hard-won victory against the durable repechage winner Juul Franssen of The Netherlands, the 2019 world bronze medallist.

Franssen, taller and seemingly stronger, resisted the 2019 European Games bronze medallist's unceasing attempts to throw her, but accrued a succession of penalties in so doing.

In the second minute of golden score, she committed another transgression and was brandished a red card.