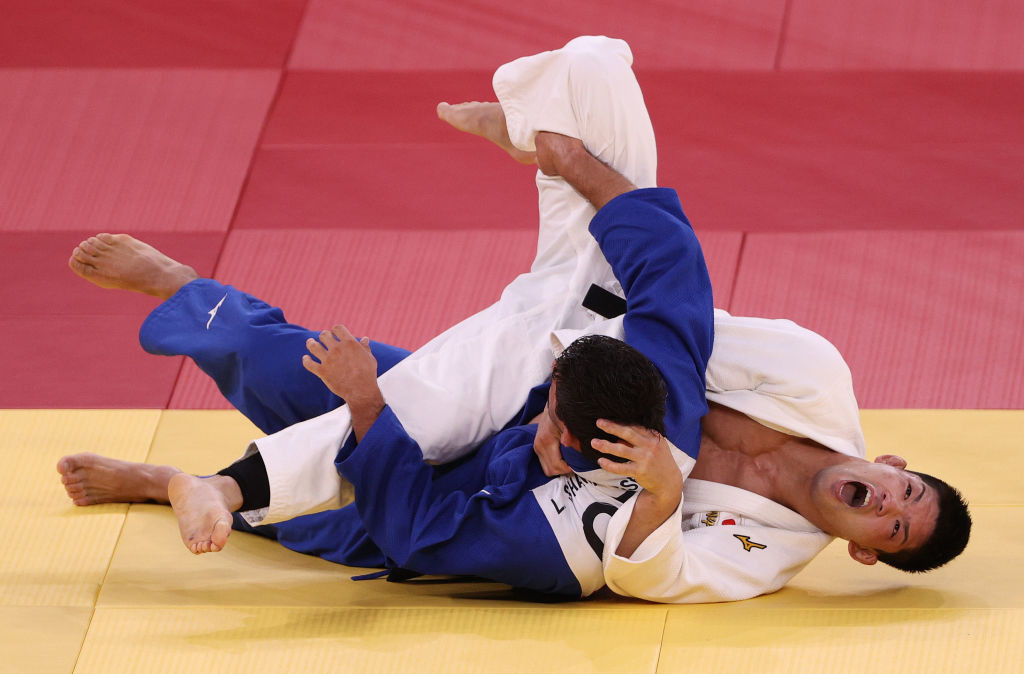 Before the home hero, three times a world champion, won a relentless and extended contest against Lasha Shavdatuashvili, Gjakova had earned Kosovo, which made its Olympic debut at the Rio 2016 Games, a third Judo gold.

Gjakova followed history-maker Majlinda Kelmendi, who won the under-48kg title in Rio, and Dutria Krasniqi, who retained that title for her country here in this arena two nights ago.

"Of course, I didn’t want this Olympic final to end that way, but there are rules from the IJF (International Judo Federation) I didn’t make, so I believe the decision of the ref," Gjakova said.

Cysique added: "First, I thought it was a bit unfair. I really didn’t understand what had happened. But afterwards, as Nora said, it’s the referee's decision, and I have to accept it."

By contrast, the men’s final had moved into its sixth minute before one deadly movement from the implacable Ono, whose ears bear testimony to his years of tatami manoeuvres, decided the contest by waza-ari.

Afterwards, Ono demonstrated the respect that had underlaid an epic final by seeking out and hugging the taller, rangier Shavdatuashvili.

He later offered some clues as to what was going on during his activities behind that impassive visage.

he said at the post-event press conference.

"Just as usual, I tried to concentrate on focus and perseverance and patience.

"I remember these key words for me."

Asking about fighting in an arena that has been the cradle of Japanese judo since it was built to host that sport at the 1964 Tokyo Olympics, he responded:

"For me, Nippon Budokan is a special place.

"When I was a student, I played often in Nippon Budokan.

"However, since I graduated from university, in this holy place of judo I had less opportunities since I am more than 29 years old.

"So maybe for the remaining years of my judo career, maybe not that long, I wanted to inscribe the memory into my head."

Reflecting upon the difference between this Olympic win and the one he achieved in Rio, he added:

"At the time of the Rio Olympics, I was younger, and I was able to win the gold medal with my youngness and also the momentum.

"I was able to win the gold medal because of perseverance.

the man who made it so, Shavdatuashvili, commented: "Of course, it is always disappointing when you lose the final, but this was the best fight, the best contest, the best battle in the final between us and the best fight of the day."

The first of the men's bronze medal matches saw South Korea's An Changrim earn a victory by waza-ari in normal time against Azerbaijan's Rio 2016 and 2019 world silver medallist Rustam Orujov.

The second was between Canada's repechage winner Arthur Margelidon and Mongolia's Tsogtbaatar Tsend-Ochir, beaten in his semi-final by Ono.

It was over within a little more than 30 seconds as the jubilant Mongolian won by i ppon.

The second women's bronze-medal match went into a minute of golden score before the world champion, Canada's Jessica Klimkait, found the way to win by waza-ari against Kaja Kajzer of Slovenia.

It was the first Canadian women's Olympic medal and it came after Klimkait, who won a long selection battle to earn this place ahead of , had to compose herself after losing a long, tough semi-final with Cystique on referee's decision after golden score.

Medals on the night were handed over by the International Olympic Committee (IOC) President Thomas Bach.

Earlier in the day, Sudan's Mohamed Abdalrasool became the second judoka to pull out of the Olympic 73kg competition before facing Israel’s Tohar Butbul.

Abdalrasool weighed in for the bout but then refused to show up this morning.

Algeria’s Fethi Nourine had earlier been sent home from Tokyo 2020 and suspended after he refused to fight Butbul.