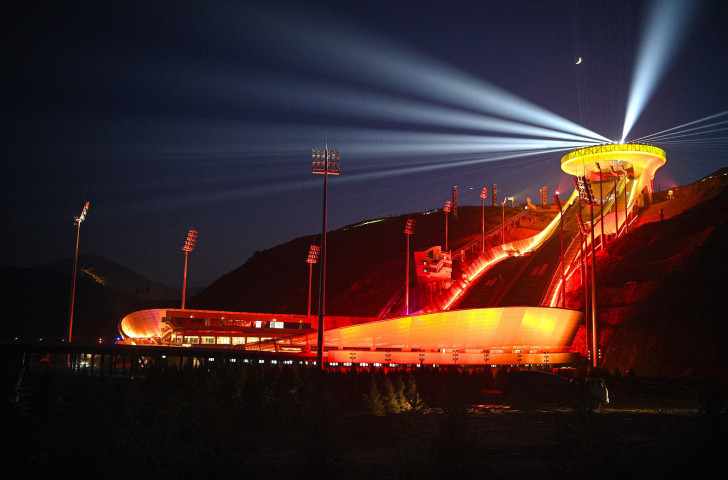 Journalists were taken on a tour of the snow event venues for the 2022 Beijing Winter Olympic Games as the hosts show they are on track despite the ongoing uncertainty of the COVID-19 pandemic.

While China has largely eliminated the local transmission of coronavirus, it has maintained strict quarantine regulations.

Organisers have not announced what rules will be in place for athletes, officials and coaches at the 2022 Winter Olympics, or whether fans will be allowed.

Jia Maoting, general manager of the company overseeing construction of the venues, told reporters that the "pandemic situation is uncertain, we cannot guess how it will develop."

Maoting added: "We have solid determination to face the changing world.

"We built good venues in any case and then we wait and expect a good result."

Zhangjiakou is about 125 miles west of Beijing in Hebei province.

The cities are connected by a motorway and a high-speed rail line.

It is due to host ski jumping, snowboarding, freestyle skiing, cross-country skiing, and Nordic combined and biathlon competitions during the Games.

Zhangjiakou is also the site for the world’s first flexible DC power grid.

The grid will supposedly ensure the Beijing 2022 Winter Games are sustainable and achieve 100% green energy use.

The technology can deliver 14 billion kilowatt-hours of clean electricity every year, meeting the power needs of 26 Winter Olympic venues in the Beijing, Yanqing and Zhangjiakou zones.

Numerous politicians and human rights groups have called for a boycott of Beijing 2022 over China's treatment of the Uyghur and other Muslim ethnic groups in the north-western region of Xinjiang.

Several countries, including the United States, Canada and the Netherlands, have accused China of committing genocide.

This was due to reports that, as well as interning Uyghurs in camps, China has been forcibly mass sterilising Uyghur women to suppress the population.