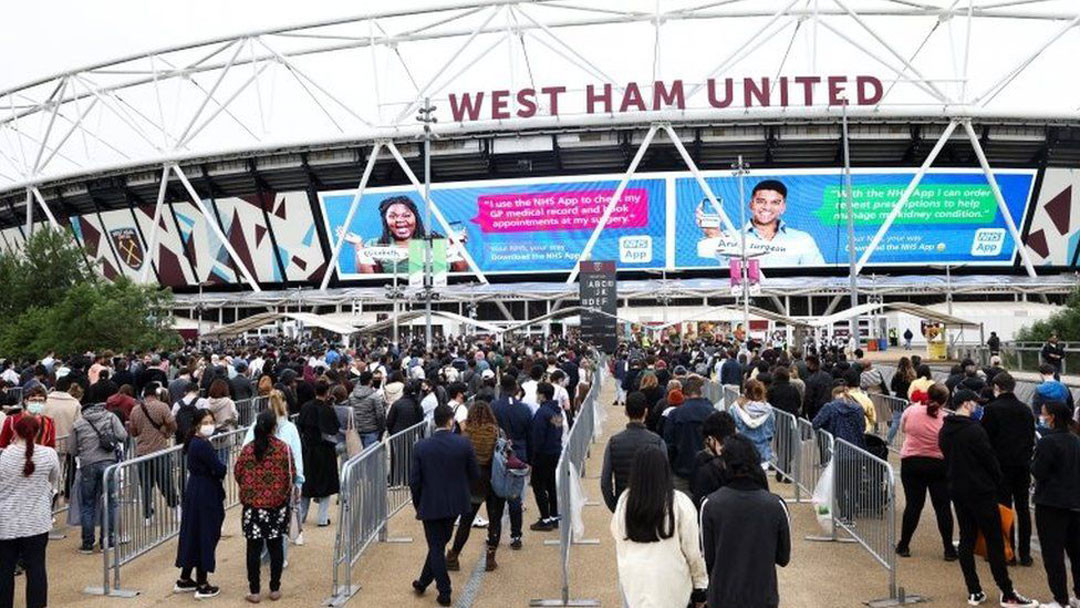 London’s Olympic Stadium has staged another "Super Saturday" nearly nine years after Jessica Ennis-Hill, Greg Rutherford and Mo Farah produced one of the greatest nights in British sporting history, except this time it was not gold medals being handed out but coronavirus vaccines.

A record 15,000 local people turned up to be given their jabs at pop-up National Health Service (NHS) vaccination clinics.

The arena, now officially known as the London Stadium, had people turning up at 10am when the clinic opened and were still queuing 10 hours later when it closed.

The event was organised in association with Premier League side West Ham United, the anchor tenant of the Stadium.

"Getting as many people vaccinated as possible will save lives and is the best way for us to beat COVID-19," Karren Brady, the vice-chairman of West Ham, said.

"The football family has pulled together throughout the pandemic in support of our local communities and West Ham United is proud to continue our strong partnership with our local NHS trusts, assisting with this event as part of the national effort.

"This is an important step on the road to once again all of us enjoying the things we love doing together."

Mayor @rokhsanafiaz attends the vaccination event at the London Stadium, urging residents to book in for their first NHS jab.

The event was one of a number hosted by football clubs across London on Saturday, with Chelsea's Stamford Bridge, Tottenham Hotspur Stadium, Charlton Athletics’ The Valley, and Crystal Palace's Selhurst Park also welcoming local people aged 18 and over.

So far, a total of 74.3 million vaccine jabs have been administered in the United Kingdom with 46.4 per cent of the population having receive both doses.

The UK Government Vaccines Minister, Nadhim Zahawi, tweeted: "This is an incredible effort by the whole London team.

"Happening across the City at Spurs, Arsenal, Charlton and West Ham too.

"Come on London let’s get vaccinated!"

Last year, “Super Saturday” on August 4 during London 2012 was named as Britain’s greatest moment at a Summer Olympic Games.

Ennis-Hill, Rutherford and Farah all won gold medals within the space of 44 minutes.

Ennis-Hill, the golden girl of Team GB, smashed her own British record to win the heptathlon, Rutherford took gold in the long jump with a fourth-round leap of 8.31 metres and finally Farah stormed to 10,000 metres gold.

This latest "Super Saturday" could prove to be just as important.

"We are proud to support the brilliant work of the NHS by making the Stadium available for the vaccine rollout in this part of London on Saturday," said Graham Gilmore, the chief executive of London Stadium.

"We are committed to helping our local community during this pandemic."