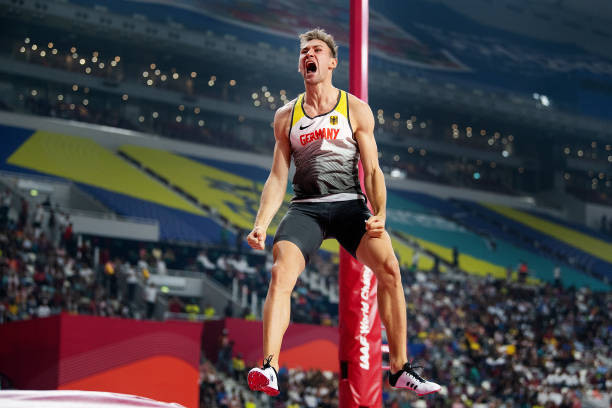 Germany’s world decathlon champion Niklas Kaul, effectively sure of contesting the Tokyo 2020 Olympics, is in eighth place overnight in the World Athletics Challenge Combined Events competition on the home soil of Ratingen as three compatriots fill the first three places.

Andreas Bechmann leads with 4,370 points from veteran Kai Kazmirek on 4,304 and Tim Nowak is third on 4,194, with Bechmann and Nowak appearing to be in a contest for the third and final potential German place for the Olympics.

The 23-year-old Kaul has already surpassed the men’s Olympic standard of 8,350 points thanks to his 8,691 total in winning the world title in Doha in 2019, although he is still coming back to peak condition having taken 2020 off, during which time he had elbow surgery.

After finishing fifth on 8,263 at last month’s Götzis meeting across the Austrian border in his return to decathlon action, he will be keen to at least keep things ticking over in the Stadtwerke Ratingen Mehrkampf-Meeting.

Thirty-year-old Kazmirek, bronze medallist at the 2017 World Championships in London, also exceeded the Olympic qualifying mark in Doha, and finished two places behind Kaul in Götzis, recording 8,190 - thus bettering the German selection minimum set for that meeting by 40 points.

But both men are competing at the last chance German multi-eventers have to earn a score before Tokyo as a precaution.

In order for this effective pecking order to be disturbed it would require two of the other Germans to secure the Olympic qualifying mark, which would represent a personal best them.

With 24 men due to contest the Tokyo 2020 decathlon, eight places are yet to be confirmed.

The picture is further complicated by the fact that there will be decathlon and heptathlon events at this weekend’s United States Olympic trials in Eugene.

Each National Olympic Committee may only enter three athletes for Tokyo 2020.

Poland’s Pawel Wiesiolek is fourth overnight in Ratingen on 4,152 from fifth-placed Niels Pittomvils of Belgium on 4,076.

Meanwhile Germany’s Carolin Schafer withdrew from the Ratingen heptathlon while remaining in contention for Olympic selection.

Benin's Odile Ahouanwanou is top of the standings on 3,830 points.