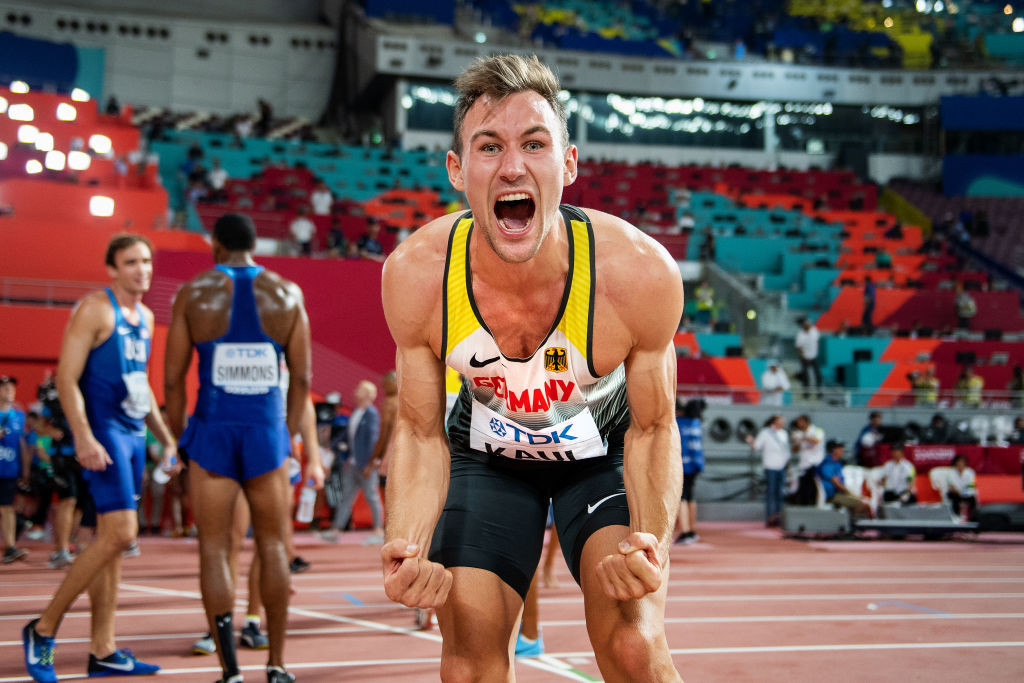 Germany’s world decathlon champion Niklas Kaul will seek to confirm his place at the Tokyo 2020 Olympics as he takes part in the World Athletics Challenge Combined Events two-day meeting in Ratingen in his home country, which starts tomorrow.

The 23-year-old has already surpassed the men’s Olympic standard of 8,350 points thanks to his 8,691 total in winning the world title at Doha in 2019, but is still coming back to peak condition having taken 2020 off, during which time he had elbow surgery.

After finishing fifth on 8,263 at last month’s Götzis meeting across the Austrian border in his return to decathlon action, Kaul will be keen to make an Olympic statement of intent in the Stadtwerke Ratingen Mehrkampf-Meeting.

Kaul’s compatriot Kai Kazmirek, the 2017 world bronze medallist, is another who has the Olympic standard from 2019 having scored 8,444 to win in Ratingen and will be looking to get close to that to secure a spot for Tokyo.

Also among those fighting for places on Germany’s Olympic team will be 2016 world indoor heptathlon bronze medallist Mathias Brugger, who set his personal best of 8,304 points in 2018, and Tim Nowak, whose best is 8,229 from 2018.

The qualification period for combined events - for which the women’s heptathlon standard is 6,420 points - ends on June 29.

Kaul’s 29-year-old compatriot Carolin Schafer also has the Tokyo standard thanks to the 6,426-point score she achieved in 2019, but the 2017 world heptathlon silver medallist will want to take the chance to demonstrate good form.

Schafer, who set a personal best of 6,836 in 2017, had planned to compete in Götzis in May, but missed that meeting, explaining on social media that unexpected vaccination side effects had disrupted her preparation.

She will instead line up in Ratingen, where she will be joined by Austrian record-holder Verena Mayr, who won world bronze in 2019 as Verena Preiner, and Austria’s world indoor pentathlon silver medallist Ivona Dadic, who both have the Tokyo entry standard from 2019.

Others with the standard in their sights will be Germany’s European under-23 silver medallist Sophie Weissenberg and Vanessa Grimm, who set a personal best of 6,316 points to finish fifth in Götzis at the end of last month.

Elsewhere on the continent this weekend sees the First, Second and Third Leagues of the European Athletics Team Championships taking place following the earlier staging of the Super League event in Silesia last month.

Five recently-crowned European indoor champions from Torun will be on First League team duties at the refurbished Cluj Arena in Cluj-Napoca, Romania.

All five are representing countries with credible chances of securing one of the two available promotion places back into Super League for the 2023 edition of this competition.

Ajla Del Ponte and Angelica Moser, respective gold medallists in the women’s 60 metres and pole vault in Torun, will seek to help Switzerland reach the Super League for only the second time since the formation of the competition in 2009.

Switzerland can also call upon 2019 200m bronze medallist Mujinga Kambundji in her specialist distance and the 4x100m relay, while her younger sister Ditaji will make her senior outdoor debut for her country over the 100m hurdles, where she will face the European outdoor champion Elvira Herman of Belarus.

The standout name on the Dutch team is European indoor 400m champion Femke Bol who reverts back to that distance from her outdoor specialty of the 400m hurdles.

The Czech Republic, narrowly relegated from the Super League two years ago, will rest their chances of a bounce-back on the presence of athletes such as European indoor shot put champion Tomas Stanek, former world champion Vitezslav Vesely and Nikola Ogrodnikova in the javelin and former European indoor champions Pavel Maslak and Jakub Holusa in the 400m and 1500m respectively.

Greece finished 10th in the Super League in 2019 to slip back down into the second tier but most of their top names will be competing in Cluj-Napoca including Miltiadis Tentoglou, who tops this year’s world long jump list with 8.60 metres.

Five European indoor champions will be competing at the European Team Championships First League in Cluj-Napoca this weekend. ?

? The event will be streamed live through the European Athletics website. #ETCH2021

Ireland’s withdrawal from the competition means they will get automatically relegated into the Second League in 2023 along with the two lowest-ranked teams at the conclusion of the weekend.

Bulgaria’s 37-year-old, five-time European sprint medallist Ivet Lalova-Collio will hope to inspire her team to promotion from the Second League in their meeting  on the home soil of Stara Zagora.

None of the participating nations will drop down into the Third League.

Austria withdrew from the event citing coronavirus concerns and Israel also dropped out after a team member tested positive for coronavirus.

As a consequence both teams will get automatically relegated from the Second League along with Russia who are still banned from competing internationally.

Serbia missed out on the sole Third League promotion spot in 2019 after a dramatic disqualification in the men’s 4x400m.

But with the top three teams to gain promotion in Limassol in Cyprus this weekend, Serbia should secure a comfortable passage into the third tier of the biennial competition.