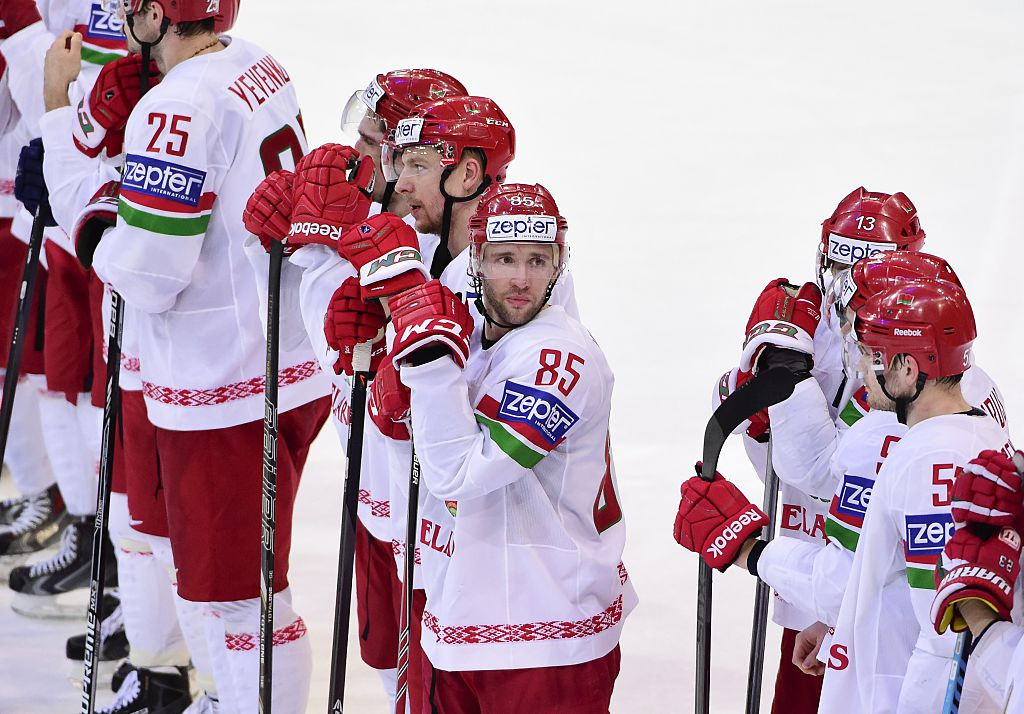 Belarus, obliged to play under a new version of their national flag installed by the organisers of the International Ice Hockey Federation (IIHF) World Championship in Riga, were beaten tonight by rank outsiders Britain.

A 4-3 defeat in their Group B match at the Olympic Sport Centre keeps Belarus, formally seeded 13th, compared to Britain's 19th, one place off the four qualifying spots for the quarter-finals, with three matches remaining before the knockout stage.

Despite strong criticism from IIHF President René Fasel, the Belarus flag has been replaced by the white-red-white version used by the opposition movement in the country.

According to Latvian news agency LETA, the flags were replaced by the Minister of Foreign Affairs, Edgars Rinkēvičs, and Riga Mayor Mārtiņš Staķis.

The move followed Belarus President Alexander Lukashenko's decision to "hijack" a plane in order to arrest a journalist, and both countries have expelled diplomats from the other in an escalating row over the matter.

Liam Kirk put Britain ahead in the first period, with Vladislav Kodola equalising in the second period only for Ben Davies and Kirk to score further goals.

Britain went further ahead midway through the third period through Mike Hammond, although Geoff Platt pulled a goal back shortly after and with less than two-and-a-half minutes left Shane Prince brought the deficit down to a single goal.

Britain held on to record their first win of the tournament.

Kazakhstan, who had previously earned overtime victories against the hosts and defending champions Finland, earned three points for their first regulation win today as the defeated Germany 3-2 in Group B at the Arena Riga.

Pavel Akolzin scored the winning goal on a late third-period breakaway for a side whose previous best performance in the World Championship came in 2005 when they finished 12th.

The German side, who had won all three of their previous matches, still head Group B with nine points from four matches.

Latvia, Finland and Kazakhstan, all on seven points, currently fill the three other quarter-final qualification places.

In the second of the Group B matches, top seeds Canada, who had suffered three consecutive losses, halted the slide with a hard-fought 4-2 win over Norway.

But the Canadian chances still look slim, especially as the opponents in their last three matches include Kazakhstan and defending champions Finland.

Goals by Connor Brown and Adam Henrique put Canada 2-0 up in the first period, but in the second Norway came back to equalise through goals from Olsen Valkvae and Olsen Rosseli.

Adam Mangiapane restored Canada's advantage and Henrique made the score a little more comfortable for Canada by scoring with 10 minutes remaining.

In the first of the Group A matches, the ROC team earned a third win in four matches with a 3-0 scoreline against Denmark, with Ivan Morozov providing a goal and an assist.

The ROC team are now second with the same number of points, nine, as leaders Slovakia, who have won three from three.

Denmark are still hanging onto the fourth qualifying place.

The tournament - which was originally to have been co-hosted by Belarus and Latvia, before those plans changed - continues tomorrow.