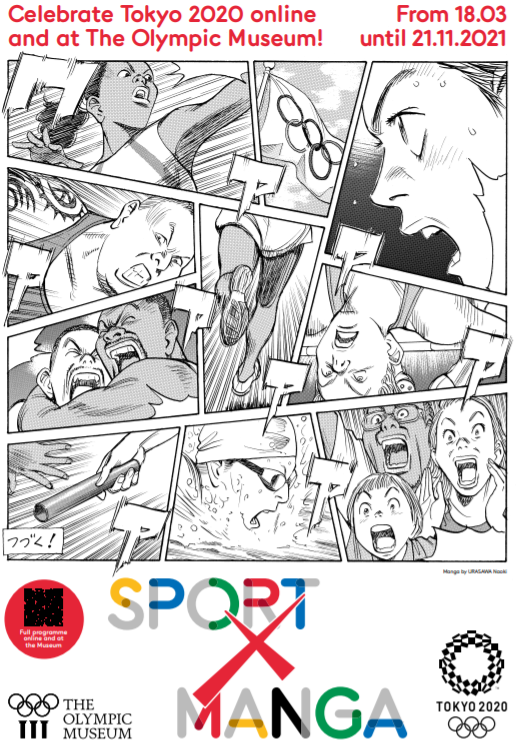 The Olympic Museum in Lausanne has launched a new exhibition featuring sport as it is depicted in manga comic books to run throughout the summer marking the Tokyo Olympic and Paralympic Games.

Exhibits include the work of Naoki Urasawa who designed the poster for the exhibition.

"They appear in weekly magazines, and the matches described generate even greater passions than 'real' sport," Urasawa said.

"In this poster, I have concentrated the whole essence of Japanese sports manga.

"In the bottom-left box, you can see the text meaning 'To be continued!'

"Because, in real manga, readers have to contain their impatience for a whole week to find out what happens next."

Sport manga appeared after the Second World War and is said to have played an important role as Japan was reintegrated into international sport.

The gardens outside the museum in Lausanne have been adapted so that visitors pass through gateways, which exhibition organisers say are "loosely inspired by the famous toriis placed in front of Shinto temples."

A photographic exhibition recalling the Tokyo 1964 Olympics and displays featuring notable Japanese Olympians have also been placed in the gardens.

Inside the museum, visitors are welcomed by Miraitowa and Someity, the Olympic and Paralympic mascots both inspired by manga forms.

Examples of the Torches will be on display.

There is also a special exhibit featuring skateboarding, surfing, sport climbing, baseball-softball and karate, all sports added to the Olympic programme in Tokyo.

Three photo booths have been installed, in the shape of Japanese "capsule hotels".

Museum visitors will be able to take selfies inspired by "kaki moji", the words used in the drawings.

They will also be able to try and recapture the moves of Captain Tsubasa, a popular character in manga.

The programme features livestreamed events which are set to include a session with stadium architect Kengo Kuma, though organisers hope that it will be possible to have a live audience.

A model of the National Stadium, which Kuma designed, is also on display and visitors to the museum will be able to take a virtual tour of the stadium through augmented reality in which "visitors can imagine how an athlete feels when entering the stadium."

Although events are subject to change depending on the pandemic, organisers are hoping to stage a "24 hours of J-Pop" event on June 13.

Then to coincide with the opening of the Games themselves, a concert by Japanese Afrobeat group Ajate is planned for July 23.

Even the restaurant at the museum will have a Japanese flavour, with dishes such as Miso soup, chirashi with soy-marinated tuna, vegetable gyoza and chicken teriyaki on he menu.

Curated by Stephane Beaujean, a former co-artistic director of the Angoulême International Comics Festival, the exhibition runs until November 21.

Meanwhile the Olympic Torch Relay is scheduled to visit the manga museum at Tokiwa-sō as it approaches Tokyo in the final days before the Games.