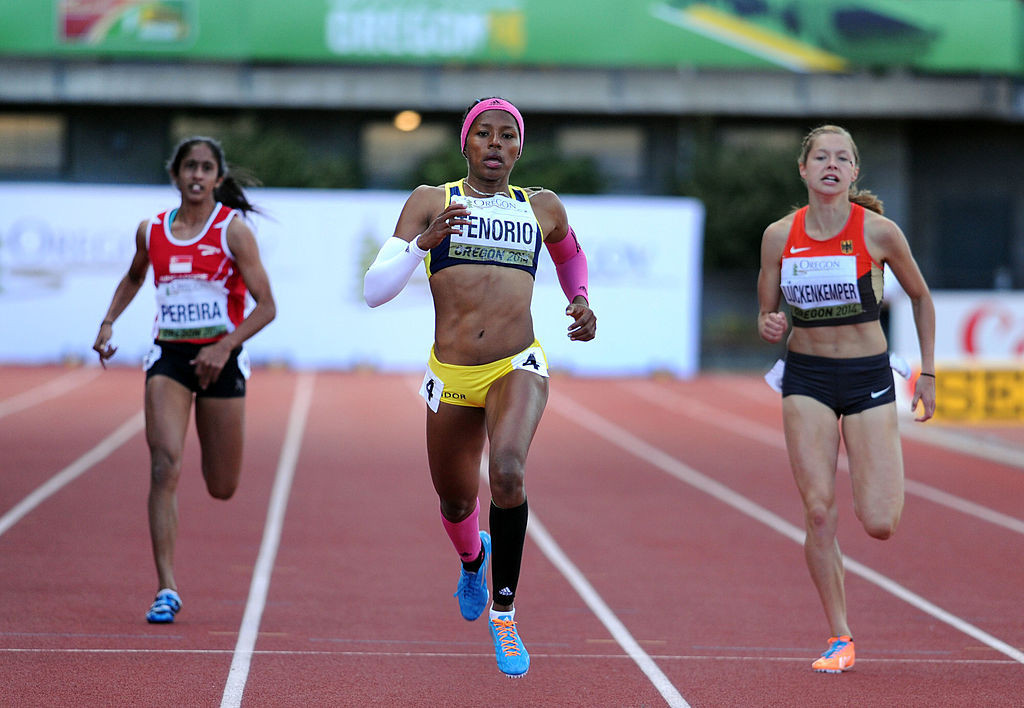 Ecuador’s women’s 4x100 metres team, who arrived in Poland ranked 40th in the world standings, will be among the 16 teams contesting the Olympic title this summer after setting a national record of 43.86sec tonight at the World Athletics Relays Silesia21.

That performance in a cool and empty Silesian Stadium was enough to give them one of the two fastest loser places in a final tomorrow where all eight teams are guaranteed a place in Tokyo 2020.

Ecuador finished third in their heat behind winners The Netherlands, who clocked 43.28, the fastest time of the night, and hosts Poland, whose time of 43.64 was the third fastest behind that of the final heat winners France, who recorded 43.51.

Also going through to the final with a small "q" after their name were a jubilant Danish quartet who clocked 44.25 in finishing third in their final heat.

Brazil, who claimed victory in the opening women’s 4x100m heat in 43.56sec after taking advantage of a hesitant final changeover by Italy, were swiftly deflated by the news that they had been disqualified because their final leg runner Rosangela Santos, had twice stepped on the line.

That left Italy as winners in 44.02, and promoted Japan, who had finished third in 44.17, into the second automatic qualifying spot.

In the men’s 4x100m Ghana chased home a Dutch quartet anchored by 36-year-old three-times European gold medallist Churandy Martina to finish eight thousandths of a second back with both teams credited with a time of 38.79.

Turkey’s world 200m champion of 2017, Ramil Guliyev, was left with an impossible gap to close on the final leg, particularly after an indifferent baton exchange, and came home last in 39.60.

Germany, who had yet to qualify for Tokyo 2020, made certain by reaching the final after taking second place in 38.70 behind the 38.45 clocked by defending champions Brazil in the second heat after taking advantage of a poor last changeover by Japan.

But Japan, running an experimental team after earning their Tokyo place in winning bronze at the Doha 2019 World Championships, nevertheless made the final with a time of 38.98.

Italy’s Filippo Tortu held off South Africa’s Commonwealth champion Akani Simbine on the final leg to bring home victory in 38.45 - the second fastest in the world this year along with Brazil - with the South Africans, already qualified for Tokyo 2020, clocking 38.49.

Joining them in the final are:
Brazil
South Africa
Germany
Netherlands
Ghana
Japan
& Denmark, who edge Ukraine by 0.001 to take the eighth qualifying place for the #WorldRelays final.

A great night of sprinting for Denmark was rounded off when their men earned the final spot in the final after setting a national record of 39.06 in finishing fourth in heat two.

They were just one thousandth of a second faster than Ukraine, who had clocked 39.06 in the opening heat.

The Dutch men’s 4x400m runners matched their women sprinters by producing the fastest qualifying time of the night, with the quartet that earned them the European Athletics indoor title in Torun in March clocking 3min 03.03sec.

There was an unpleasant surprise for the hosts, however, as their team - which had set a world record in winning the World Indoor title in Birmingham in 2018 - missed qualifying by one place after Italy’s Vladimir Aceti overhauled Karol Zalewski on the final leg to claim the second qualifying position in heat three.

Japan were second fastest qualifiers on 3:03.31, and South Africa third on 3:03.79, with a Belgian team including the Borlee brothers and a Botswana team that maintained the 10 metres lead built up for it by first leg runner Isaac Makwala, the Commonwealth champion, also progressing.

The Dutch quartet that won the European Athletics indoor title was only fourth fastest qualifier in 3:28.40 but there will surely be a lot more to come from them tomorrow.

Nothing quite like the drama of a Mixed 4x400m!

Watch out for these eight teams in tomorrow's #WorldRelays final on their way to #Tokyo2020:

Tokyo places for the first Olympic mixed 4x400m event were also on offer to those reaching tomorrow’s final, and the eight who made it were led home by Italy, who clocked 3:16.52 and Brazil, who recorded 3:16.53.

The Dominican Republic, Belgium, The Netherlands and Spain secured the other automatic qualifying places, with Britain and Ireland going through as the two fastest losers.

The hosts earned the first title of the weekend as Joanna Jozwik and Patrick Dobek won the 2x2x400m relay in 3min 40.92sec, with silver going to the Kenyan pairing of Naomi Korir and Ferguson Rotich in 3:41.79 and bronze being won by Slovenia's Anita Horvat and Zan Rudolf in 3:41.95.

The second final of the night, the shuttle hurdles relay mixed, was won by Germany in 56.53sec ahead of Poland, who clocked 56.68, and Kenya, who recorded 59.89.