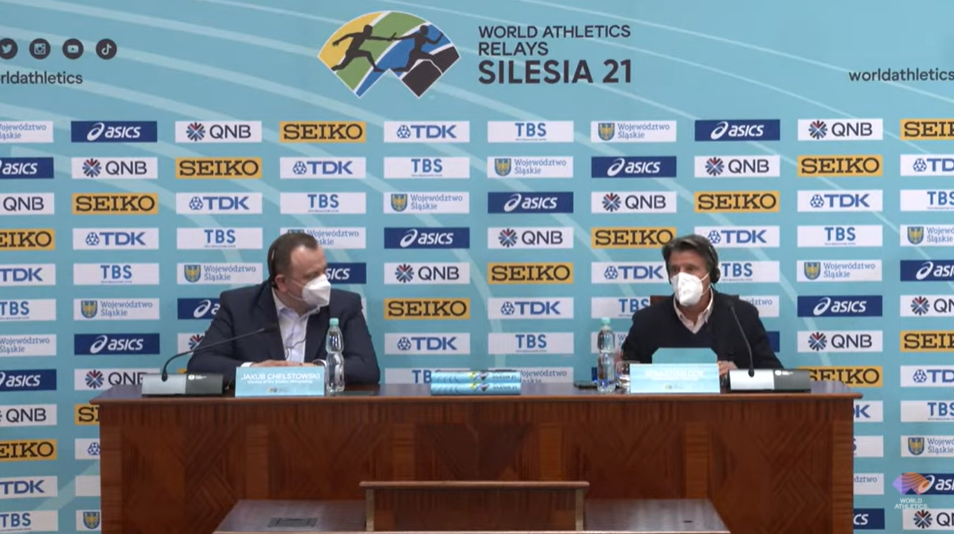 Tokyo 2020 places are the target at the World Athletics Relays which starts tomorrow in Chorzow, Poland - while for the organisers the aspiration will be the staging of the sport’s World Championships.

The fifth edition of the two-day event will offer Olympic places to the top eight teams in the men’s and women’s 4x100 metres, 4x400m and the mixed 4x400m, which will make its debut at the Tokyo Games having featured at the Doha 2019 World Championships.

Asked at a pre-event press conference about Poland’s ambitions to host the World Athletics, Jakub Chelstowski, Marshall of the Silesia region, said: "I believe the next couple of days will demonstrate and prove we can organise events, that we have an excellent infrastructure and a great team and a big heart for athletics.

"We have some procedures and we need to take our time and discuss this, but for the last two years we have been able to demonstrate that we want to be involved in different projects, and we also want to learn lessons.

"We have the national stadium and I’m convinced, and this is also my dream, that we can host events on this level like the World Championships, European Championships - obviously we will be doing our best to acquire [these events].

"We need to demonstrate that we are able to organise events like this.

"We have great hotels and infrastructure, and we have learned a lot from Federation visits about what our approach should be and how best to organise things.

"I am convinced that here in Silesia we will be hosting big events in co-operation with the national and local Government."

"We welcome overtures and interest, particularly from cities and regions that have identified athletics.

"Poland has delivered our Championships at pretty much every level, I’ve been here on so many occasions when they have done that, and I can absolutely understand why they would want to take the next step."

Reflecting on the challenges of the pandemic, during which Poland has delivered both the World Athletics Half Marathon Championships, which took place in Gdynia last October, and now the World Relays, Coe added: "It would have been easier to cancel.

"We recognise that that has been a pattern that some sports have followed.

"But with the support of the Polish Government and local authorities, and the great Organising Committee here, we have driven this, and we are hugely thankful to them."

The United States and Jamaica - top two at the last edition of this event at Yokohama in 2019 - have chosen not to send teams to Silesia because of coronavirus concerns, as in recent weeks have Australia, Canada, while India were unable to board their flight to Poland due to the deadly wave of COVID-19 the country is experiencing.

The US and Jamaica are among those who have already ensured Tokyo 2020 places through reaching relay finals at the Doha 2019 World Championships, but numerous other qualified nations will be taking part in the Silesian Stadium in what serves as a vital warm-up for the Games after the long gap in competitive opportunities.

If any countries already qualified fill places in the top eight, berths remaining to be allocated will be offered according to the World Athletics top performance lists at June 29 this year.

All eight finalists in the men’s and women’s 4x100m and 4x400m, and those two with the next best times, will also qualify for the deferred World Athletics Championships that are scheduled for Eugene, Oregon next year.

In the mixed 4x400m event the eight finalists will be joined in Oregon by the four fastest losers from the opening round.

Of the 16 teams entered in the women’s 4x100m, Italy and Switzerland have already secured their spots for Tokyo.

The hosts are fielding Ewa Swoboda, who was unable to defend her European indoor 60m title on the home ground of Torun last month after testing positive for COVID-19.

In the men’s 4x100m, Brazil will defend the title they earned in Yokohama, where Paulo André Camilo de Oliveira held off the US' fast-finishing future world 200m champion Noah Lyles by just 0.02sec.

Four other nations already qualified for Tokyo 2020 are involved - France, Japan, the Netherlands and South Africa, whose team members spent more than 30 hours travelling to Poland.

The South African team will feature Commonwealth and African champion Akani Simbine, who has already run under 10 seconds three times this year.

Trinidad and Tobago, who ended the United States’ winning run in the men’s 4x400m in Yokohama, will not be present in Poland, and Belgium - with all three Borlee brothers, Jonathan, Kevin and Dylan - can become first European winners.