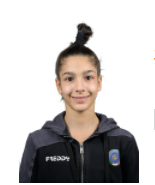 Italy’s 17-year-old Sofia Raffaeli will seek to build on last month’s success in her Rhythmic Gymnastics World Cup debut in Sofia when she competes in the second World Cup of the season set to start tomorrow in Uzbekistan's capital Tashkent.

Raffaeli was one of the revelations of the opening event in this year’s International Gymnastics Federation (FIG) series, where she took silver with the clubs and bronze with the ribbon for detailed routines of unusual artistic and musical sensibility.

"I was not expecting medals," she told FIG.

"The only thing I wanted was to perform my exercises at my best.

"I felt so many emotions!

"It was incredible to compete with the biggest gymnasts whom I have always admired, observed and taken as an example."

Raffaeli, whose mother is a ballet dancer, lives in Chiaravalle on the Adriatic Sea and commutes 100 kilometres a day to Fabriano to be trained by 2012 Olympian Julieta Cantaluppi.

She first came to wider notice when she won three silver medals at the 2019 World Junior Championships in Moscow.

While Raffaeli does not rule out an Olympic run this year, she is taking things one step at a time.

"My first aim this year, as every year, is to improve myself," she said.

"One of my goals and hopes is obviously to compete at the Olympic Games when the federation considers me ready for this competition."

Neither Boryana Kaleyn of Bulgaria nor all-around champion Linoy Ashram of Israel, who earned all the gold medals between them in Sofia, will be competing in Tashkent.

Instead, Raffaeli’s main competition will come from three-time world all-around champion Dina Averina of Russia, who will headline the event along with her twin sister Arina.

Ukraine’s 2019 world medallist Vlada Nikolchenko and Belarusian performers Alina Harnasko and Anastasiia Salos will also be in the mix.

The home team from Uzbekistan will face Belarus, Spain, Israel, Kazakhstan, Turkey, Mexico, and Ukraine in a compact group competition.

The World Cup series is an Olympic qualifying event for individual rhythmic gymnasts, with Olympic tickets for the three highest-ranking gymnasts at the conclusion of the 2021 series.

Tashkent presents another opportunity to earn valuable Olympic ranking points, and many of the frontrunners for the places, including Uzbekistan’s Sabina Tashkenbaeva and Ekaterina Fetisova, as well as Japan’s Chisaki Oiwa and Hungary’s Fanni Pigniczki, will be there in search of points.

In her second World Cup, Raffaeli hopes to deliver with the hoop and ball what she accomplished with the clubs and ribbon in Sofia, implementing improvements she made during the pandemic year.

"It was very difficult for me not to compete because the adrenaline I feel on the carpet is essential," she said.

"However, I took advantage of this forced break to improve many elements."