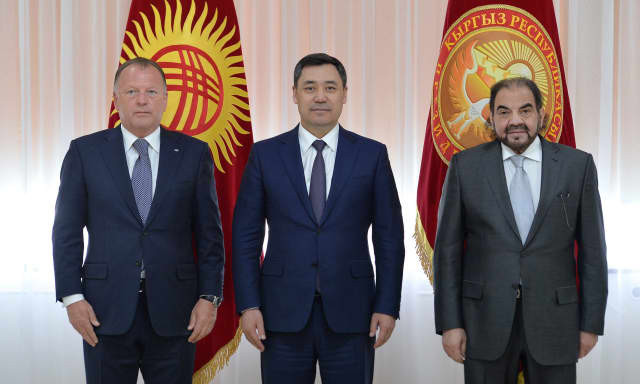 International Judo Federation (IJF) President Marius Vizer met with the President of Kyrgyzstan during his visit to the country for the Asia-Oceania Judo Championships.

Vizer and President of the Judo Union of Asia and IJF vice-president Obaid Al-Anzi met with President of the Kyrgyz Republic, Sadyr Japarov, on the final day of the Championships in the nation's capital Bishkek.

Both parties spoke about the country's plans to develop judo further following the Championships.

Japarov thanked the IJF for the opportunity to host the competition in Kyrgyzstan for the first time.

He added that the Championships were held in line with the most elite events from around the world, stating that he followed the competition closely and noted the benefits of judo.

"We believe that the young generation should be involved with sport and judo is one of prestige, an elite sport to practise," said Japarov.

"The values that judo teaches are important for life and we are proud that our National Federation does an incredible job in promoting the sport."

Vizer congratulated Kyrgyzstan for its first Asia-Oceania Judo Championships gold medal - won by Vladimir Zoloev in the men's under-81-kilograms category - calling it motivation for the younger generation to develop in the sport.

"It is a great honour to meet the President of the Kyrygz Republic, who is supporting the development of a positive sport culture and youth education programme in the country," said Vizer.

"It is incredible to see how fast judo grows here."

The IJF President ended the meeting by inviting Japarov to the World Judo Championships, scheduled to take place in Budapest in June.

Vizer then inaugurated a new judo academy, which looks to further develop the sport in the country, along with Kyrgyzstan Judo Federation President Zholdoshbek Kolbaev and Al-Anzi.

It is designed to allow young judokas, as well as national team members, to practise daily.

"The opening of this kind of training centre is a very big move towards reaching a high level of judo in Kyrgyzstan," said Vizer at the official opening.

"I congratulate the President of the Kyrgyzstan Judo Federation and I wish him luck and success in the development of our sport in his country."

Following the ceremony, Vizer and Kolbaev planted two trees in front of the judo academy, as part of the IJF's commitment to preserve the environment.