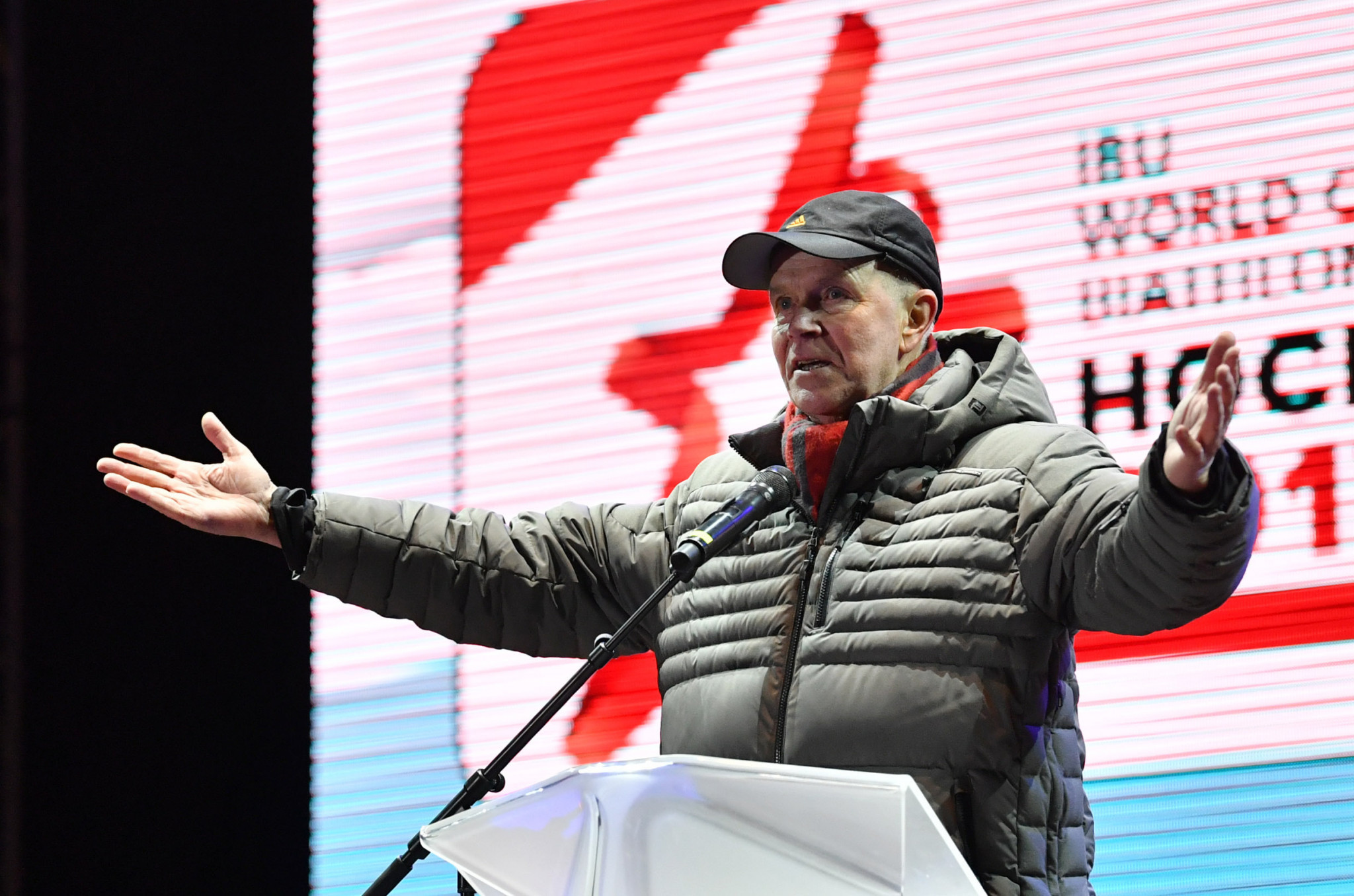 The International Biathlon Union’s (IBU) External Review Commission (ERC) says it has uncovered "evidence of systematic corruption and unethical conduct for a decade", with a final report offering a damning assessment that the governing body’s former President Anders Besseberg had "no regard for ethical values and no real interest in protecting the sport from cheating."

The ERC report has been published following a two-year investigation led by chairman Jonathan Taylor.

The investigation was launched by IBU President Olle Dahlin, following his election, to investigate allegations from the past.

The IBU ERC came about largely as a result of criminal investigations focused on doping, fraud and corruption against the organisation's former President Besseberg and secretary general Nicole Resch.

Both officials are deemed to potentially have cases to answer for breaches of the IBU rules in the period from 2008 to 2018, with the Biathlon Integrity Unit (BIU) now set to determine whether disciplinary action will be taken.

Besseberg and Resch are both currently subject to a criminal investigation, with the IBU ERC stressing that they remain presumed innocent of any wrongdoing.

Both former IBU officials deny all wrongdoing and face no criminal charges to date.

Besseberg, who led the IBU for 25 years before resigning in 2018, has been heavily criticised in the report.

The IBU ERC labelled his commitment to clean sport as being "a charade", which was enabled by "a complete lack of basic governance safeguards that left integrity decisions in the sole hands of the President and his allies on the IBU Executive Board, with no checks and balances, no transparency, and no accountability whatsoever to keep them honest."

Beseberg and his allies were viewed as having done "the absolute minimum that was necessary to preserve a veneer of respectability for the sport."

The Norwegian official was also seen by the Commission to have "consistently preferred and protected Russian interests in virtually everything that he did", with the assessment his support for Russian interests went "well beyond rational bounds".

Besseberg was considered to have allowed Russian Biathlon Union (RBU) President Alexander Tikhonov to remain IBU first vice-president even after he was charged with a serious crime.

He was accused of giving Tikhonov "safe harbour" on the IBU Executive Committee, despite the official later being sentenced to three years in prison following a conviction for conspiracy to commit murder in 2007, albeit he is not serving any jail time owing to an amnesty.

Besseberg was deemed to have made no effort to remove Tikhonov despite the Russian official allegedly attempting to bribe Resch to drop the erythropoietin (EPO) cases the IBU had brought against three Russian national team biathletes in 2009.

The former IBU President has also been seen to have failed to follow up in 2014 when the IBU Executive Board was presented with evidence of an apparent effort by then RBU President Alexander Kravtsov to buy votes at the 2014 IBU Congress or when a used rEPO syringe was found on the track at the 2015 IBU World Cup event in Antholz-Anterselva.

The Commission said Austrian and Norwegian criminal authorities have identified evidence sufficient to warrant setting up a joint taskforce to investigate a bribery allegation against Besseberg, made by former Moscow Laboratory head Grigory Rodchenkov.

The Commission added it has identified "extensive provision of favours by the Russians to Mr Besseberg, particularly in the form of free hunting trips and the services of prostitutes."

Besseberg has also been accused of seeking to downplay the Russian doping scandal that broke in late 2014 and 2015.

The World Championships were later removed from Tyumen.

The Commission said despite having relevant information, it has not gathered specific evidence to substantiate allegations that delegates at the 2016 IBU Congress were bribed to vote for the Tyumen bid.

Tyumen did, however, host the 2018 IBU World Cup final.

The Commission said Besseberg used his double, casting vote to defeat a motion at the Executive Board to move the event, before telling members that they could be held "personally liable for the losses of the local Organising Committee, and may lose their houses, if they took the event away from Russia after the hosting contract had been signed."

Resch was found to have been "worried about Mr Besseberg’s clear pro-Russia stance", but is also considered to have several cases to answer for breach of the IBU’s rules.

The former IBU secretary general was deemed to have "failed to react" to highly abnormal values of Russian biathlete Evgeny Ustyugov at the Sochi 2014 Winter Olympics.

The Commission said it could find "no excuse" for Resch’s failure to order the immediate collection of further blood and urine samples from Ustyugov, who later won gold as part of Russia’s men’s relay team.

She is considered to have a case to answer over potential complicity in Mr Ustyugov’s blood-doping anti-doping rule violation, as well as placing the IBU at risk of non-compliance for failure to investigate the apparent rule violation properly.

Resch could also face disciplinary action over allegedly colluding with Besseberg to stifle an investigation into the used syringe at the 2015 IBU World Cup in Antholz-Anterselva.

The Commission said evidence showed Resch sent a sample of one athlete to a laboratory to check for a DNA match but no others, while the Commission says evidence shows the governing body did not sent it to the police and have checked all athlete records from the past 10 years, as she had claimed.

Clear evidence has reportedly been uncovered that Resch took control over the IBU anti-doping programme to "disempower and block any oversight of that programme by the IBU Medical Committee", as well as having "dragged her feet over arranging for the external oversight of the IBU's ABP [athlete biological passport] programme that is required under the WADA rules."

The Commission said this may have been an attempt to "aggregate power under her control and limit proper oversight", rather than helping to cover up Russian doping.

Resch was not found to have acted to divert or delay investigations over Russian doping presented in the McLaren report, although she has been considered to have been cautious about bringing cases which were not based on positive tests.

The former IBU secretary general was seen to have favoured moving the 2018 IBU World Cup final from Tyumen and was not considered at fault for a delay in the IBU Working Group pushing forward with four cases based on LIMS data.

The Commission, however, has suggested she could be in breach of IBU rules for allegedly providing strategic advice about "how best to pursue the appeals to CAS [Court of Arbitration for Sport] of Sochi medal winners Zaitseva, Romanova, and Vilukhina", as well as offering further "undercover assistance."

The Commission did conclude that the IBU did not transfer any "dirty" ABP profiles to the RBU or RUSADA to be buried.

The damning report has been shared with criminal authorities investigating Besseberg and Resch, while the Commission has recommended the IBU share the findings with current and former athletes.

More than 70,000 documents and electronic files were reviewed during the investigation, including criminal files, WADA investigation files, IBU internal documents, documents provided by RBU and RUSADA, and analytical data from IBU testing and WADA-accredited analysis of doping samples.

Around 60 people were interviewed as part of the investigation.

Besseberg declined to be interviewed while the criminal investigation was pending, while Resch was "unable to submit to interview within investigation timeline due to health reasons."

The Commission said it had received statements from Besseberg and Resch, which were given to criminal authorities.

The Commission's mandate had also included helping to strengthen the IBU’s governance structure.

This process was completed at the 2019 Congress, which saw a new Constitution adopted, introducing eligibility criteria assessed by a Vetting Panel, term limits for IBU officials, a new IBU Integrity Code and the BIU created.