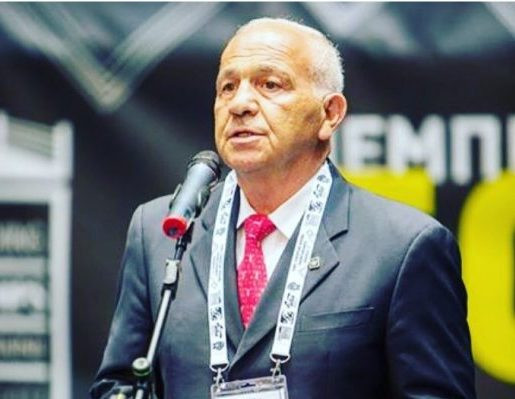 Kremlev was appointed AIBA President earlier this month during a virtual Extraordinary Congress.

In his newsletter, Falcinelli acknowledged the difficult task facing Kremlev and thanked Interim AIBA President Mohamed Moustahsane for his time in charge of the embattled governing body.

Falcinelli also recognised the efforts of the two other European Presidential candidates - Suleyman Mikayilov of Azerbaijan and Boris van der Vorst of The Netherlands.

"After Nikiforov Denisov in 1978, again a Russian, Umar Kremlev will have a difficult and historic task to bring our glorious International Federation back into Olympic Movement of which it has been an integral part since its birth," he said.

"Even in this dramatic period, AIBA continues to be the reference point for all members of the National Federations with dignity and efficiency.

"The courage to hold an Ordinary Congress in online form, which many did not give much confidence, turned out to be a valid and democratically correct formula.

"Honour to the other two European candidates, Suleyman Mikayilov and Boris van der Vorst for their fascinating electoral programmes.

"With President Umar Kremlev the era of reforms begins."

Falcinelli also discussed the approval of the new AIBA Constitution, which was passed to appease the IOC after it stripped the governing body from any involvement in the boxing tournament at the Tokyo 2020 Olympics because of concerns over its governance, finances and refereeing and judging.

Two proposals put forward by Falcinelli had been accepted for the Constitution, both of which prevent AIBA directors from having any influence on referees and judges.

"I thank the Reform Commission for having unanimously accepted my proposal, which is the result of my and other colleagues professional experience gained over many years of international boxing activity," Falcinelli said.

Falcinelli ended the newsletter by highlighting two EUBC events that were able to take place in November despite the COVID-19 pandemic.

"Willpower, courage, knowledge and desire not to stop plus mandatory application of all strict anti-COVID regulations have distinguished these two events for our young athletes," Falcinelli said.

"Unfortunately, we were unable to have the presence of many European nations, but despite this the participation was on high level.

"The Youth Championships saw the presence of 22 countries and 183 athletes and 20 nations took part in the Junior Championships with 207 athletes.

"These numbers prove the desire of National Federations to return to competitive activity and I am happy that even in this difficult period many boys and girls were able to demonstrate their boxing qualities and brought important medals to their countries."