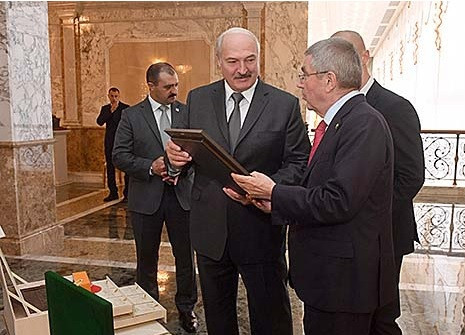 The IOC has been investigating allegations that athletes have been tortured, beaten and arrested for speaking out or participating in demonstrations against Lukashenko amid a heavy-handed Government crackdown following his controversial re-election in August - widely dismissed as neither fair nor free.

IOC President Thomas Bach revealed that National Olympic Committee of the Republic of Belarus (NOCRB) head Lukashenko and other senior members of the organisation "had not appropriately protected the Belarusian athletes from political discrimination within the NOC, their member sports federations or the sports movement".

"This is contrary to the fundamental principles of the Olympic Charter, and therefore seriously affects the reputation of the Olympic Movement," Bach said.

The IOC Executive Board has also suspended all financial payments to the NOCRB, except for those "related to the preparations of the Belarusian athletes for, and their participation in, Tokyo 2020 and Beijing 2022".

It has urged International Federations governing sports on the Tokyo 2020 Olympic programme to "make sure that all eligible Belarusian athletes can take part in qualification events for the upcoming Olympic Games without any political discrimination".

Lukashenko, who missed London 2012 because of a visa issue following a Government crackdown in the country after a disputed election, is one of three senior NOCRB officials to be provisionally sanctioned with exclusion from the Olympics for their role in the scandal, which has seen numerous athletes imprisoned and discriminated against by the organisation.

Viktor Lukashenko, the President's son and vice-president of the NOC, and Belarusian Ice Hockey Association President and NOCRB Board member Dmitri Baskov - considered a suspect in an attack on artist Raman Bandarenka, who later died in hospital, during a peaceful protest in Belarus - have also been hit with the provisional measures by the IOC.

The IOC had opened a formal procedure into the NOCRB late last month because of "the growing number of worrying reports concerning athletes, officials and sports in Belarus".

Its investigation into the allegations raised by athletes continues and the IOC has warned it could take further action against the NOCRB, opening up the possibility of the country's flag being banned from Tokyo 2020.

Bach promised, however, that the decision from the Executive Board would not impact on athletes hoping to compete at the rescheduled Games, "at least not at this moment in time".

"The IOC Executive Board will continue to monitor the situation and reserves the right to consider any further action or to remove any of these provisional measures depending on the evolution of the situation," the IOC said in a statement.

A group of Belarusian athletes had urged the IOC to suspend the NOCRB, but a separate coalition of competitors, seemingly with the support of the Lukashenko regime, rejected those calls.