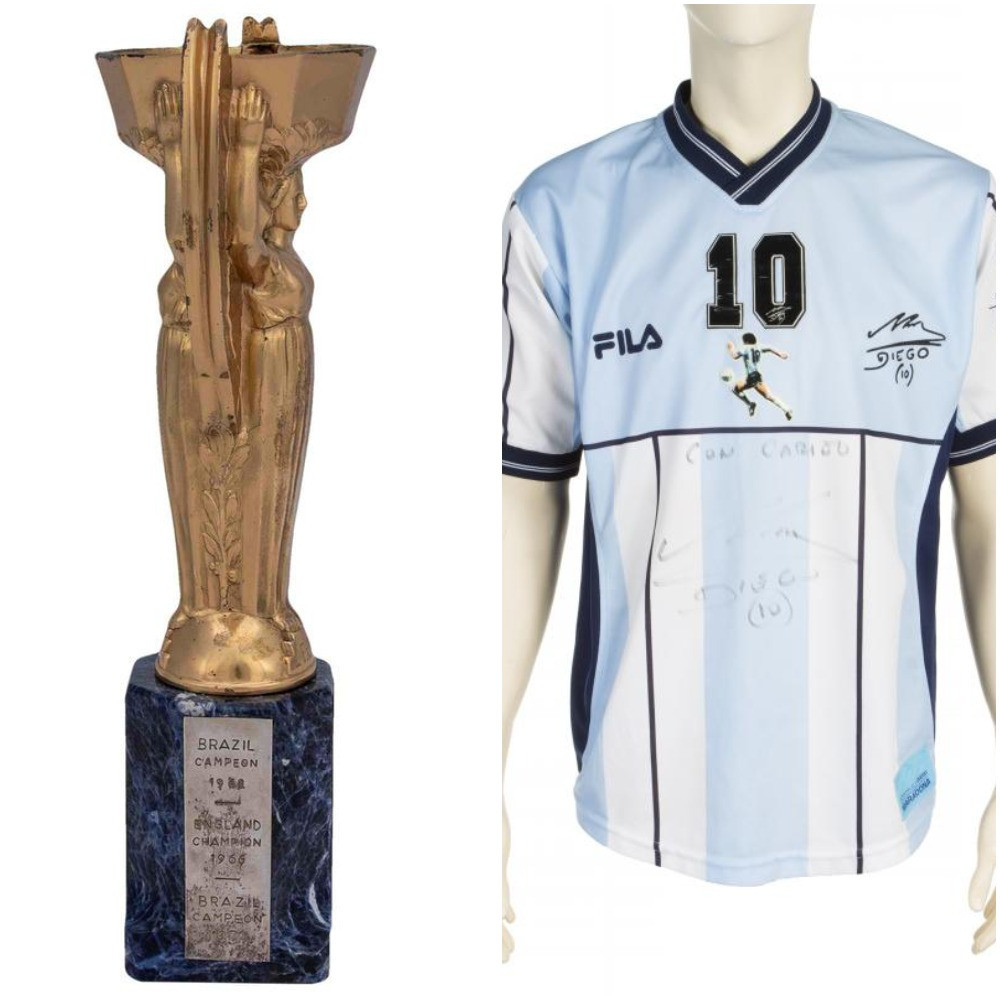 Items from the careers of Diego Maradona and Pelé are being auctioned this week, including a jersey from the Argentinian's testimonial match and a unique replica of the World Cup awarded to the Brazilian legend by FIFA.

Julien's Auctions have taken advantage of the upsurge in interest in Maradona following his sudden death last Wednesday (November 25) by adding several items to its Icons & Idols Trilogy: Sports auction on Friday (December 4).

These include a ball game used and signed by several Napoli players, including Maradona, during the 1988-1989 Italian Championship "Calcio" season and a framed display featuring jerseys signed by both him and Pelé.

Early bidding has seen strong interest in the FILA brand Argentina national team commemorative jersey signed by Maradona from a testimonial match given in his honour in Buenos Aires in November 2010.

The most famous shirt Maradona wore, however, has not so far been up for auction, even though it is claimed it could fetch as much as $2 million (£1.5 million/€1.7 million).

It is the shirt that Maradona wore during Argentina's 2-1 victory over England in the quarter-final of the FIFA World Cup in 1986 - the match famous for the "Hand of God" but which also featured a goal voted the best of the 20th century.

The shirt, currently on display at England's National Football Museum in Manchester, was given to former England international Steve Hodge by Maradona himself after the match in Mexico City.

David Amerman of Goldin Auctions in New Jersey believes the shirt could well smash records if Hodge wanted to sell it.

"It's very difficult to gauge [the value] with the 'Hand of God' jersey, but I know that the owner was looking for a $2 million private sale," Amerman told Reuters.

"It certainly could be a possibility, the values have jumped quite a bit in soccer."

Hodge, however, denied the report he was looking to cash in on the shirt.

"I just find it totally wrong and disrespectful," Hodge told The Sun.

"It is not for sale.

"I have had it for 34 years now and I have never once tried to sell it or hawk it, and definitely not at the moment.

"For me it has incredible sentimental value because it was the pinnacle of my career at 23."

The replica Jules Rimet trophy created for Pelé was awarded to him after he helped Brazil win the World Cup for a third time in 1970.

The one-of-a-kind trophy is among several top-of-the-range items being offered in a joint sale between Sotheby's and Goldin Auctions, including Muhammad Ali, Babe Ruth, Wayne Gretzky and Rafael Nadal.

That would mark a big increase on when it was sold for £395,000 (£526,000/€440,000) four years ago in London, at a sale of Pelé's personal collection organised by Julien's Auctions, when Swiss watchmaking giant Hublot made the final bid.

The current world-record price for an item of sports memorabilia was set in December 2019 when Pierre de Coubertin's 1892 Olympic Manifesto sold in New York for $8.8 million (£6.6 million/€7.3 million), eight times the expected price.

It was bought by Russian oligarch Alisher Usmanov, the President of the International Fencing Federation, who donated it to the Olympic Museum.