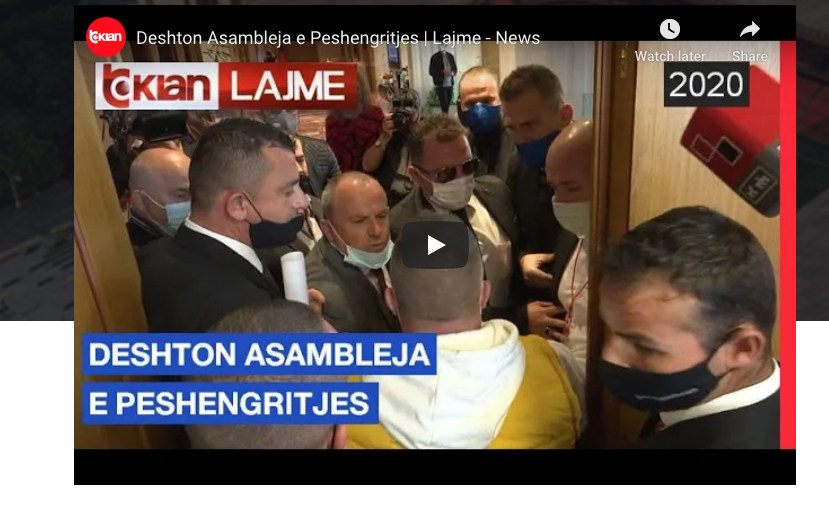 There were chaotic scenes at the Albanian Weightlifting Federation's (AWF) electoral assembly when organisers refused admission to supporters of a former President who had been disqualified as a candidate because of his links to doping scandals.

Elez Gjoza, who was trying to return after resigning as President in early 2018 when a World Championships medallist tested positive for a second time, did make it into the venue.

He said he did not accept the decision to bar him, made by an AWF vetting commission two weeks ago, and demanded that the decision be repealed.

Two members of the Gjoza camp were also blocked from standing for the AWF Board.

The three-man commission had decided that, because Gjoza was President of the AWF during a period of multiple doping violations, he was "unsuitable to meet the statutory criterion of being a pure moral figure in the field of sport".

The man who set up the vetting commission, Theodhor Masllavica, was the standing President and a contender to continue in the role when that decision was made.

But he resigned from the AWF and withdrew as a candidate two days before the election, apparently after threats of violence against him but officially for "personal reasons".

That left only one candidate, Eglantina Cuni, who was in line to become the first female President of the AWF.

But she failed to gain any support from delegates and, as the election failed, a new one will be staged on December 14 when Gjoza expects to be cleared to stand.

Albania's National Olympic Committee (KOKSH) said it would not intervene and it was "up to the weightlifting federation" to decide on the next steps.

Gjoza's supporters were involved in a rowdy showdown at the Tirana International Hotel and Conference Centre, pushing and shoving doormen who refused them entry.

Delegates inside the building, most of whom appeared to support Gjoza's argument, would not back lone candidate Cuni, a coach who said she had plans for increasing participation and for education of athletes and coaches.

Media reports suggested that a senior political figure in Tirana, the capital city, had issued threats against Masllavica, who said his resignation was "irrevocable".

Gjoza told local media he was "concerned and indignant" about being disqualified as a candidate, and said the AWF assembly had the right to decide who could stand but the commission did not.

"The Assembly is all-powerful," he announced.

Gjoza resigned the AWF Presidency just under three years ago, after Romela Begaj tested positive at the 2017 International Weightlifting Federation (IWF) World Championships in Anaheim, California, where she won a snatch gold and an overall silver at 69 kilograms.

She was eventually banned for eight years for the second offence and now lives in Canada.

Albania has had 11 doping positives since 2008 and can send just two men and two women to Tokyo 2020, half the maximum allowed.

Weightlifting is a successful, high-profile sport in Albania and Begaj's second doping violation caused such an uproar that Gjoza stood down and Albania had to withdraw at short notice as hosts of that year's European Championships.

Evagjelia Veli, who had finished eighth at the Rio 2016 Olympic Games at 53kg, was suspended for two years.

The board of KOKSH voted to suspend weightlifting, and dropped the sport from its team for the Mediterranean Games in Tarragona, Spain in July 2018.

KOKSH said "bad governance" was rife and criticised "a system created by the Albanian Weightlifting Federation that does not support clean athletes, that gives no chance to young athletes".

The AWF had refused a proposal to educate its coaches in Hungary, and had never taken any responsibility for the series of positives that reduced Albania's athlete quota for Tokyo.

Masllavica, who had taken over from Gjoza, was among those criticised as he had reportedly failed to make any public comment about the sport's problems, or plans to solve them.

The KOKSH view was that "only athletes have been punished, not one coach, not one administrator or policy maker for the national federation".

KOKSH had shown its support for weightlifting by securing an International Olympic Committee scholarship for Veli, only for her to test positive.

The KOKSH President, Viroz Bezhani, told insidethegames: "I think that the measures we took as NOC were positive because since that period (the 2018 suspension) no athlete has been caught with doping.

"So there has been awareness to do pure sports without doping."

On the validity of the commission's ruling against Gjoza, and the failure of the assembly to elect a leader, Bezhani said: "The Olympic Committee has never interfered in the internal affairs of the (weightlifting) federation.

"I have not read the statutes of the federation and I cannot give any opinion whether it is right or not.

"If the commission has implemented and followed the statute, it has made the right decision, if not it has made a mistake.

"Even when I was asked to give an opinion on the situation (at the assembly) I stated that this is a meeting of your federation and I will only observe and report to the NOC."

He pointed out that support for the sport had been restored.

"We hope that the two weightlifters, for the first time in the history of Albanian sports, bring Olympic medals to Albania," said Bezhani.

"This would be a great success for us."

Albania has never won a medal in any sport at the Olympic Games.