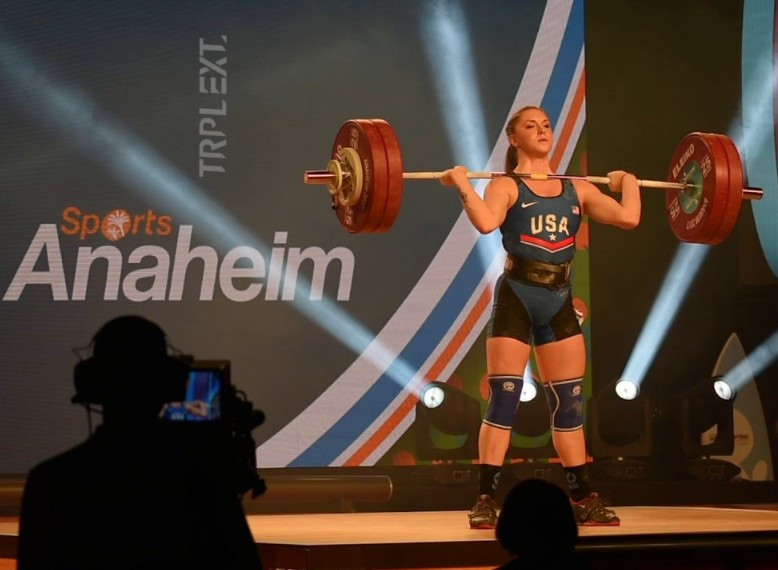 Mattie Rogers has moved up the World Championships podium after a career-ending doping suspension was imposed on an Albanian medallist.

Romela Begaj, who carried the flag for Albania at the Opening Ceremony of the 2012 Olympic Games in London, has been banned for eight-years by the International Weightlifting Federation (IWF) after testing positive in Anaheim at the 2017 IWF World Championships.

News of her ban and disqualification, after a long but futile attempt to prove her innocence, was sent to the Albanian Federation this week.

It means Rogers - whose 700,000 followers make her the world’s most popular weightlifter on social media - moves up from the bronze to silver medal in the snatch and the total for the women’s 69 kilograms.

That was, retrospectively, the best World Championships performance by an American since Robin Goad won gold in 1994 - until Sarah Robles won the super-heavyweights a few days later in Anaheim..

Begaj swore her innocence on the Koran in front of Albanian cameras, and spent her own money trying to convince the IWF that she was the victim of "sabotage", but she had no evidence.

When the positive was announced, Begaj’s husband and coach, the former boxer Gazmend Hackani, said, "This is a game of the International Federation to favour the American who came third."

Begaj is believed to have used the "plot in favour of the Americans" claim in her IWF hearing, but she got nowhere with her accusations.

"I'm from a poor family and I've been through many difficulties since my childhood," said Begaj, a former circus performer.

"Weightlifting is the only source of income for me and I would never do anything to ruin my career."

Begaj and her husband have given up plans to take the case to the Court of Arbitration for Sport as, besides having no evidence, they do not have any support from the sporting authorities in Albania.

They are now spending some time in Canada and may move there, according to a source in Albania.

It was Begaj’s second doping suspension and, as she will be 41 when it ends, she will not compete again.

Begaj tested positive for stanozolol in Anaheim, the same substance for which she failed a test at the 2014 IWF World Championships in Kazakhstan.

In taking the snatch in Almaty, Begaj had become Albania’s first female gold medallist at a World Championship in any sport - only to lose it on disqualification.

Albania was also forced to withdraw from hosting the 2018 European Championships, which were moved to Romania, and a new Executive Board has since been appointed for Albanian weightlifting.

Begaj’s second ban takes Albania to 10 suspensions since 2011, which will lead to a reduced quota of places at next year's Olympic Games in Tokyo 2020.

Any nation with 10 or more positives since 2008 can send only two men and two women to Tokyo, compared to the maximum of four and four.

The snatch gold in Anaheim will now go to the Colombian Miyareth Mendoza, who also moves from fourth to third overall.

The snatch bronze will go to another Colombian, Leidy Solis, who was the winner on total.

Rogers, 23, a former cheerleader and gymnast, also won a medal in Ashgabat in Turkmenistan, at the 2018 IWF World Championships.

She was third in the clean and jerk at 71kg, and finished fifth overall.

Phil Andrews, chief executive of USA Weightlifting, said, "Firstly we want to congratulate Mattie on her outstanding performance at the 2017 Worlds.

"Our sport must continue to educate, test and enforce strong steps to protect clean athletes like Mattie, and it is refreshing to see the continued commitment of the IWF to do just that."