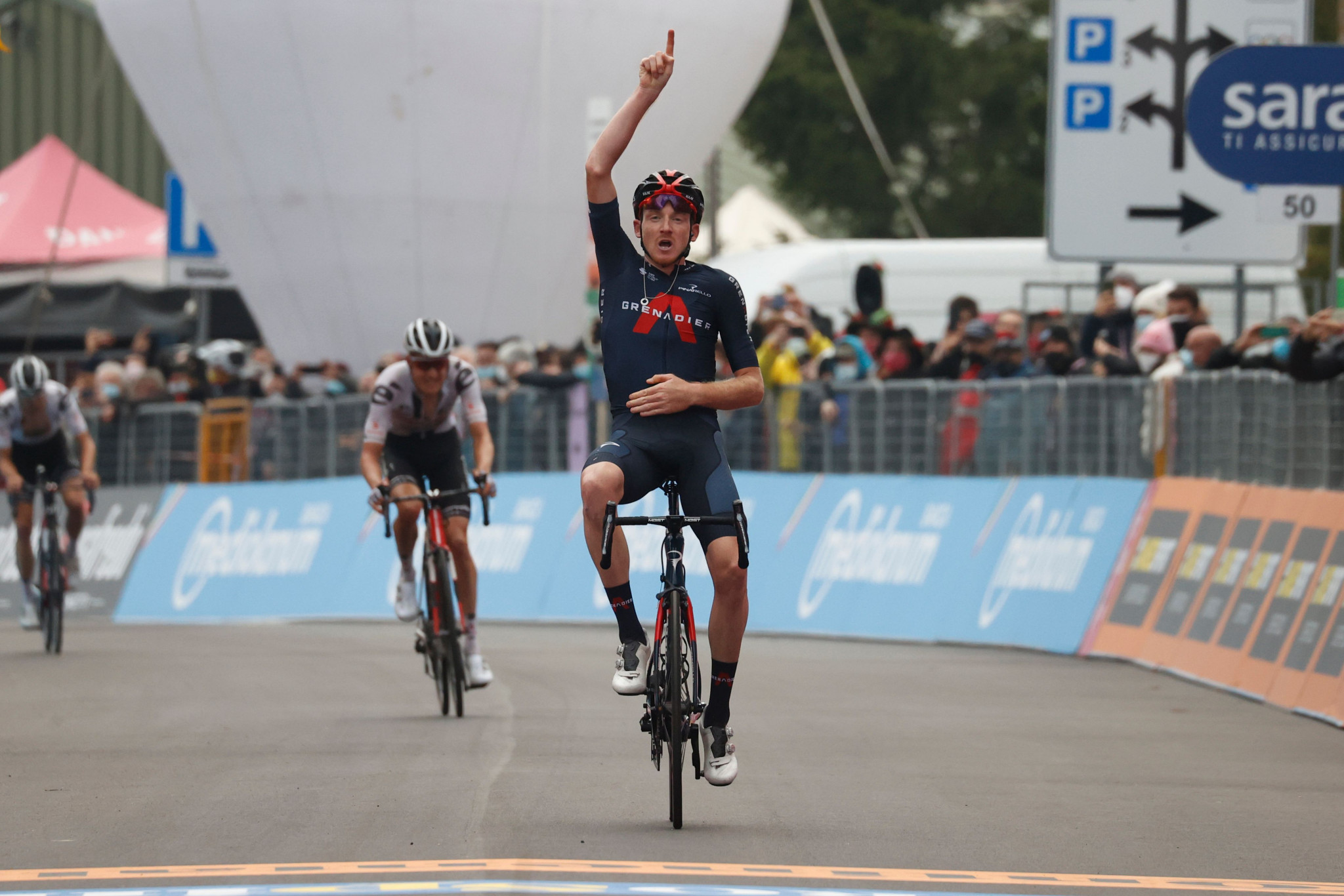 Britain's Tao Geoghegan Hart closed in on the podium spots in the general classification of the Giro d'Italia after outkicking two of the top three on the mountainous stage 15 in Piancavallo.

The Ineos Grenadiers rider moved into fourth in the overall standings after finishing with a two-second gap behind to The Netherlands' Wilco Kelderman of Team Sunweb, who remains second in the general classification.

Kelderman's teammate, Australia's Jai Hindley had another impressive day - finishing four seconds behind the Briton after coming up short on the final day.

Portugal's João Almeida looked exhausted when he crossed the line in fourth and will appreciate tomorrow's rest day having finished 37 seconds behind the race winner, allowing Kelderman in second to close the gap to just 15 seconds.

The Deceuninck-Quickstep rider holds onto the pink jersey ahead of the Dutchman with Hindley and Geoghegan Hart still far behind - currently sitting 2min 56sec and 2:57 behind respectively.

On the third mountain stage of the Giro d'Italia from Base Aerea Rivolto to Piancavallo, the race leader took a hit but still remains with a slender lead.

"For me crossing the finish line first it's something really incredible. This one is for Nico Portal".

Poland's Rafał Majka finished fifth in the stage ahead of his Austrian Bora-Hansgrohe teammate Patrick Konrad, with the pair 1:22 and 1:29 off the pace respectively.

The stage 15 winner dedicated his victory to French rider Nico Portal who died in March.

"This one was for Nico Portal, we lost him this spring and I think it’s been really difficult for the team," said Geoghegan Hart.

"We’ve had some great highs this season but also some big lows in the Tour, for me personally and in this race.

"We just had to show the Grenadier spirit we try to foster in this team and try to bounce back as we know we can.

"It’s been such an up and down race for us.

"Everyone in our team has been in a top four minimum, so I’m really honoured to be part of this team and to be a Grenadier and to be in this Giro.

"I lost some time in the prologue and the plan for the whole team was to support Geraint (Thomas) for the victory and I really think he would have been on the podium if not better.

"I’m behind on the general classification but I really wanted to win today.

"I’ve only won a few races in my career and so this is something truly incredible."

"I took the radio off before. I couldn't hear anything, I was just so focused on doing the best I could".

Meanwhile, Almeida stated his gratitude as he continues to hold onto the pink jersey, which he has held since stage three.

"I have to be very grateful to the team for all their work," said Almeida.

"I felt good today but there were stronger riders out there and so congrats to them.

"In the last one or two kilometres I thought I could come back to them.

"Then I was just pushing my limits, it was a suffer fest all the way to the finish.

"I took my radio out because I was so focused on doing the best I could.

"I was doing everything I could to keep the jersey."

Tomorrow sees a rest day for the peloton, before stage 16 takes place on a 229km route from Udine to San Daniele del Friuli on October 20.