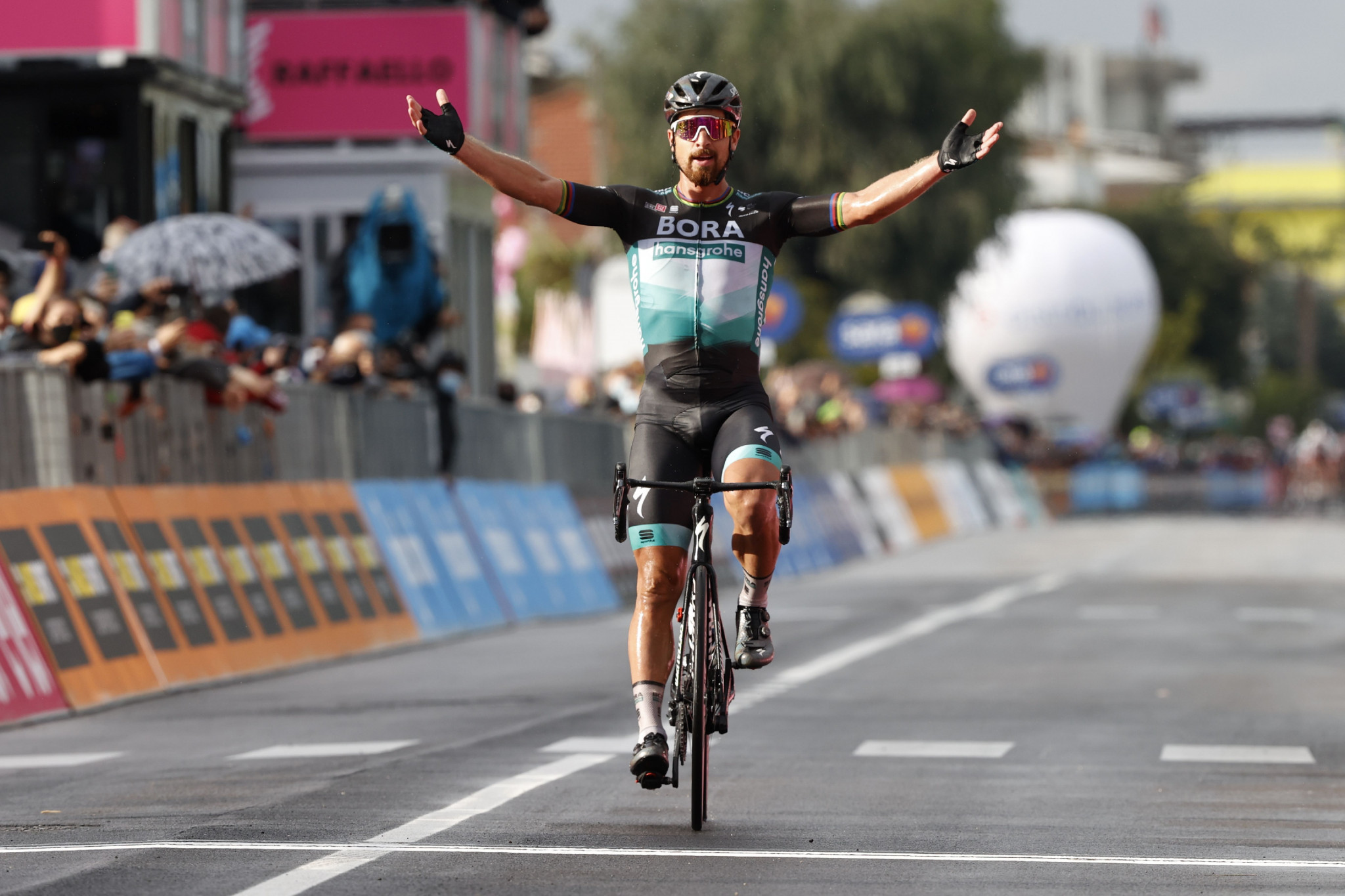 Peter Sagan claimed the first Giro d’Italia stage victory of his career as the three-time world champion soloed away from a breakaway group in Tortoreto.

The 177-kilometre stage 10 began in Lanciano with the news that neither Mitchelton-Scott or Jumbo-Visma would take to the start, following positive coronavirus tests.

Mitchelton-Scott withdrew after four staff members tested positive on the rest day, with Jumbo-Visma following as their team leader Steven Kruijswijk also has the virus.

A breakaway group eventually formed on the hilly stage, with Bora-Hansgrohe’s Sagan featuring in the move.

Italy’s Filippo Ganna, Dario Cataldo and Davide Villella were among the 11 riders in the day’s key breakaway, as well as Britain’s Ben Swift.

A series of attacks came inside the final 50km of the race, with the riders facing six climbs on increasing wet roads.

Sagan and Swift were able to move clear on the penultimate climb of the day, with the Slovakian dropping his rival on the final ascent.

Sagan, who has been without a victory since last year’s Tour de France, was able to remain clear on the descent to triumph in a time of 4 hours 1min and 56sec.

He now boasts stage wins at all three of the Grand Tours, with this year marking his first appearance at the Giro d’Italia.

"I'm for sure very happy to get my first ever victory at the Giro d'Italia," Sagan said.

"It's been a long time since the last one.

"Many riders didn't want me to be in the breakaway, then today it was hard to stay away because we were chased down.

"Closer to the finish I attacked to look for the stage win.

"At the end it's a very good day for me.

"Since the start in Sicily the Giro has brought us to beautiful places, I always like to race and win in Italy."

American rider Brandon McNulty broke away from the general classification group to finish 19 seconds behind Sagan in second.

Race leader João Almeida of Portugal finished third at 23 seconds down, with Swift ending fourth on the same time after being caught by the main group in the closing minutes.

Denmark’s Jakob Fuglsang saw his general classification challenge dealt a blow, after the Astana rider suffered a mechanical issue on the final climb which led to him losing a minute on his rivals.

Almeida leads the general classification by 34 seconds from The Netherlands’ Wilco Kelderman.

Spain’s Pello Bilbao is third 43 seconds, after an attempt at a long-range attack on the stage proved fruitless.

Tomorrow should see the riders contest a 182km flat stage from Porto Sant'Elpidio to Rimini.