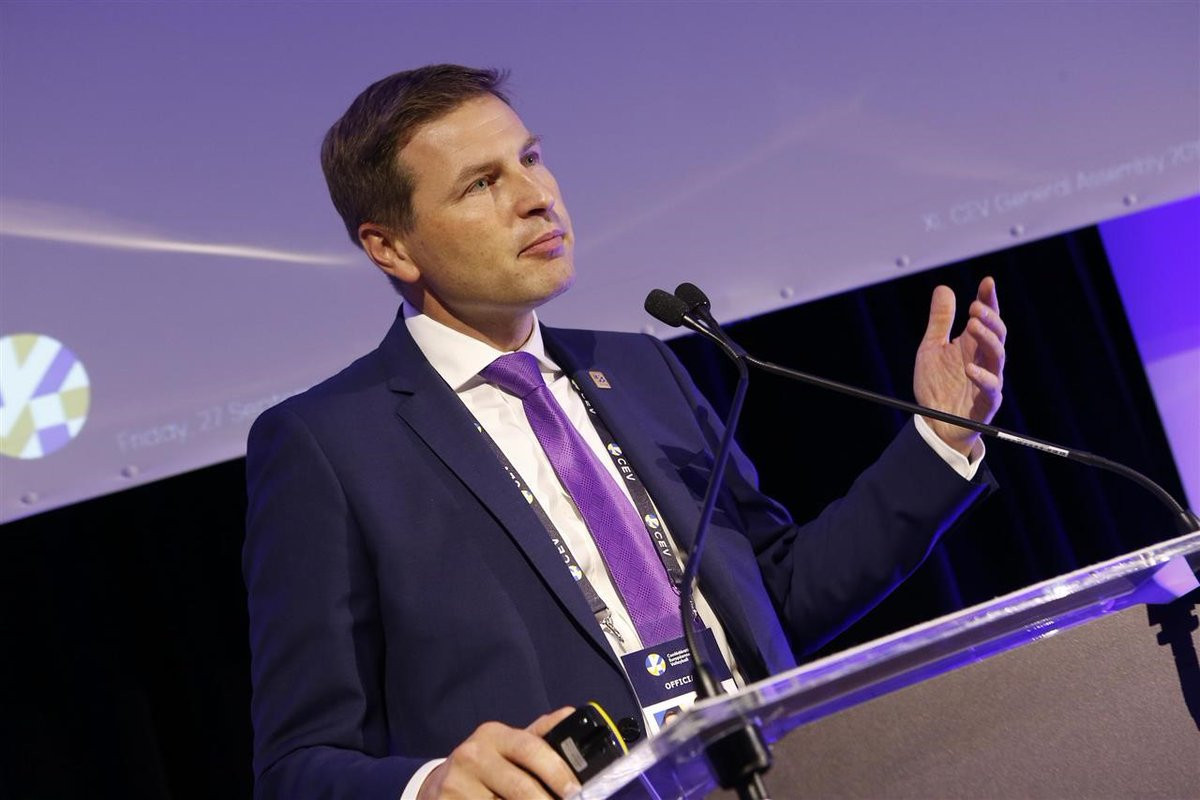 Presidential candidate for the European Volleyball Confederation (CEV), Hanno Pavkur, has criticised the governing body for its decision to keep the CEV Congress in person despite the threat of the COVID-19 pandemic, calling it a "huge risk".

Speaking to insidethegames today, the Estonian reinstated his belief that it was not safe enough to travel for the event and should be held online instead.

CEV decided to move the Congress from Moscow in Russia to Vienna in Austria due to the threat of the COVID-19 pandemic, with the Central European nation being deemed safer to travel to.

However, Pevkur states that there are still concerns over the safety of the new host city with travel restrictions still able to change overnight.

This is currently scheduled for October 16 in the Austrian capital.

To be clear: this change of location does not change anything. We are badly letting down our NFs by expecting them to put their health at risk, and many will not be able to attend. It is not normal to insist on an in-person Congress at this time. @CEVolleyball @insidethegames https://t.co/ZbI7njj6WU

"When there is a chance to hold a Congress online, why don't we do it?" said Pevkur.

"One issue is going to Vienna and participating there, the other side is that you have to also come back.

"Most of these [National Federations] Presidents are doing this voluntarily and Austria is a risk country to many other European countries.

"When they come back home they either have to stay in quarantine or in self-isolation and nobody is ready to take two weeks isolation instead of going back to work."

He also stated that his calculations show that it would financially assist nations and the CEV by hosting the event online due to the hardships caused recently by the COVID-19 pandemic.

Pevkur estimated the cost of hosting the CEV Congress online from a platform would be in low five figures, estimating the cost of the videoconference from one provider at around £10,000 ($12,900/€11,000).

"It is much cheaper to host it than in-person when you have to get 56 countries to Austria and pay for hotels," added Pevkur.

"I have spoken to most of the National Federations and many have yet to make a decision on whether they are going.

"I know some who have stated they will go or not go, but still could reconsider.

"At the moment, I assume that one third of the countries will not go, but the situation can change.

"Some have said they are going, but if Austria ends up being a risk country, they will not go."

He also stated the proxy rule which could endanger the event going ahead as planned, giving a hypothetical situation as an example where the Congress would not be able to be held.

A proxy vote allows a nation to vote on behalf of another, meaning at least 28 of the 56 members have to be in attendance, as well as vote for an absent member too.

Travel restrictions could change in nations too, prohibiting or discouraging travel to certain countries such as Austria.

Social restrictions could also limit certain gatherings of people, which could lead to the CEV Congress not going ahead as planned.

"It is not something I desire, I prefer to be together with people and speak about my ideas and speak with them personally, but as the situation is so difficult and we can see there is a second wave in Europe facing us at the moment, it is the logical step to not gather in person.

"But I also understand for Aleksandar (Boričić, CEV President) it is very important to be in person there.

"The most important thing is that the Congress makes a decision as soon as possible because it can be quite difficult to keep the proxy.

"As soon as we know who is coming and not coming we can also find a solution."

Pevkur also stated that he could be open to a hybrid event that allows people to be either present in person or remotely to vote.

Previously focusing on a career in politics, Pevkur is the former chairman of the Estonian Reform Party and also held various Ministerial positions in the nation's Government.