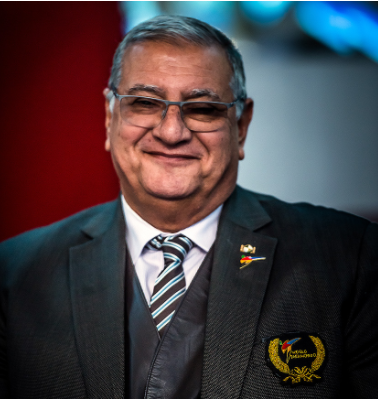 World Taekwondo vice-president Ahmed Fouly of Egypt has died at the age of 70.

Choue said the sport "had lost a great man" and his contributions to taekwondo "would never be forgotten" in a letter to the organisation's vice-presidents, Council representatives and Member Federations.

"Since 2001 when he became a member of the World Taekwondo Council and especially since 2004 when I appointed him as vice-president of World Taekwondo, General Fouly dedicated his life to elevating our beloved martial art and sport to what we are today – one of the best governed Olympic and Paralympic international sport federations in the world," Choue wrote.

"For those of us who know General Fouly personally, we have lost a great friend and brother.

"Throughout my Presidency and especially in my personal life, General Fouly was one of the most trusted, trustworthy and supportive friends that anyone could have had.

"I was truly blessed to have met General Fouly and to have called him my brother.

"Our brother may be gone, but his contributions to taekwondo will never be forgotten.

"My memories of General Fouly and love for him as my brother will never be forgotten."

Fouly, a longstanding President of the Egyptian Taekwondo Federation, had overseen increasing success for African countries in the sport.

African taekwondo players earned five medals at the 2016 Olympic Games in Rio de Janeiro, including Cheick Sallah Cissé of the Ivory Coast's gold in the men's under-80 kilograms division.

"In his capacity as President of World Taekwondo Africa, General Fouly oversaw the meteoric rise of taekwondo in the region," Choue said.

"Five medals from Africa under his leadership at the Rio 2016 Olympic Games truly demonstrated the universality of taekwondo to the world.

"Taekwondo is now one of the most popular sports in Africa, and continues to produce champions on and off the mat."